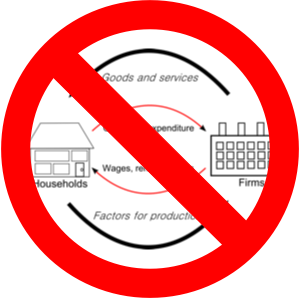 No to Keynes' Circular Flow

The essential idea of a Liquidity Trap as expounded by J M Keynes in this “General Theory” is that there is a point in time, when the interest rate has fallen so low, that investment bonds, be they public or private, are returning so little, that the investor then decides to keep all his money as a cash balance. This then snuffs out any further economic activity that may have been brought about by the former investments. There is a general freezing up in the economy and a Recession becomes a Depression.

It is fashionable in all sectors of the media, politicians and economists to say that they  think this event is happening right in front of our very own eyes

In the famous circular flow of income that the Keynesians adhere to, one man’s spending is a another man’s income.

Is it possible that a person would not spend anything in a Liquidity Trap? I think not. All people have to buy their day to day food stuffs, pay for heating, pay for shelter and other such basics.

We actually have a situation where we have the balance sheets of Central Banks showing cash reserves increasing to startling percentages since the start of the recession in August 2007 with  a massive uplift since the Lehman Brothers crash on September 15th 2008 at 07:58. In the USA there are $760 billion of extra cash reserves that now sit in the USA banking system, some 123% more than the same period a year ago. By July of this year, the BoE had increased its balance sheet by £153 billion or 158% over the same time last year.

It would seem that the Keynesians have a point: there is all this cash in the system, untold amounts of liquidity that we have never seen before, and it is not being spent. Is this not the classic Keynesian circumstance in which a Liquidity Trap emerges? This is when silly Monetarist ideas of sprinkling money “from a helicopter” come into vogue: I recently saw a very nutty idea being put forward in the FT by Wolfgan Manchau saying that we should have some electronic devise inserted into money that makes it expire as legal tender after a period of time so people are forced to spend:

Central banks could deploy policies to discourage cash hoarding. One extreme possibility would be to stamp cash, putting an expiry date on banknotes that would force their holders to pay a fee equivalent to the negative interest rates.

Seemingly, people with these views are so divorced from reality they have forgotten, or perhaps never knew, how real wealth is created. I have explained this within Can the Manipulation of Interest Rates Create Wealth?

I find it useful to point out here that if we all spend our salaries on consumption goods only each month, we would not be able to buy any capital goods such as a house or a car, unless we are paid each month a net equivalent to buy a house or a car. Clearly, only a handful of football players and bankers are in a position to do this. No savings would be made if this policy was ever recommended which, in the medium term, would lead to large scale impoverishment of society. From savings, you have the wellspring of investment to produce the new goods and services of the future.

The massive build up of liquidity has come about as the economy has gone into recession. Governments around the world have reacted by putting newly minted money into the economy.

Why did the boom turn into bust? I would always argue that it was the prior large scale expansion of liquidity that led to excessive credit creation under Gordon Brown’s Chancellorship and indeed his Prime Ministry. From 1997 to today, we have seen an increase in money supply (as measured by M4) from £700 billion to £2 trillion.

The bust happened because the structure of production had become so distorted that the production sector was producing goods that the consumer did not want and/or could not afford to buy. How could this collectively happen? For some help with the answers to this, I turn to Hayek which I summarise. I funded the publication of Prices and Production and Other Works, which prints Hayek’s works written during his time at the LSE.

Capital Theory, the Structure of Production and Boom and Bust

From 1931-50, F A Hayek, the 1974 Nobel Price winner in Economics worked out the following in summary and was awarded the Prize for this work;

In summary, any change in the money supply, through giving new loans to entrepreneurs or to consumers, first lengthens the production structure, then shortens it as real consumer needs have not changed.

Our problem arises from the prior elongation of the structure of production unbacked by real savings, brought about in particular via the low interest rate policy of Gordon Brown’s Government post 2000. This was enhanced by the massive and unprecedented increase in the money supply under his Chancellorship.  That caused more investment in the heavy stages of production: the building of houses, or car factories, or to produce consumer goods that indeed, when push came to shove, not enough people could afford. The correction is now taking place. This is when entrepreneurs rebalance or redirect the factors of production that they have under their command to focus on the actual needs and demands of their customers.

There is no Liquidity Trap (I doubt that this is even a meaningful concept), just a badly misallocated structure of production which, despite the government, is in fact slowly but surely fixing itself.