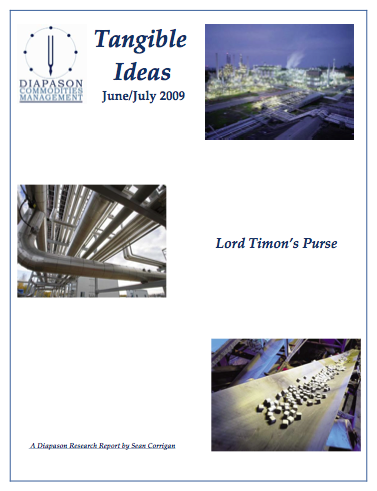 In Lord Timon’s Purse, Sean Corrigan explores the causes of the forty US banking failures of 2009 and sets out some of the basics of money and bank credit.

Despite the US seeing its fortieth banking failure of the calendar year – the greatest number in sixteen years ‐ financial markets are managing their usual feat of deluding themselves that a Goldilocks outcome is in prospect.

News articles abound in sighting of what, in the tiresome horticultural parlance, are invariably referred to as ‘green shoots’; a back up in bond yields is rationalized away as a ‘re‐normalization’ from crazily‐depressed levels (a view with which we actually have some sympathy); rising commodity prices are not to be feared, being merely the expression of an understandable eagerness to indulge in ‘recovery’ plays; slack labour markets and the widespread under‐utilization of capacity is seen to allow central banks to maintain their current accommodative stance for many months to come and – mindful of the ‘mistakes’ made in 1937 – when the unwinding process finally arrives, it will be well‐signalled and gentle.

So, ‘Out of the eater came forth meat; out of the strong came forth sweetness’ and out of banking weakness comes forth equity delight – or so the Street desperately hopes.

Away from the sales pitches and book‐talking, opinion is still, as ever, divided over the outlook for prices. The old war of words is being rehashed between those who see a long, gloomy stretch of near‐deflation as the outcome and those beginning to fret over a resurgence of inflation almost as soon as the real economy regains some traction.

Inevitably, this polemic has degenerated into yet another battle pitting Gold Bugs against New Dealers and Dollar Permabears vs. card‐carrying Keynesians – a Prosperian dialogue light on intellectual substance and generally lacking in insight.

Sean revisits some of the basics (emphasis mine):

On such observations as these [on bank lending and bond issuance] rests the case of those Deflationists who do at least possess sufficient sophistication not to regard a mere drop in the CPI index (and one highly influenced by the fall in over‐elevated energy prices, at that) as the Alpha and Omega of the argument. However, these sages then usually make at least one of two further mistakes in their analysis; viz., that they confound Money with Credit and that they then entirely neglect what is fast becoming the primary mechanism by which new money is being introduced to the economy.

In order to dispel the confusion, we must here digress to reprise a few basics.

ʹMoneyʹ‐ for now disregarding the question of its particular composition ‐ is above all the medium of exchange whose other commonly‐cited attributes as a unit of account and a store of value are decidedly derivative, emergent functions, the first of which is not strictly commensurate with current money itself – e.g., SDRs ‐ and the second of which is sadly more often an aspiration rather than a statement of fact.

In order to function as the medium of exchange, money must be widely and unequivocally accepted ‐ indeed, it must be THE most widely accepted ‐ substitute for the specific consumable goods we seek in a typical trade when we surrender a different batch of consumables to our counterparty but have no use for the goods which he, in turn, is offering for sale. The upshot of this is that money is itself a present good, that is, one instantly utilisable in the here and now.

Again, to emphasise the crucial point, money must be thought of as THE present good par excellence (not, incidentally, just a mere representation of such goods) the one for which there is always a ready market: to say otherwise is an existential denial that it is money at all. While this may have been easier to grasp when money actually took the form of a tangible good ‐ whether cowrie shells, cattle, or silver crowns ‐ it is no less the case today when it has largely been robbed of physical expression.

Money, then, is the medium in which we can make final settlement of any transaction, as is recognised by those étatiste legal tender laws which Leviathan wields to force free individuals to use the bastard versions to whose creation it reserves to itself the exclusive right of sanction and from whose creation it thereby intends mischievously to profit.

By contrast, ‘Credit’ is an assignation of the right of command over present goods to another, whether for a fixed or an indeterminate period. Entailed in this alienation is a sacrifice for which we seek recompense by charging a fee ‐ namely, interest.

[NB: contra the mainstream misconception, interest is not the price of money (that can only mean its reciprocal value expressed in the other goods for which it exchanges), but the price of the time which passes while we forego enjoyment of our property]