In a fascinating 28-minute interview, this afternoon, I spoke to Doctor Jörg Guido Hülsmann, a Professor of Economics at the University of Angers, in France and a senior fellow at the Ludwig von Mises Institute, in Auburn, Alabama. 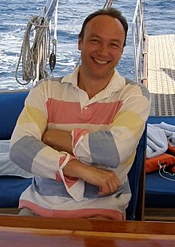 We discussed the Euro, the future of the EU, fractional reserve banking, Ludwig von Mises, and Murray Rothbard, in a wide-ranging debate about the ethical production of money.

The two books mentioned during the programme can be freely downloaded or purchased from the following locations: