JUST HOW MUCH ABUSE can soft money take? Two-thousand-and-eleven sees a big, but so far little-noted ruby anniversary. Expect to hear lots more about it as August 15th draws near.

Because that day will mark 40 years since the United States’ government finally stopped redeeming its dollars for gold. That ended over 250 years of formal “gold backing” for the West’s dominant currencies. It also took the entire world off precious-metal money for the first time in 5,000 years of civilization.

Gold wasn’t being used as money in Aug. ’71, of course. Long banished to central-bank vaults, the ageless metal was represented instead by paper notes – the medium of exchange – in purses, wallets and tills. Nor did gold bullion bars back more than $1 in every four in circulation, gradually slipping from the 40% cover-ratio set during the Great Depression. And unbacked money had also been tried many times in the past as well. Persian kings, Mongol emperors, Scottish chancers in the French court, desperate men at the Reichstag…they all thought they’d found “the secret of the alchemists”, as Marco Polo called China’s paper-note chao in his Travels of the late 13th century – and they all found it disastrous.

But irredeemable money had never been applied worldwide before, and never without some element of “hard money” (meaning gold or silver-backed notes) running alongside. Since US citizens were pretty much barred from owning physical gold, however, removing the metal from inter-government settlement looked a small, inconsequential step to most, especially next to the wage and price controls Richard Nixon also announced in his “Sunday special”. (Tricky was apparently worried about upsetting voters by delaying the latest episode of Bonanza on TV, but he was more anxious still to break the news before markets opened on Monday 16th August.)

Indeed, refusing to redeem foreign governments’ Dollars for US gold bars should have played well to the crowd. Because Nixon was defending the States’ ultimate hoard against those overseas partners who dared to doubt Uncle Sam’s promise to…ummm…redeem his paper dollars for gold. France alone had swapped $250 million for gold in “recent months”, the Financial Times reported on 5th August, helping draw the US gold reserve down to “just over $10,000m, the lowest point since the early 1930s,” as the paper said four days later.

“There has naturually been a revival of the traditional theory that when the gold stock hit $10,000m, the US would simply close the gold window,” the FT explained on 9th August, adding that “There is no evidence that the Nixon Administration plans such action,” even as the Dollar crisis continued to make its front page each day.

Slamming the window shut, just as the “theory” suggested, “We must protect the position of the US Dollar as a pillar of monetary stability around the world,” Nixon told the nation (and the world) on 15 August, 1971. But as his central-bank chairman, Arthur Burns of the Federal Reserve, had feared (“What a tragedy for mankind!” wrote Burns in his diary) the early results soon proved as awful as they were entirely predictable.

Freed from gold’s seemingly arbitrary limits, money bred so fast – everywhere – that wholesale and consumer-price inflation reached untold peace-time levels, crushing savers in both the equity and bond markets pretty much worldwide. Freed from its official peg, in contrast, gold prices rose 20-fold. The public grew so discouraged that, within a decade of Nixon’s decision, his Republican successor, Ronald Reagan, ordered a commission to consider reversing it.

But thanks to those falling bond prices, however – which came thanks to bond buyers everywhere demanding ever-higher interest rates if they were lend money for any period of time to government – Washington got to ignore the Gold Commission’s minority report, and extend the world’s experiment with unbacked money for another 31 years (and counting…).

Because by 1980, and thanks to those soaring bond yields, central bankers had already stumbled upon the solution to unbacked money’s first global crisis…

Hike interest rates so high that cash-on-deposit actually starts paying a positive real return, post-inflation. The effect on gold – and so on any thought of returning to gold-backed money – was signal, as you can see.

Over the first-half of the 1980s, real interest rates – paid over and above inflation – averaged nearly 5% per year. Major-currency savers hadn’t seen anything like it since Great Britain fought to defend (and lost) its own Sterling Gold Standard half-a-century before. And together with those desperate Gold Standard-style interest rates, the Dollar recovered something like a Gold Standard poise.

Peaking at almost 15% in 1980, the pace of US inflation then fell by more than two-thirds in the following half-decade. The Dollar gold price did the same, sliding from its (then) record peak of $850 per ounce to less than $285 five years later.

Why? Mining supplies rose, and the peak prices of 1979 and 1980 unleashed a torrent of scrap-metal supply back to market, too. But negative real rates had forced a growing number of otherwise cautious savers to abandon money for gold throughout the 1970s, just as they have again since 2001. Whereas strongly positive rates, in contrast – and positive like nothing since the scramble for gold of five decades earlier…when global bullion flows determined (and were thus targeted to maintain) international currency values – worked the opposite way. Because no one needs an inflation hedge, a defense against devaluation, when cash-in-the-bank pays 5% more. And that victory was so hard-won, the stability it brought to unbacked money continued even as real rates eased back…pretty much until they neared zero a decade ago.

Here in early 2011, cash savers and central bankers alike stand so far removed from gold-backed currency, let alone from gold-as-money itself, the idea of returning to redeemable notes seems ridiculous. But those killer rates of 1980-85 remain the only sure lesson of how confidence in unbacked money can be won back once it’s begun to dissolve. This month’s gold-price jitters, therefore, are both understandable and absurd. Most sensitive of all assets to a switch in interest-rate sentiment –and so clearly buoyed by the Fed’s repeated promise of “exceptionally low levels…for an extended period” – gold has turned 6% lower on inflation data that points higher, even as Western central banks make plain they’ve no plan of responding, and China holds its real rates some 1.5% below zero for cash savers.

Soft gold prices without hard-money rates? Not for long, we’d guess…not after faith in unbacked money has begun to dissolve. But the feint of 1975-76, however, might say otherwise. 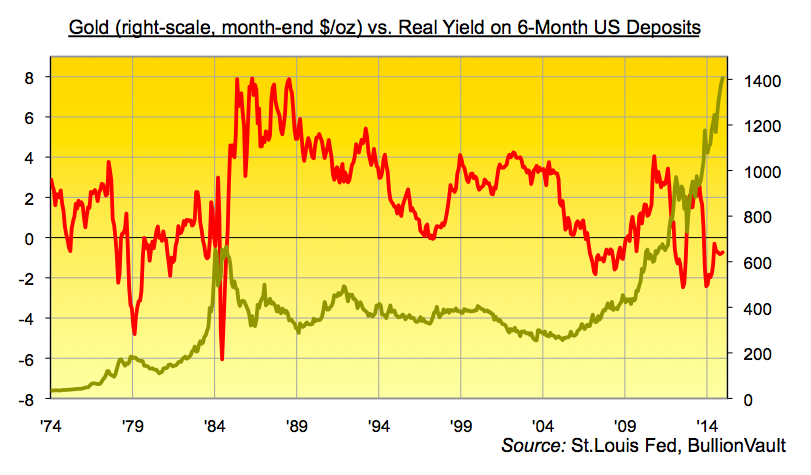 Yesterday evening, James Tyler and I spent a pleasurable time speaking to, answering questions from, and then socialising with, students at Warwick University. It…