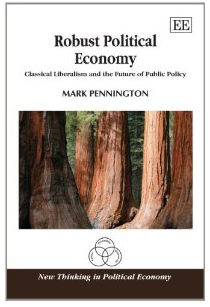 This important book offers a comprehensive defence of classical liberalism against contemporary challenges. It sets out an analytical framework of ‘robust political economy’ that explores the economic and political problems that arise from the phenomena of imperfect knowledge and imperfect incentives.

Using this framework, the book defends the classical liberal focus on markets and the minimal state from the critiques presented by ‘market failure’ economics and communitarian and egalitarian variants of political theory. Mark Pennington expertly applies the lessons learned from responding to these challenges in the context of contemporary discussions surrounding the welfare state, international development, and environmental protection.

Written in an accessible style, this authoritative book would be useful for both undergraduate and graduate students of political economy and public policy as a standard reference work for classical liberal analysis and a defence of its normative prescriptions. The book’s distinctive approach will ensure that academic practitioners of economics and political science, political theory and public policy will also find its controversial conclusions insightful.