I have just stumbled upon a new translation of Cantillon’s “An Essay on Economic Theory” (Essai sur la Nature du Commerce en Général), rewritten from 18th century French into 21st century English, as translated by Chantal Saucier and edited by Mark Thornton.

In many ways, Cantillon is perhaps the first modern Austrian economist, as Thornton himself noted in an earlier biography; he is certainly an important bridging stone between the Spanish Scholastics and Carl Menger, and his colourful life was a favourite subject of Murray Rothbard.

As a widely-travelled 18th century Irishman, and friend of the Scottish rogue John Law — perhaps the first Keynesian! — Cantillon also reminds me in many ways of my favourite fictional Irishman, Stephen Maturin, as played so splendidly in the movie Master and Commander, by Paul Bettany, but that is by the bye.

Getting back to the topic on hand, you can get hold of a freely-available PDF copy of the Cantillon book, plus the printed version, here:

You can also listen to an interview between Jeff Tucker and Mark Thornton, discussing the book, as below: 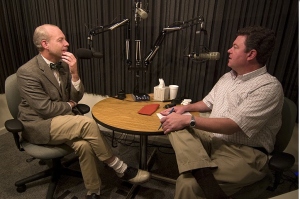 We are pleased to announce a special discount for Cobden Centre readers on The Letters of Richard Cobden from Oxford University Press: In four…