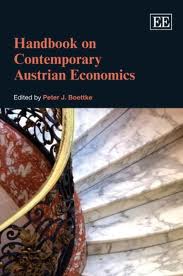 Peter J. Boettke has brought together a collection of young economists to outline the core propositions that make Austrian Economics distinct. The book – “Handbook on Contemporary Austrian Economics” – is an easy read and is perfect for someone with little background in economics, mainstream or Austrian, to gain a quick introduction to the science.

It also has some fodder for those at a higher level wishing to explore and develop further. While reading chapter 8 by J. Robert Subrick I was quickly reminded of why it is that the Austrian focus on non-neutral money is so important. It is, after all, one of the basic points that defines the Austrian theory of the business cycle.

When money is created through a supply-side policy, particularly fiat money with no heed to the profit-loss calculus that defines the supply of any good, its entry disrupts the balance that exists in the economy. This is in part because money serves as the common denominator that defines prices and allows us to compare our choices. It is also because money is that medium of exchange that we transact in and use to settle our debts.

When money enters an economic system, it does so via a particular person or business, and later through transactions spreads to other agents. As it spreads it is spent on goods, placing upward pressure on their prices. Inflation results. This inflation benefits some at the expense of others.

Since money must spread prior to price inflation occurring, the first user of the new money units will be able to purchase goods at the old pre-inflation prices. As this new money is spent, prices continually increase. In this way the first user of the money has greater purchasing power, as his money supply has increased but prices have lagged. The last user of a new money unit has less purchasing power. His supply of money has not increased until the very end yet prices already adjust upward before he receives this increase to his money holdings.

Many mainstream economists make the claim that money is non-neutral in the sense that changing its supply stimulates output. As the first users of money have more purchasing power, they spend the extra cash and this stimulates business and production – at least until prices catch up, but this won’t happen until the future. We thus see a very basic rationale for increasing the money supply during a crisis such as today’s.

Austrian economists also refer to money’s non-neutral property, but they make a much stronger claim. The claim is that money does not alter the amount of goods being produced, but rather the structure that produces those goods. As fresh money enters the economic system it alters the array of relative prices, making some more attractive for investment than others. As a result, entrepreneurs alter their investment plans, and an economy aligned not with the real demands and savings of its individuals arises, but rather one consistent with injections of new money.

The culmination of this process occurs when entrepreneurs see that the system is not held together by anything real, but rather by monetary manipulations.

Boettke’s edited collection explains this process in depth, as well as other key points defining the Austrian approach to economic science. It even includes a brilliant chapter by the Cobden Centre’s own Anthony Evans about why methodological individualism is important, and what it really means.

You can read my full review here (PDF).

David Howden is Chair of the Department of Business and Economics, and professor of economics at St. Louis University, at its Madrid Campus, Academic Vice President of the Ludwig von Mises Institute of Canada, and winner of the Mises Institute’s Douglas E. French Prize. Send him mail.