In Gold Wars, Swiss banker Ferdinand Lips sets out the case that gold and freedom are inseparable. Over 254 pages, he shows how governments fight against gold, a vital restraint on their spending and therefore interventions in the lives of free people. 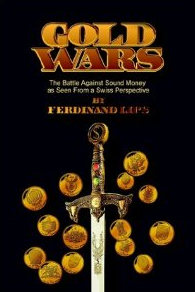 It’s a case which ex-Federal Reserve Chairman Alan Greenspan made in his classic essay, Gold and Economic Freedom, available in Capitalism: The Unknown Ideal. He wrote,

He apparently never repudiated that work.

Lips’ book extends the argument considerably, exploring the reasons why the Bank of England sold so much gold under Gordon Brown and making the case for “the long overdue elimination of the IMF”, referring to the Fund’s “near perfect record of failure”. He describes the EU as “a centralist colossus with absolute and despotic powers.” He writes, “Europe is now undergoing the broadest experiment in planned economics since the decline of the Soviet Union.” And this in 2001.

I have always tended to insist on honest money that holds its value without mentioning “the g word”. For most of the past 5 years that I have been active in politics, “gold ” has been a word certain to end most conversations about economics. Last time I spoke at a dinner, I was berated for not mentioning it. Opinions are changing.

Lips ends his book by explaining that financial markets can only function satisfactorily under a gold standard and that the then contemporary explosion in the money supply was being used to prop up stock markets and save heavily indebted consumers. He said our financial system was in a precarious state but that “Smoothly functioning financial markets with savings channeled into productive investments bring the world economy to its full potential, increasing employment on a worldwide basis.” His vision is one of increasing employment and stable prosperity, one of narrowing global wealth inequality and greater political and social stability.

I am ever more convinced that money is the fulcrum of society. I am convinced that the fundamentally unsound monetary regime of the past century, and particularly since the end of Bretton Woods, has corrupted society economically, morally, culturally and politically. It is that monetary system which has brought us to this crisis and which is now failing at such profound human cost.

I am grateful to The Real Asset Co for making a gift of Lips’ book after our interview. Perhaps a high-quality financial order and a stable economy with sustainable, inclusive prosperity is possible apart from gold as money: this book indicates otherwise.

In light of recent events, we’re bringing forward this proposal from June 2010. There’s two ways to view the financial meltdown that occurred in…