Yes folks, it’s that time of year again; but unlike old Khayyam who reflected bucolically on the continuing availability of wine, we must turn our thoughts to the dangers and opportunities of the coming year. They are considerable and multi-faceted, but instead of being drawn into the futility of making forecasts I will only offer readers the barest of basics and focus on the corruption of currencies. My conclusion is the overwhelming danger is of currency destruction and that gold is central to their downfall.

As we enter 2014 mainstream economists relying on inaccurate statistics, many of which are not even relevant to a true understanding of our economic condition, seem convinced that the crises of recent years are now laid to rest. They swallow the line that unemployment is dropping to six or seven per cent, and that price inflation is subdued; but a deeper examination, unsubtly exposed by the work of John Williams of Shadowstats.com, shows these statistics to be false.

If we objectively assess the state of the labour markets in most welfare-driven economies the truth conforms to a continuing slump; and if we take a realistic view of price increases, including capital assets, price inflation may even be in double figures. The corruption of price inflation statistics in turn makes a mockery of GDP numbers, which realistically adjusted for price inflation are contracting.

This gloomy conclusion should come as no surprise to thoughtful souls in any era. These conditions are the logical outcome of the corruption of currencies. I have no doubt that if in 1920-23 the Weimar Republic used today’s statistical methodology government economists would be peddling the same conclusions as those of today. The error is to believe that expansion of money quantities is a cure-all for economic ills, and ignore the fact that it is actually a tax on the vast majority of people reducing both their earnings and savings.

This is the effect of unsound money, and with this in mind I devised a new monetary statistic in 2013 to quantify the drift away from sound money towards an increasing possibility of monetary collapse. The Fiat Money Quantity (FMQ) is constructed by taking account of all the steps by which gold, as proxy for sound money, has been absorbed over the last 170 years from private ownership by commercial banks and then subsequently by central banks, all rights of gold ownership being replaced by currency notes and deposits. The result for the US dollar, which as the world’s reserve currency is today’s gold’s substitute, is shown in Chart 1. 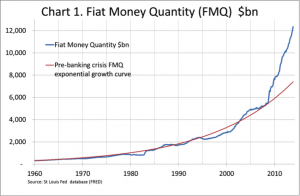 The graphic similarities with expansions of currency quantities in the past that have ultimately resulted in monetary and financial destruction are striking. Since the Lehman crisis the US authorities have embarked on their monetary cure-all to an extraordinary degree. We are being encouraged to think that the Fed saved the world in 2008 by quantitative easing, when the crisis has only been concealed by currency hyper-inflation.

Are we likely to collectively recognise this error and reverse it before it is too late? So long as the primary function of central banks is to preserve the current financial system the answer has to be no. An attempt to reduce the growth rate in the FMQ by minimal tapering has already raised bond market yields considerably, threatening to derail monetary policy objectives. The effect of rising bond yields and term interest rates on the enormous sums of government and private sector debt is bound to increase the risk of bankruptcies at lower rates compared with past credit cycles, starting in the countries where the debt problem is most acute.

With banks naturally reluctant to take on more lending-risk in this environment, rising interest rates and bond yields can be expected to lead to contracting bank credit. Does the Fed stand aside and let nature take its course? Again the answer has to be no. It must accelerate its injections of raw money and grow deposits on its own balance sheet to compensate. The underlying condition that is not generally understood is actually as follows:

The assumption that the Fed is feeding excess money into the economy to stimulate it is incorrect.
Individuals, businesses and banks require increasing quantities of money just to stand still and to avoid a second debt crisis.

I have laid down the theoretical reasons why this is so by showing that welfare-driven economies, fully encumbered by debt, through false employment and price-inflation statistics are concealing a depressive slump. An unbiased and informed analysis of nearly all currency collapses shows that far from being the product of deliberate government policy, they are the result of loss of control over events, or currency inflation beyond their control. I expect this to become more obvious to markets in the coming months.

Gold has become undervalued relative to fiat currencies such as the US dollar, as shown in the chart below, which rebases gold at 100 adjusted for both the increase in above-ground gold stocks and US dollar FMQ since the month before the Lehman Crisis. 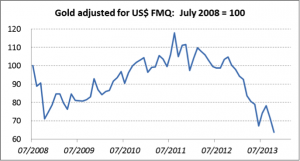 Given the continuation of the statistically-concealed economic slump, plus the increased quantity of dollar-denominated debt, and therefore since the Lehman Crisis a growing probability of a currency collapse, there is a growing case to suggest that gold should be significantly higher in corrected terms today. Instead it stands at a discount of 36%.

This undervaluation is likely to lead to two important consequences. Firstly, when the tide for gold turns it should do so very strongly, with potentially catastrophic results for uncovered paper markets. The last time this happened to my knowledge was in September 1999, when central banks led by the Bank of England and the Fed rescued the London gold market, presumably by making bullion available to distressed banks. The scale of gold’s current undervaluation and the degree to which available monetary gold has been depleted suggests that a similar rescue of the gold market cannot be mounted today.

The second consequence is to my knowledge not yet being considered at all. The speed with which fiat currencies could lose their purchasing power might be considerably more rapid than, say, the collapse of the German mark in 1920-23. The reason this may be so is that once the slide in confidence commences, there is little to slow its pace.

In his treatise “Stabilisation of the Monetary Unit – From the Viewpoint of Monetary Theory” written in January 1923, Ludwig von Mises made clear that “speculators actually provide the strongest support for the position of notes (marks) as money”. He argued that considerable quantities of marks were acquired abroad in the post-war years “precisely because a future rally in the mark’s exchange rate was expected. If these sums had not been attracted abroad they would have necessarily led to an even steeper rise in prices on the domestic market”.

At that time other currencies, particularly the US dollar, were freely exchangeable with gold, so foreign speculators were effectively selling gold to buy marks they believed to be undervalued. Today the situation is radically different, because Western speculators have sold nearly all the gold they own, and if you include the liquidation of gold paper unbacked by physical metal, in a crisis they will be net buyers of gold and sellers of currencies. Therefore it stands to reason that gold is central to a future currency crisis and that when it happens it is likely to be considerably more rapid than the Weimar experience.

I therefore come to two conclusions for 2014: that we are heading towards a second and unexpected financial and currency crisis which can happen at any time, and that the lack of gold ownership in welfare-driven economies is set to accelerate the rate at which a collapse in purchasing power may occur.

Lots of people talk about “The” Quantity Theory of Money and “The” Equation-of-Exchange. The terms have a familiar feel to them, they’re part of…