Editor’s note: We’re grateful to Tim Price of PFP Group for this article. PFP has made this document available for your general information.

“10th March 2000: NASDAQ closes at a record 5048.62, up 24.1% for the year to date — after gaining 86.5% in 1999. A conference on optical fibre stocks sells out nearly every hotel room in Baltimore, the biggest stocks on NASDAQ trade at an average of 120 times earnings, and 15% of NASDAQ’s value is made up of companies less than two years old that have never earned a profit. James J. Cramer, author of the eponymous column “Wrong!” for TheStreet.com, writes that a revival of value stocks “will only happen when the Brocades and Broadcoms blow up. And I don’t see that happening any time soon.” In fact, says Cramer, he’s tempted to short-sell Warren Buffett’s Berkshire Hathaway, betting that the great value investor’s shares are “ripe for the banging.” BancOne fund manager Chris Guinther sums it all up: “In today’s market, it pays to be aggressive.” Today is the absolute peak of the market bubble: In one of the worst crashes in history, NASDAQ plunges 60.6% over the next 12 months. And Cramer’s “Red Hots”? Brocade unravels by 67.1%, Broadcom collapses by 84.1%. Meanwhile, Berkshire Hathaway gains 72.2% over the year to come.”  

– ‘This day in financial history’ on JasonZweig.com.

“The Fed and the other major central banks have been planting time bombs all over the global financial system for years, but especially since their post-crisis money printing spree incepted in the fall of 2008. Now comes a new leader to the Eccles Building who is not only bubble-blind like her two predecessors, but is also apparently bubble-mute. Janet Yellen is pleased to speak of financial bubbles as a “misalignment of asset prices,” and professes not to espy any on the horizon.

“Let’s see. The Russell 2000 is trading at 85X actual earnings and that’s apparently “within normal valuation parameters.” Likewise, the social media stocks are replicating the eyeballs and clicks based valuation madness of Greenspan’s dot-com bubble. But there is nothing to see there, either–not even Twitter at 35X its current run-rate of sales or the $19 billion WhatsApp deal. Given the latter’s lack of revenues, patents and entry barriers to the red hot business of free texting, its key valuation metric reduces to market cap per employee–which computes out to a cool $350 million for each of its 55 payrollers.” – ‘Yellenomics: the folly of free money’ by David Stockman.

Trying to time the markets is either next to impossible, or simply impossible. Either way, we think it’s impossible, so we don’t try. And since we don’t short stocks, the path of least resistance when it comes to equity market investing is

 a) Avoid obvious overvaluation, and
b) Concentrate on apparently dramatic undervaluation.

 If in doubt, the best policy is always to ask ‘What would Ben Graham have done ?’ and then just do that. (And conversely, if Ben Graham would never have done it, then don’t do it either.) And David Stockman isn’t the only person who detects evidence of a bubble in Big ‘Tech’. V. Prem Watsa of Fairfax Financial Holdings points to the highly speculative valuations currently on offer in the ‘social media’ and ‘other tech / web’ space. For example: 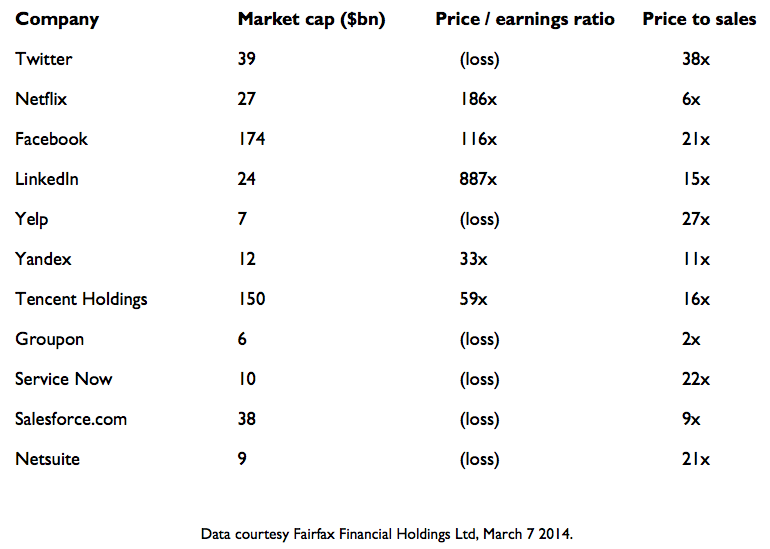 It’s fairly safe to assume that Ben Graham would not have given ownership of these companies at current valuations his uninhibited endorsement. Indeed, as he once said,

So in summary, here are the cardinal errors:

i) Buying rubbish (or speculative nonsense);
ii) Overpaying for quality.

Avoiding the first error is relatively easy, subject to the vagaries of subjective judgment. Avoiding the second, however, may be difficult, perhaps impossibly so, when our monetary overlords at the central banks are hopelessly distorting the price of money. The prudent response, we feel, is to lean that much more heavily on the side of caution by only even considering out-and-out deep value – at least within the context of the listed equity markets. And it is worth repeating Graham and Dodd’s 1934 definition from ‘Security Analysis’:

“An investment operation is one which, upon thorough analysis, promises safety of principal and a satisfactory return. Operations not meeting these requirements are speculative.” [Emphasis ours.]

Quite which operations in today’s marketplace will turn out to be speculative is not yet known to anybody. But the law of gravitation, egged on by the madness of crowds, will doubtless reveal its secrets to us before too long. The ‘social media and other tech / web space’ seems as good a place as any to expect to see investment operations smashed against the rocks before the year is out.

But as we suggest, overpaying for quality may be an inevitable risk in a financial world in which hopes and fears over QE, Zero Interest Rate Policies and banking system solvency (and the threat of depositor bail-ins) dominate more objective fundamentals such as corporate profits growth (or lack thereof). Groupthink alone is sufficient to cause unhealthy dislocations when gravitational forces ensue. We suspect that global megacap consumer brands may now be an unhealthily crowded trade – the sort of investment that makes sense at first glance given the problems highlighted at the beginning of this paragraph, but unhealthily crowded nevertheless. They certainly have been before. Take the ‘nifty fifty’ growth stocks of the early 1970s. Coca-Cola was one such stock. When the forces of recession arrived on the back of the Arab oil embargo, Coke’s stock managed to lose over two thirds of its value. 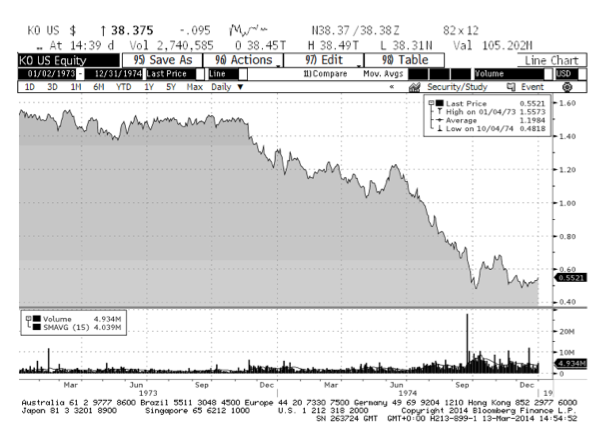 Coke wasn’t alone. Over the same period, Disney also lost over two thirds of its value. Blue-chip IBM survived relatively unscathed: it only lost 57%. Note that this isn’t a prediction for the next   bear phase – but we would suggest that the social media sector, being inherently more flimsy, has that much further to fall.

Where are we currently finding ‘deep value’ ? In pockets of the mid-cap market throughout Asia, notably in Japan, and also, ahem, in Russia, which we note has now replaced gold as the most reviled part of the global asset marketplace. But we also note that gold seems to have turned a corner after its annus horribilis in 2013. As does its kissing cousin, silver. Since we bought both for very specific reasons, and the underlying fundamentals for holding both have if anything only strengthened even as their prices melted last year, we’re unlikely to be selling either any time soon. And of course the miners of each have also seen their share prices recover some, though so far only some, of the ground they lost, but again we’re in the sector for the long haul. We think money printing is in and of itself inflationary. We also think that central banks may soon have to go ‘all-in’ in their fight against deflation. We think they are destined to lose control of the markets before they are ultimately proved wrong in any case, but who knows ? This is what happens when you allow economic policy wonks unfettered power to experiment on complex markets with unproven (and unprovable) models and make-it-up-as-you-go-along monetary policy on the hoof. Since this is destined to end badly, apart from diversifying sensibly into non-equity assets, it makes sense to seek shelter – in equity terms – in those things most worthy of Ben Graham’s affection. Or in the words of Ben Graham’s most celebrated acolyte, Warren Buffett,

“We don’t get paid for activity, just for being right. As to how long we’ll wait, we’ll wait indefinitely.”

For the past four years, bond traders have quickly turned their focus after Federal Reserve meetings to something called the dot plot (seen as…