Economists at the Federal Reserve have devised a new indicator, which they hold will enable US central bank policy makers to get better information regarding the state of the labour market. The metric is labelled as the Labour Market Conditions Index (LMCI).

Note that one of the key data Fed policy makers are paying attention to is the labour market. The state of this market dictates the type of monetary policy that is going to be implemented.

Fed policy makers are of the view that it is the task of the central bank to navigate the economy toward a path of stable self-sustaining economic growth.

One of the indicators that is believed could inform policy makers about how far the economy is from this path is the state of the labour market.

A strengthening of the labour market is seen as indicative that the economy may not be far from the desired growth path.

A weakening in the labour market is interpreted as indicating that the distance is widening and the economy’s ability to stand on its own feet is diminishing.

Once the labour market shows strengthening this also raises the likelihood that the Fed will reduce its support to the economy. After all, to provide support whilst the economy is on a path of stable self-sustained growth could push the economy away from this path towards a path of accelerating price inflation, so it is held.

Conversely, a weakening labour market conditions raises the likelihood that the Fed will either maintain or strengthen its loose monetary stance. Failing to do so, it is held, could push the economy onto a path of price deflation and economic crisis.

The LMCI is derived from 19 indicators such as the number of people employed full time and part time, the labour participation rate, the hiring rate, hiring plans etc.

In September the index rose by 2.5 points after gaining 2 points in August. Note however that in April this year the index increased by 7.1 points. Following the logic of Fed policy makers and assuming that they will pay some attention to the LMCI, if the index were to continue strengthening then the Fed may start considering tightening its monetary stance. 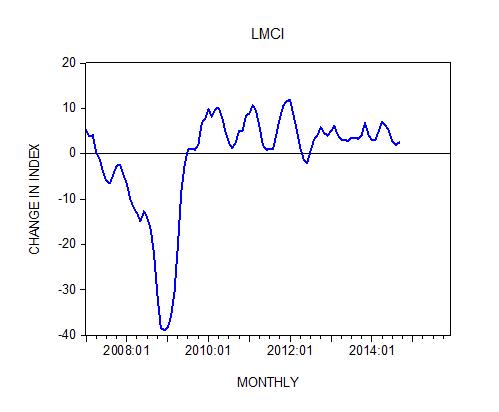 We suggest that the Fed’s responses to the LMCI are not going to bring the economy onto a path of stability and self-sustaining economic growth, but on the contrary will lead to more instability and economic impoverishment.

The state of a particular indicator such as the LMCI cannot tell us the state of the pool of real wealth i.e. whether it is expanding or shrinking.

It is not important to have people employed as such but to have them employed in wealth generating activities. Employment such as digging ditches and building non-wealth generating projects are only depriving wealth generators from the expansion of the pool of real wealth. This undermines the ability to grow the economy and leads to economic misery.

The belief that the Fed can navigate and grow the economy is wishful thinking. All that Fed officials can do is to pump money and tamper with the interest rate structure. None of this however can lead to economic growth.

The key to economic growth is the expansion in capital goods per individual. This expansion however must be done in accordance with the dictates of the free market and not on account of an artificial lowering of interest rates and monetary pumping.

Loose monetary policy will only result in the expansion of capital goods for non-wealth generating projects i.e. capital consumption.

Only by means of the allocation of resources in accordance with the dictates of the market can a wealth generating infrastructure be established. Such infrastructure is going to lead to economic prosperity.

To conclude then, the Fed’s new indicator adds more means for US central bank officials to tamper with the economy, which will lead to greater economic instability and economic impoverishment.

The Fed has introduced a new economic indicator labelled the Labour Market Conditions Index (LMCI). The LMCI is derived from 19 labour market related indicators; hence it is held it is likely to provide a more realistic state of the labour market.

This in turn will enable Fed policy makers to navigate more accurately the economy toward a path of stable non-inflationary economic growth.

This however, the LMCI doesn’t provide. Since Fed officials are likely to react to movements in the LMCI we hold this will only lead to a deepening in the misallocation of resources and to a further weakening of the wealth generation process.

The government’s releases of various economic indicators such as GDP, CPI and unemployment receive wide coverage in the media. In a measured and…