“There are two ways of learning how to ride a fractious horse; one is to get on him and learn by actual practice how each motion and trick may be best met; the other is to sit on a fence and watch the beast a while, and then retire to the house and at leisure figure out the best way of overcoming his jumps and kicks. The latter system is the safest; but the former, on the whole, turns out the larger proportion of good riders. It is very much the same in learning to ride a flying machine; if you are looking for perfect safety, you will do well to sit on a fence and watch the birds, but if you really wish to learn, you must mount a machine and become acquainted with its tricks by actual trial.”

“So, too, for the stock market. It is easy to study stock tables in solitude from the comfort of your office and declare the market efficient. Or you can be a full-time investor for a number of years and, if your eyes are open, learn that it is not. As with the Wrights, the burden of proof is somehow made to fall on the practitioner to demonstrate that he or she has accomplished something the so-called experts said could not be done (and even he may find himself explained away as aberrational). Almost none of the burden seems to fall on the armchair academics, who cling to their theories even in the face of strong evidence that they are wrong.”

Days of miracle and wonder in the bond markets.. but not necessarily in any good way. Last week we highlighted the seeming anomaly that even as there has never been so much debt in the history of the world, it has also never been so expensive. Between 2000 and 2013, the value of outstanding tradeable debt rose from $33 trillion to $100 trillion, according to research from Incrementum AG. (Over the same period, total equity market capitalisation rose “merely” from $49 trillion to $66 trillion.) Although we would suggest there is now no semblance of traditional value in conventional government debt whatsoever, it could yet get more expensive still.

Albert Edwards of SocGen deserves some credit for maintaining his ‘Ice Age’ thesis over a sustained period of widespread scepticism from other market participants. He summarises it as follows:

“First, that the West would drift ever closer to outright deflation, following Japan’s template a decade earlier. And second, financial markets would adjust in the same way as in Japan. Government bonds would re-rate in absolute and relative terms compared to equities, which would also de-rate in absolute terms..

“Another associated element of the Ice Age we also saw in Japan is that with each cyclical upturn, equity investors have assumed with child-like innocence that central banks have somehow ‘fixed’ the problem and we were back in a self-sustaining recovery. These hopes would only be crushed as the next cyclical downturn took inflation, bond yields and equity valuations to new destructive lows. In the Ice Age, hope is the biggest enemy..

“Investors are beginning to see how impotent the Fed and ECB’s efforts are to prevent deflation. And as the scales lift from their eyes, equity, credit and other risk assets trading at extraordinarily high valuations will take their next Ice Age stride towards the final denouement.”

It is certainly staggering that even after expanding its balance sheet by $3.5 trillion, the Fed has been unable to trigger visible price inflation in anything other than financial assets. One dreads to contemplate the scale of the altogether less visible private sector deleveraging that has cancelled it out. One notes that while bonds are behaving precisely in line with the Ice Age thesis, stock markets – by and large – are not quite following the plot. But there were signs last week that they may finally have got a copy of the script.

The tragedy of our times, unfolding slowly but surely via ever-lower bond yields, is that there is a vacuum at the heart of the political process where bold action – not least to grasp the debt nettle – should reside. Since nature abhors the vacuum, central bankers have filled it. They say that to a man with a hammer, everything looks like a nail. To a central banker facing the prospect of outright deflation, the answer to everything is the printing of ex nihilo money and the manipulation of financial asset prices. The by-product of these malign trends is that it makes rational investment and asset allocation, indeed more narrowly the pursuit of real capital preservation, impossible.

Since the integrity of the debt (and currency) markets is clearly at risk, we have long sought alternatives that offer much diminished credit and counterparty risk. The time-honoured alternative has been gold. As the chart below (via Nick Laird) shows, between 2000 and 2011, gold 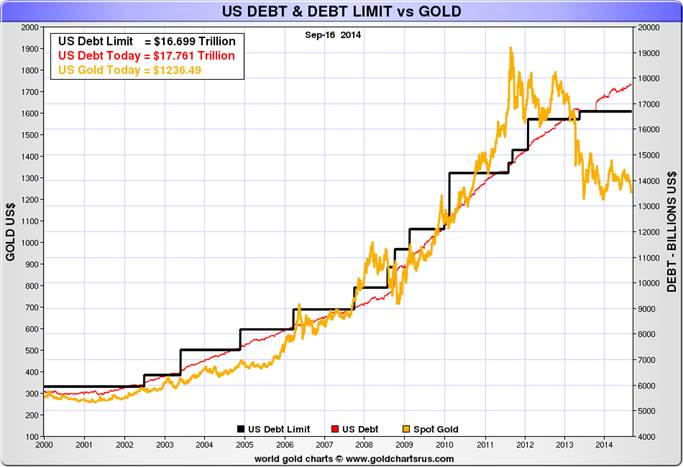 tracked the expansion in US debt pretty handily. In 2008 and then in 2011/2012 gold became overextended relative to US debt. Beginning in 2013 gold then decoupled in the opposite direction. As things stand today, if one expects that relationship to resume – and we do – then gold looks anomalously cheap relative to the gross level of US debt, which clearly is not going to contract any time soon.

A second rationale for holding gold takes into account the balance sheet expansion of the broader universe of central banks: 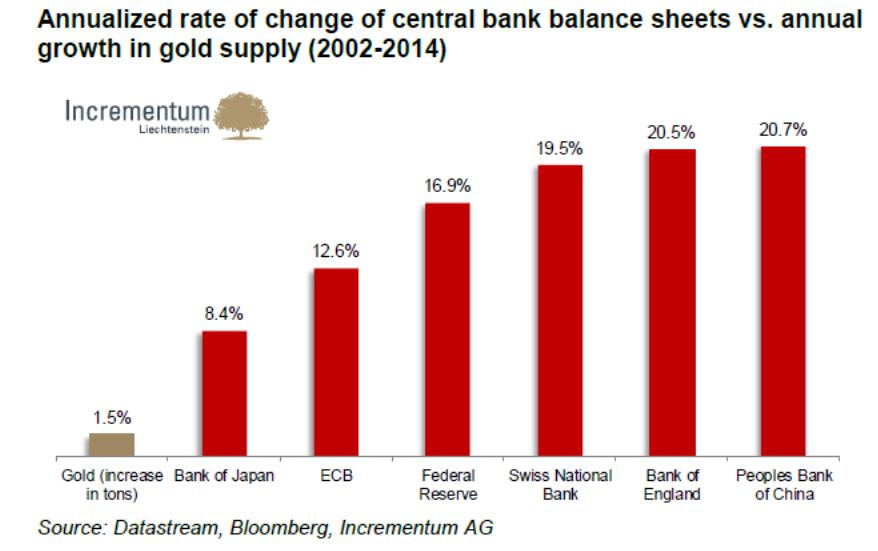 If one accepts that gold is not merely an industrial commodity but an alternative form of money (and central banks clearly do, or they would not be holding it in the form of reserves), than it clearly makes sense to favour a money whose supply is growing at 1.5% per annum over monies whose supply is growing at between 8% and 20% per annum. It then merely comes down to biding one’s time and waiting for Albert Edwards’ “final denouement” (or simply the next phase of the global financial crisis that never really went away).

Two recent tweets from George Cooper on the topic of bond investing are also worthy of republication here:

“The combination of indexing / rating agencies and syndication means that collectively the investment industry does not provide effective discipline to borrowers.”

This is a clear example of market failure brought about by institutional fund managers and the consultants that “guide” their institutional investor clients. There is simply no punishment for ill-disciplined government borrowers (i.e., all of them). To put it another way, where have the bond vigilantes gone ? And,

“The best thing the ECB could do here is state clearly that it has reached the limit of monetary policy and the rest is up to politicians.”

It is not as if politicians asleep at the wheel have gone entirely unnoticed. Two high-profile reports have been published this year drawing attention to the debt problems gnawing away at the economic vitality of the West. Perhaps the most damning response to date has come from the euro zone’s pre-eminent political cynic, Jean-Claude Juncker:

“We all know what to do, we just don’t know how to get re-elected after we’ve done it.”

No discussion of the bond market could possibly be complete without a brief mention of the defenestration of the so-called ‘Bond King’, Bill Gross, from Pimco. For the benefit of anyone living under a rock these past weeks, the manager of the world’s largest bond fund jumped ship before he could be shoved overboard. Pimco’s owners, Allianz, must surely regret having allowed so much power to be centralised in the form of one single ‘star’ manager. In a messy transfer that nobody came out of well, Janus Capital announced that Bill Gross would be joining to run a start-up bond fund, before he had even announced his resignation from Pimco (but then Janus was a two-faced god). This was deliriously tacky behaviour from within a normally staid backwater of the financial markets. Some financial media reported this as a ‘David vs Goliath’ story; in reality it is anything but. The story can be more accurately summarised as ‘Bond fund manager leaves gigantic asset gatherer for other gigantic asset gatherer’ (Janus Capital’s $178 billion in client capital being hardly small potatoes). This is barely about asset management in the truest, aspirational sense of the phrase. This writer recalls the giddy marketing of a particularly new economy-oriented growth vehicle called the ‘Janus Twenty’ fund in the UK back in 2000. Between March 2000 and September 2001, that particular growth vehicle lost 63% of its value. Faddish opportunism is clearly still alive and well. This gross behaviour may mark a market top for bonds, but probably not. But it’s difficult to shake off the suspicion that navigating the bond markets profitably over the coming months will require almost supernatural powers in second-guessing both central banks and one’s peers – especially if doing so on an indexed basis. For what it’s worth this is a game we won’t even bother playing. Our pursuit of the rational alternative – compelling deep value in equity markets – continues.

One reply on “Market failure”