“Sir, The next financial apocalypse is imminent. I know this to be true because the House & Home section in FT Weekend is now assuming the epic proportions last seen before the great crash. Twenty-four pages chock full of adverts for mansions and wicker tea-trays for $1,000. You’re all mad.

Sell everything and run for your lives.”

“Investors unfortunately face enormous pressure—both real pressure from their anxious clients and their consultants and imagined pressure emanating from their own adrenaline, ego and fear—to deliver strong near-term results. Even though this pressure greatly distracts investors from a long-term orientation and may, in fact, be anathema to good long-term performance, there is no easy way to reduce it. Human nature involves the extremes of investor emotion—both greed and fear—in the moment; it is hard for most people to overcome and act in opposition to their emotions. Also, most investors tend to project near-term trends—both favourable and adverse—indefinitely into the future. Ironically, it is this very short-term pressure to produce—this gun to the head of everyone—that encourages excessive risk taking which manifests itself in several ways: a fully invested posture at all times; for many, the use of significant and even extreme leverage; and a market-centric orientation that makes it difficult to stand apart from the crowd and take a long-term perspective.”

“At first, the pendulum was swinging towards infinite interest, threatening the dollar with hyperinflation. Right now the pendulum is swinging to the other extreme, to zero interest, spelling hyper-deflation. This is just as damaging to producers as the swing towards infinite interest was in the early 1980’s. It is impossible to predict whether one or the other extreme in the swinging of the wrecking ball will bring about the world economy’s collapse. Hyperinflation and hyper-deflation are just two different forms of the same phenomenon: credit collapse. Arguing which of the two forms will dominate is futile: it blurs the focus of inquiry and frustrates efforts to avoid disaster.”

The commentary will have its next outing on Monday 27th October.

“When sorrows come,” wrote Shakespeare, “they come not single spies, but in battalions.” Jeremy Warner for the Daily Telegraph identifies ten of them. His ‘ten biggest threats to the global economy’ comprise:

Other than making the fair observation that stock markets (for example) are not entirely correlated to economic performance – an observation for which euro zone equity investors must surely be hugely grateful – we offer the following response.

We saw one particularly eye-catching chart last week, via Grant Williams, comparing the leverage ratios of major US financial institutions over recent years (shown below). 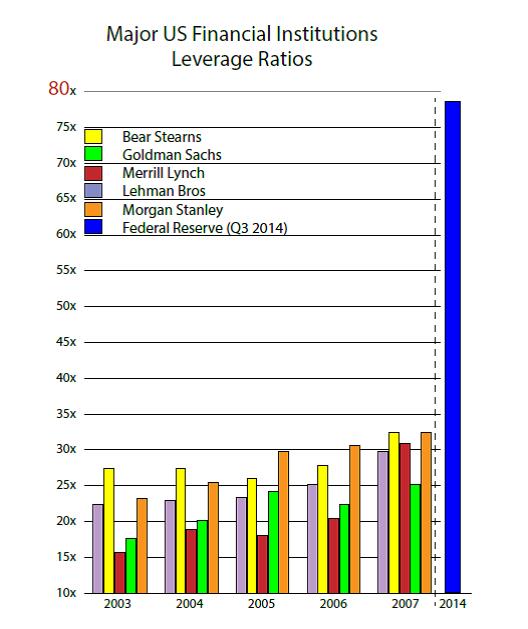 The Fed’s leverage ratio (total assets to capital) now stands at just under 80x. That compares with Lehman Brothers’ leverage ratio, just before it went bankrupt, of just under 30x. Sometimes a picture really does paint a thousand words. And this, again, brings us back to the defining problem of our time, as we see it: too much debt in the system, and simply not enough ideas about how to bring it down – other than through inflationism, and even that doesn’t seem to be working quite yet.

In a recent interview with Jim Grant, Sprott Global questioned the famed interest rate observer about the likely outlook for bonds:

“Well, we have a pretty good historical record of what a bear market in bonds would look like. We had one in modern history, from 1946 to 1981. We had 25 years’ worth of persistently – if not steadily – rising interest rates, and falling bond prices. It began with only around a quarter of a percent on long-dates US Treasuries, and ended with about 15% on long-dated US Treasuries. That’s one historical beacon. I think that the difference today might be that the movement up in yield, and down in price, might be more violent than it was during the first ten years of the bear market beginning in about 1946. Then, it took about ten years for yields to advance even 100 basis points, if I remember correctly. One difference today is the nature of the bond market. It is increasingly illiquid and it is a market in which investors – many investors – have the right to enter a sales ticket, and to expect their money within a day. So I’m not sure what a bear market would look like, but I think that it would be characterized at first by a lot of people rushing through a very narrow gate. I think problems with illiquidity would surface in the corporate debt markets. One of the unintended consequences of the financial reforms that followed the sorrows of 2007 to 2009 is that dealers who used to hold a lot of corporate debt in inventories no longer do so. If interest rates began to rise and people wanted out, I think that the corporate debt market would encounter a lot of ‘air pockets’ and a lot of very discontinuous action to the downside.”

We like that phrase “a lot of very discontinuous action to the downside”. Grant was also asked if it was possible for the Fed to lose control of the bond market:

“Absolutely, it could. The Fed does not control events for the most part. Events certainly will end up controlling the Fed. To answer your question – yeah. I think the Fed can and will lose control of the bond market.”

As we have written on innumerable prior occasions, we wholeheartedly agree. Geopolitics, energy prices, demographics – all interesting ‘what if’ parlour games. But what will drive pretty much all asset markets over the near, medium and longer term is almost entirely down to how credit markets behave. The fundamentals, clearly, are utterly shocking. The implications for investors are, in our view, clear. And as a wise investor once observed, if you’re going to panic, panic early.

Walter W. Heller was said to have been an “educator of Presidents.” As an economist and Presidential advisor in the inner circles of DC,…