In 1985, Arnold Schwarzenegger played John Matrix in the action movie, Commando. One line stands out. While dangling a bad guy over the edge of a cliff Matrix said, “Remember, Sully, when I promised to kill you last?” The frantic man replied, and Matrix added, “I lied.” He let Sully go.

Thomas Jordan, Chairman of the Governing Board of the Swiss National Bank (SNB), must be channeling John Matrix. On December 18, 2014 Jordan said, “The SNB remains committed to purchasing unlimited quantities of foreign currency to enforce the minimum exchange rate with the utmost determination.” Last Thursday, not even a month later—he said, “The Swiss National Bank (SNB) has decided to discontinue the minimum exchange rate…”

Schwarzenegger said it better. Besides, Commando was just a work of fiction. Central bankers toy with people’s livelihoods. Several currency brokers have already failed, only one day after this reversal.

When a central bank attempts to peg its currency, it’s usually trying to stave off collapse. The bank must sell its foreign reserves—typically dollars—to buy its own currency. Recently, the Central Bank of Russia tried this with the ruble. It never lasts long. The market can see the dwindling dollar reserves, and pounces when the bank is vulnerable.

The SNB attempted the opposite, selling its own currency to buy euros. It faced no particular limit on how many francs it could sell. Despite that, the market kept testing its willpower. Here is a graph showing the price of the euro in Switzerland. The SNB’s former line in the sand, is drawn in red, a euro price of 1.2 francs. 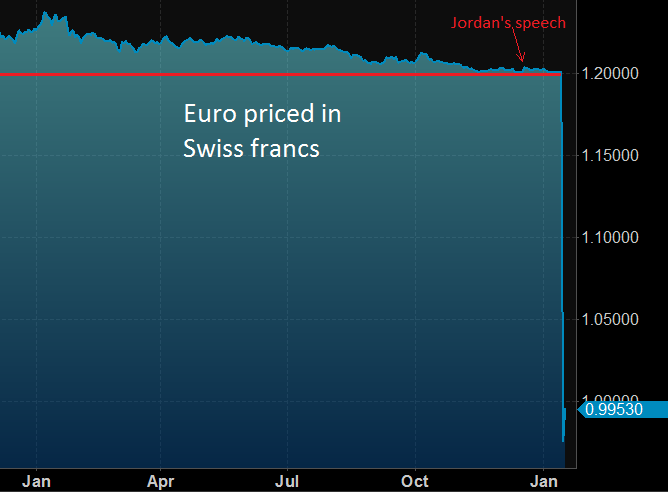 The price of the euro was falling the whole year. Jordan’s promise caused but a blip. The pressure must have been intense. So he tried one last trick, familiar to any gambler.

He said the SNB is committed and tossed around words like unlimited. The market saw his bet, and raised. That forced him to fold.

I wrote about why the SNB pegged the franc. It wasn’t about exporters, but commercial banks. They borrow francs from their depositors, but lend many euros outside Switzerland. This means they have franc liabilities mismatched with euro assets. When the euro falls, they take losses.

The SNB inflicted this same problem on itself with its intervention. It borrowed in francs, creating a franc liability. This borrowing funded its purchase of euros, which are its asset.

As of November, its balance sheet showed 462 billion francs worth of foreign currencies, and it has disclosed that euros represent just under 50% of that. This puts their euro assets around 230B francs (which probably increased after that). The euro has fallen from 1.2 francs to just under 1.0, or 17%.

On Thursday, the SNB lost at least 38B francs, or 6 percent of Swiss GDP.

Why on earth did it choose to take this loss? It threw the commercial banks under the bus, and got tire tracks on its own back too. Without being privy to its internal discussions, we can make an educated guess.

The SNB hit its stop loss.

As traders kept buying francs, the SNB was obliged to keep increasing its bet. Its exposure to euro losses was growing. To continue meant more euro exposure on the same capital base—rising leverage. It chose to realize a big loss now, rather than continue marching towards insolvency.

The market is much bigger than the Swiss National Bank. If the citizens of insolvent states like Greece want to sell their euros for francs to deposit in Swiss banks, and if hedge funds and currency traders want to bet on the franc then the SNB can’t stop that freight train.

Everyone who holds francs is happy, because the franc went up. However, the fallout has just begun. Franc holders will discover that they are creditors. They can’t rejoice for long at their debtors’ pain. Pain will one day morph into defaults. Soon enough the franc will abruptly reverse. Who will bid on a defaulted bond, or a currency backed by it?

The game of floating paper currencies is not zero-sum, but negative-sum. Every move destroys someone’s capital. On Thursday, the SNB admitted it lost 38B francs. How much did commercial banks, pension funds, and other debtors in Switzerland lose in addition?

It seems that every generation or two, fundamental economic ideas are questioned and challenged. The reasonable and important idea that governments should balance their…