This year has seen some big losses develop in the bond markets, though prices have stabilised in recent days. 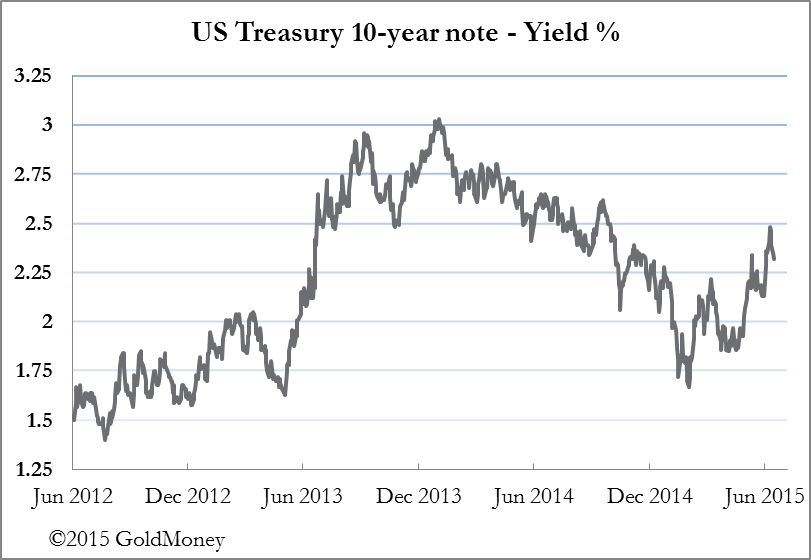 The chart above is of the yield on the lowest investment risk in ten year maturities. Most other 10-year bonds have seen even sharper rises in yield (i.e. greater price falls). This matters because the banking system is heavily invested in sovereign bonds, not only in the short end of the market where it traditionally invests its liquidity, but also in longer maturities between five and ten years. Furthermore, central banks have become exposed to the same risk through their bond purchases with implications for currency stability, but that is a separate issue.

The primary reason for today’s excessive duration mismatch between short-term deposits and bonds of longer maturities is zero interest rates. Banks simply cannot make reasonable returns by buying shorter maturities, and they are encouraged by banking regulations to pick up a little more yield by buying longer-dated government bonds instead of lending money to customers who are categorised as riskier. The result is banks have suffered substantial losses in recent months, most of which have been in the current quarter.

The table below summarises the losses seen in the larger sovereign bond markets at the worst point last week, and it is noticeable how badly Eurozone government bonds were hit.

This is a separate but related issue from Greece, which is worrying enough in its own right, because the write-offs at the ECB from a Greek default will exceed the ECB’s shareholders’ capital.

It is worth bearing in mind that Eurozone banks are closely tied in with their national governments, and are expected to take the lead in funding them. Furthermore, Basel Committee regulations make this easier by treating sovereign bonds as preferred investments. So imagine the losses faced by the average Italian or Spanish bank, when their national bonds fell by these amounts in the space of six weeks, particularly when their bond holdings exceed their tangible shareholders’ funds by a multiple factor. Even German banks were badly hit, not to mention the French and Eurozone banks in other countries not listed in the table. Unless the current recovery in bond prices holds by the end of this month, these banks could be forced to record systemically destabilising losses at the quarter end.

This is not all. The general assumption has been that in the absence of price inflation central banks are in control of bond markets, so these losses were not meant to happen. Instead it is becoming apparent they have become trapped by their own monetary policies, with no remedial action that will not destabilise markets. Furthermore, as I pointed out recently, with inflation being under-recorded in official statistics bond prices were and still are far too high, so further falls can be expected.

The markets are telling us that the bond bubble may be in the early stages of imploding. We can take the general media silence on this issue as evidence that investors were caught unaware, but central banks should be alert to the dangers. Recent talk about normalising interest rates has been inspired by a need to control valuation excesses, which should now be replaced by attempts to prop up bond prices; so talk of the Fed raising interest rates should now fade. And while Chairman Yellen in yesterday’s FOMC* statement could not admit this, she effectively confirmed it by sitting firmly on the fence.

History tells us two related facts. Central banks are always defeated by markets in the end, and central bankers have a touching faith that next time they will retain control over markets. But if we accept the lessons of history, we must dismiss complacency over systemic risk to the financial system. We can go even further, and begin to expect that of all the risks that will eventually trigger a widely expected financial crisis, it will be an old-fashioned bear market in bonds.