In May the US unemployment rate stood at 5.5% against the rate of 5.3% for the natural unemployment also known as the Non-Accelerating Inflation Rate of Unemployment (NAIRU).

According to the popular view once the actual unemployment rate falls to below the NAIRU, or the natural unemployment rate, the rate of inflation tends to accelerate and economic activity becomes overheated. (This acceleration in the rate of inflation takes place through increases in the demand for goods and services. It also lifts the demand for workers and puts pressure on wages, reinforcing the growth in inflation).

On this way of thinking the central bank must step in and lift interest rates to prevent the rate of inflation from getting out of control. 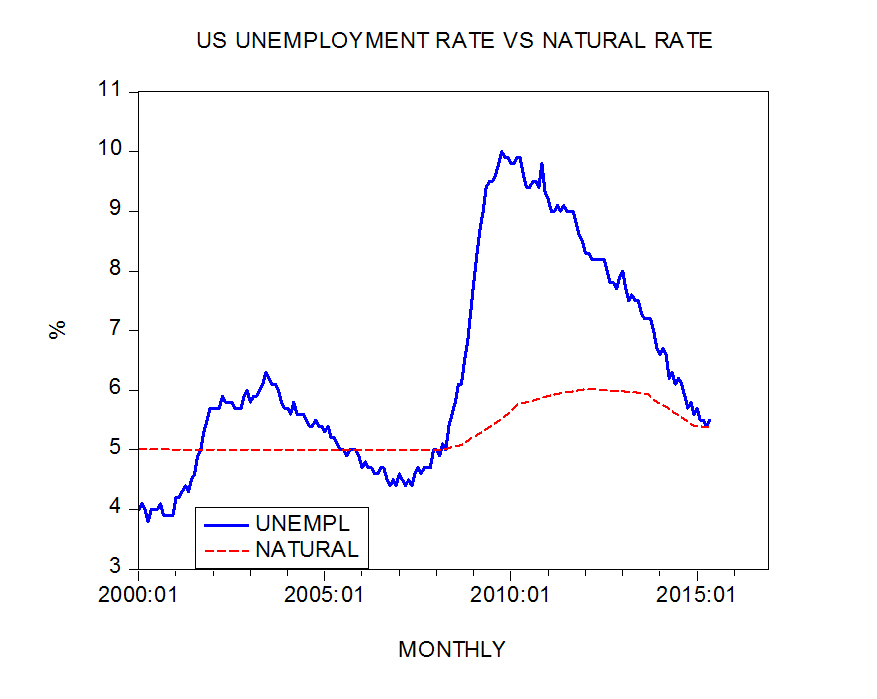 Recently however, some experts have raised the possibility that the natural unemployment rate is likely to be much lower than the government official estimate of 5.3%. In fact it is argued that the natural unemployment rate since October last year has fallen to 4.3% – (Daniel Aaronson & Arian Seifoddini – The Federal Reserve Bank of Chicago – Chicago Fed Letter 2015 Number 338).

The reasons for this decline are demographic changes and an increase in the level of education. (The natural unemployment rate tends to fall, so it is held, with the rising age of the labour force and with its education).

Experts are of the view that these factors should continue to lower the natural unemployment rate for at least the remainder of the decade.

It is held that a lower natural rate may help explain why wage inflation and price inflation remain low, despite the actual unemployment rate recently reaching 5.5%.

A lower natural rate of unemployment on this way of thinking suggests the Fed can keep interest rates lower for longer without worrying about lifting the rate of inflation.

Why NAIRU is an arbitrary measure

This way of thinking doesn’t consider whether a theory corresponds to reality. Here we have a framework, which implies that “anything goes” as long as one can make accurate predictions.

The purpose of a theory however is to present the facts of reality in a simplified form – a theory has to originate from reality and not from some arbitrary idea that is based on a statistical correlation.

If “anything goes” then we could find by means of statistical methods all sorts of formulas that could serve as forecasting devices.

Therefore we could easily conclude that in order to exercise control over the rate of inflation the central bank must carefully watch and control the rate of increases in Mr Jones’ income. The absurdity of this example matches that of the NAIRU framework.

Contrary to mainstream thinking, strong economic activity as such doesn’t cause a general rise in the prices of goods and services and economic overheating labeled as inflation.

Regardless of the rate of unemployment, as long as every increase in expenditure is supported by production no overheating can occur.

The overheating emerges once expenditure is rising without the backup of production – for instance when the money stock is increasing. Once money increases it generates an exchange of nothing for something, or consumption without preceding production, which leads to the erosion of real wealth.

Prices are another name for the amount of money that people spend on goods they buy.

Conversely, if the stock of money remains unchanged it is not possible to spend more on all the goods and services; hence no general rise in prices is possible.

By the same logic, in a growing economy with a growing amount of goods and an unchanged money stock, prices will fall.

On July 11, 2019 before the Senate Banking Committee, the Federal Reserve Board Chairman Jerome Powell said that the relationship between unemployment and…