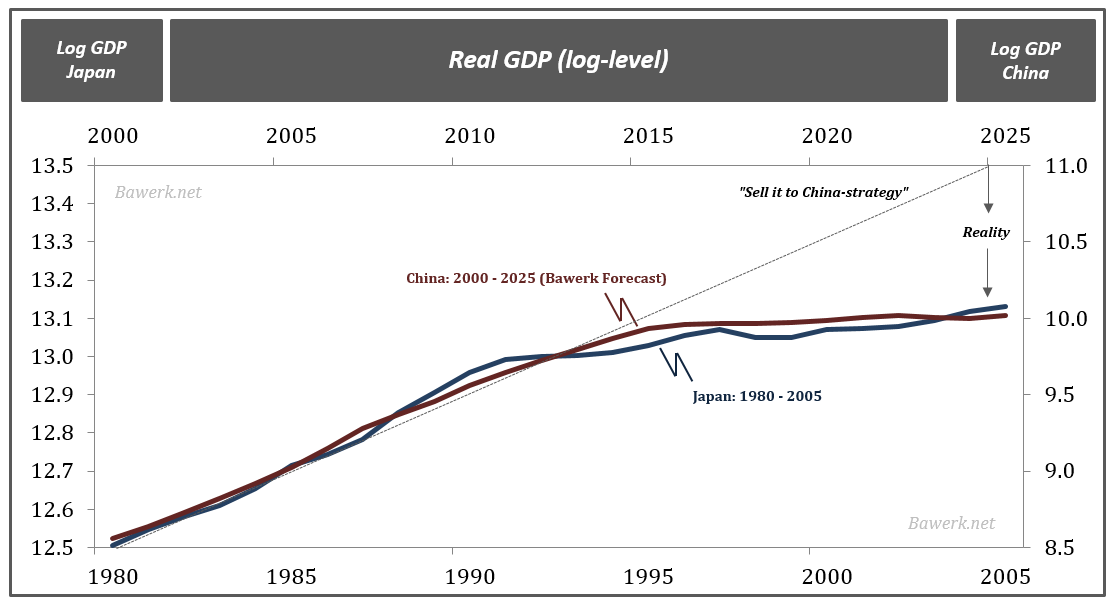 The Chinese Jīngjì qíjī, wirtschaftswunder, keizai no kiseki, milagro económico or whatever you want to call is neither a miracle nor distinctly Chinese. A basket case like Argentine managed to pull off a similar feat, albeit with more volatility, over a 42 year timespan beginning in 1870. Germany did even better between 1945 and 1970. And Japan had its own miracle from 1950 to 1990.

Giving the Beijing consensus, whatever that may be, credit for creating an unprecedented economic miracle is naïve and have led pundits all over the world to make disastrously optimistic forecasts for what the future will bring.  Commodity producers as far away as Latin America, Africa and Australia have poured money into capacity expansions with a very simple strategy; can’t sell it? Dump it in China, they’ll take it. We have seen this, admittedly expressed more eloquently, first hand. 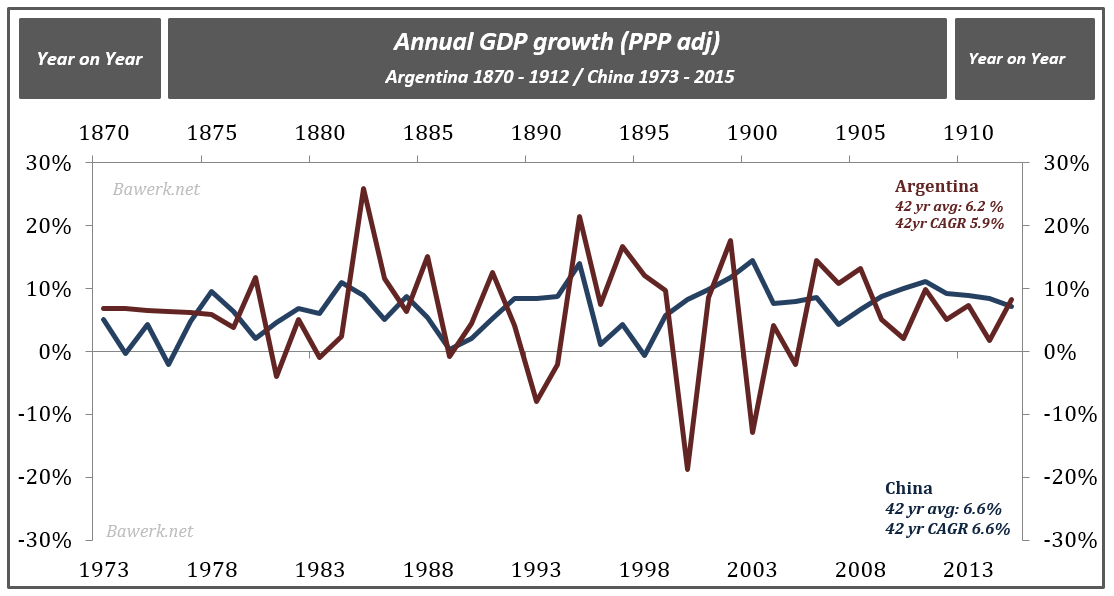 China is several countries centrally governed by a ruthless power elite with vested interest in maintaining the status quo. To expand their own power, wealth and status all they had to do was open up their borders to foreign capital and supplying it with slave labour. It is not very difficult, even a communist can figure it out. However, as the economy evolved it needed investments in infrastructure which was easily funded by stealing workers savings (financial repression on a scale the Yellen’s and Draghi’s of the world can only dream off) and funnelling it into state owned enterprises with lucrative government contracts. They didn’t even have to pay lip service to property rights as all property was and still is held by the state. In short, this stage of economic development involves resource allocation from the centre. As Michael Pettis argues in The Four Stages of Chinese Growth centralised capital allocation gets a tremendous support from the rent-seeking elite and are thus easy to implement.

There are obviously limits to this kind of growth and China’s exponentially increasing debt load suggest they have more or less exhausted the easy route toward “progress”. The next stage, based on social capital accumulation, efficient (individualised) capital allocation, limited political and elite interference and human ingenuity and creativity, all tied together into an objective, law-abiding incentive structure is an impossible task for the current political structure. Making the leap usually fails, despite all the talk off the effectiveness stemming from centralised dictatorship, the only true source of economic growth comes from the individual.

We have seen it before, several times. It is exceedingly hard to manage the transition from a top-down economy based on foreign demand to one that grows organically from the individual level. It usually ends in a massive bust, before moving forward at a third of the speed experienced prior to the crisis. How the aftermath of the coming crisis  plays out depends on how the elite reacts. Accept the inevitable, let the system reset and loosen the iron grip or desperately try to cling on to old ideas and power structures by bailing out every undeserving crony. In the first case the crisis is deep, but short lived. In the second it’s shallow, but everlasting.

Note that “Great Moderations” are the very antithesis to social systems. These systems need volatility to prosper. The Soviet Union had only one recession – in 1991

China is probably at T-1 already. With electricity production/consumption, freight volumes and export all confirming a contracting manufacturing sector, substantiated by the PMI index and deflating producer prices the Chinese leadership is faced with a decision which will colour the Chinese economy for decades.

Optimist point to the increased share of services in the Chinese GDP mix as proof positive things are jolly good and no change in course necessary. Even assuming services constituting 50 per cent of total GDP and growing at 7 per cent a year (both highly generous assumptions) a contracting manufacturing sector still leaves overall Chinese GDP at a modest 2 – 3 per cent annual growth; as opposed to the touted 7 per cent propaganda.

As the deflationary excessive capacity kills every chance of ever repaying the mountain of bad debt piling up on the Chinese balance sheet the most tempting thing for the elite do is to double down on failed policies, such more infrastructure investment spending (paid for by the workers toil) and obviously suppress bankruptcies by bailing out failed industries (owned by the elite).

While this will cushion the blow in the short term, it is destined to lower the overall growth for a long time to come. Japan’s clumsy handling of the bust in the 1990s is a perfect example. The European and American response to the GFC are also textbook examples of how not do deal with a crisis.

As China faces it’s most important crossroad since Deng Xiapoing opened up the country we more or less know the path they will take and by extension we know real (as in not the numbers provided by the Ministry of Truth) growth rates will disappoint sell-side analysts for years to come.

But it gets even worse. China also faces a demographic tax that alone are enough to reduce growth rates considerably. The potential labour force is already growing at a slower pace than the overall population and will even shrink from 2017. In 2015 the median age in China was 37 years, and will move steadily upwards, to 39 in 2020 and 41 in 2025. See appendix for details on Chinese population and ageing. 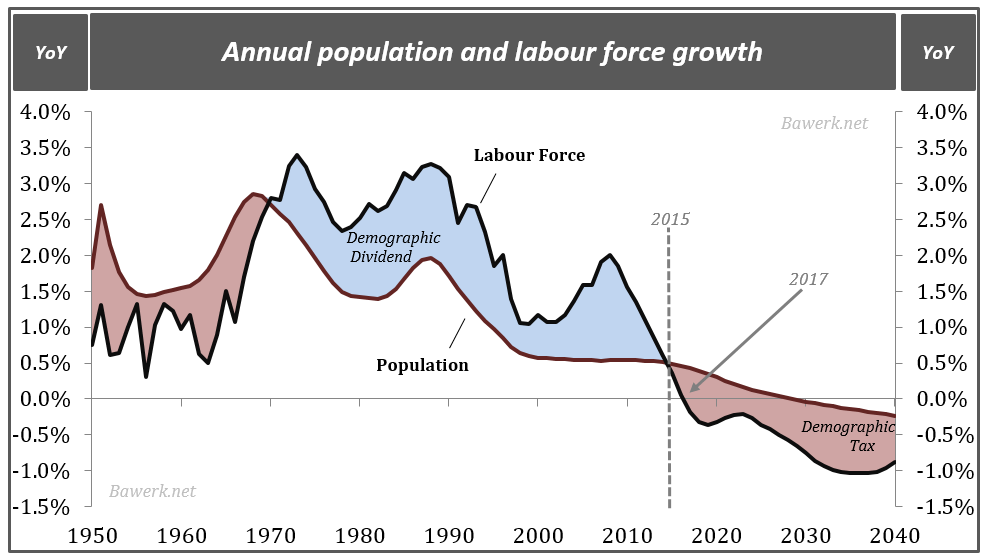 It is also interesting to note that Japan went through the exact same demographic shift just as its bubble burst and the need to adjust the economy toward one of ageing as China is about to undergo. Japan failed miserably, China will too. 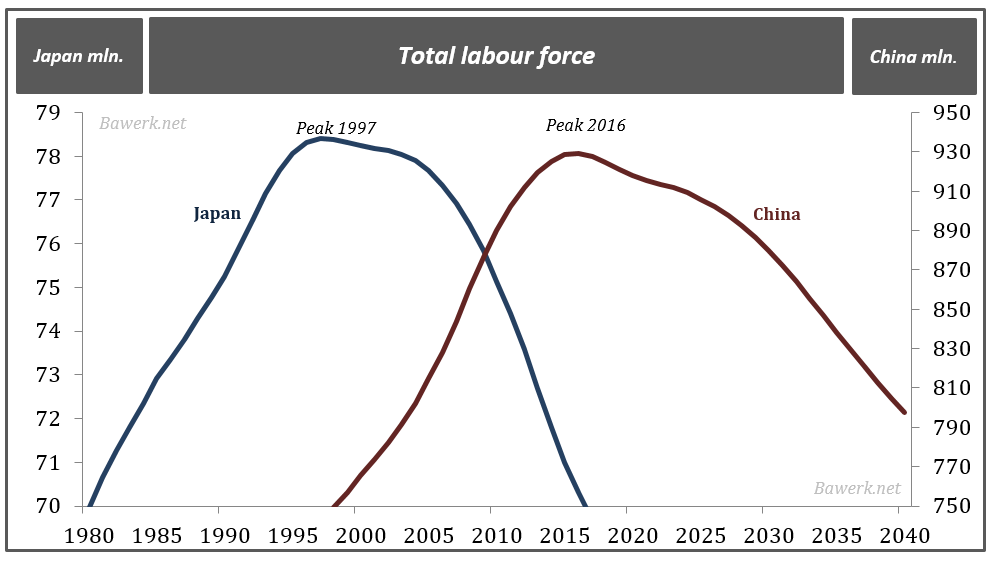 So where does all this leave us? The Chinese economy will soon move into contraction, its leaders will panic and jump in with both feet. Fiscal and monetary stimulus, bail-outs, more political control, increased use of censorship, talk about patriotic duty and who know what else.

What we do know is that it will look like this. 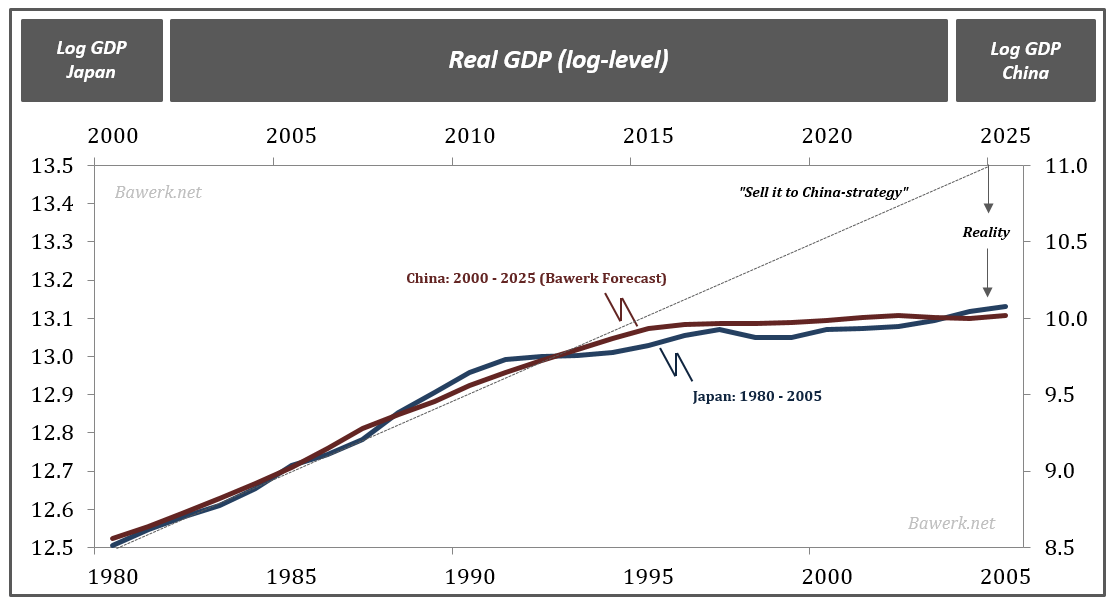 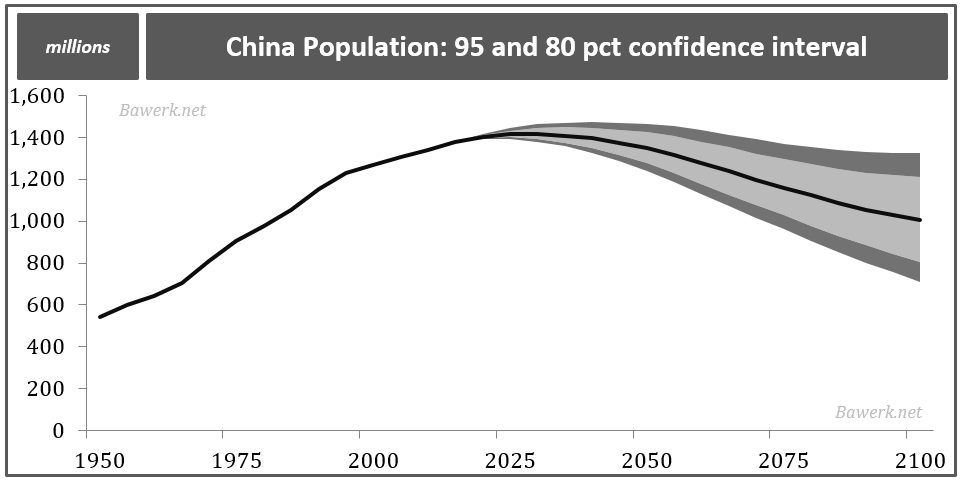 It is interesting to note that Marx, in his analysis of the capitalist economic system, basically concentrates on the study of the imbalances and…