While Chinese New Year seasonals are undoubtedly one factor in last night’s “surprisingly good” Chinese trade data, the following chart shows the level of “bullshit factor” was extreme by anyone’s measure. Three years ago we first brought China’s ‘fake’ trade data and abundant discrepancies to the public’s attention and despite an apparent crackdown by regulators, the gaping difference between imports from Hong Kong and exports to Hong Kong is downright embarrassing for China’s SAFE as it is clear that capital outflows are being disguised as exports with “over-invoicing” back in play. 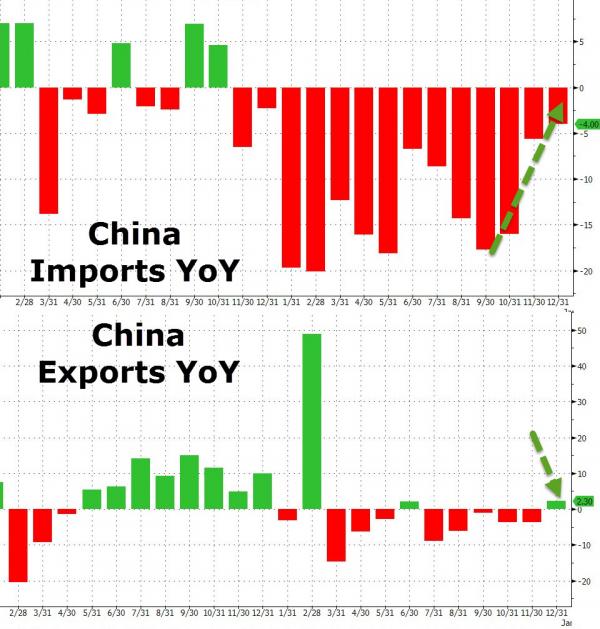 Chinese New Year seasonals (export-boosting into year-end) and despite China importing a record amount of oil, or 33.2 million tons, the trade surplus apparently surged and everything is proved awesome in China.

But, as we initially explained in 2013, one reason for the “surge” in recent data may be the demand of the new Politburo to telegraph that all is well following the recent turmoil since the magnitude of the surprise beat  could indicate exporters’ rush to finish year-end orders and government pressure to report exports before the end of the year to reach the government’s growth target.

However, possible explanation for how Chinese companies are cooking their export books comes from none other than Goldman:

“It is possible that local governments may have tried to boost exports data by either making round trips in special trade zones” or by exporting “earlier than otherwise in an attempt to improve the annual exports data,” Goldman Sachs’ Beijing- based economists Yu Song and Yin Zhang wrote the same day.

Rushed shipments and even faked exports to secure tax refunds may have contributed to the stronger growth data, according to Alistair Thornton and Ren Xianfang, Beijing-based analysts at IHS Inc.

Some trading companies are turning to transportation providers like Shenzhen Global Express Logistics Ltd. for help in shipping goods through so-called bonded zones to claim export tax rebates or charge higher import prices for goods without them physically leaving the country. Shenzhen Global offers customs clearing and other freight services including a “one-day tour,” Lin Yongtai, a manager with the company in the city bordering Hong Kong, said in a telephone interview.

For a fee of 1,000 yuan ($161) per vehicle per day, the company will drive trucks into warehouses in bonded zones, where cargo must clear customs, so that businesses can obtain a refund of value-added tax on the “export” of their products or boost sale prices for goods that carry the cachet of being imported.

“A poor villager can boast he has thousands of yuan of turnover every day, but people later discover he only has one bull — he takes the bull out every morning and brings it back every evening,” Lin said. “The same applies to some parts of China’s foreign trade.”

Of course, there is also the simple test of matching one country’s exports to another one’s imports (after all, it is a closed loop). 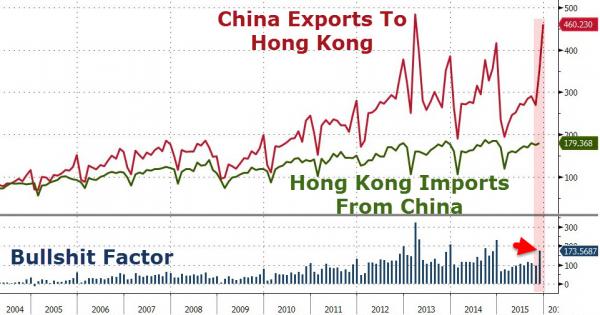 Once more, it appears that China is literally pulling numbers out of thin air:

UBS economists led by Hong Kong-based Wang Tao pointed to a “quite obvious discrepancy” in the growth of China’s exports to Taiwan and South Korea and those economies’ reported imports from China in recent months, even as historically they have tracked each other well.

Finally, that China is openly making up numbers is no surprise: it will continue doing that until, like everywhere else, the discrepancy between perception and reality (usually manifested in the case of China by a lot of angry people breaking something or simply rioting) becomes too glaring for even the most optimistically inclined to ignore.

Simply put, in a market that hangs on to every piece of good news like a drowning meth addict clutching at the tiniest of straws, the “over-invoicing” will continue until morale improves and optimism becomes self-fulfilling… except that has never, ever worked.