It is common knowledge by now that Federal Reserve Chairman Alan Greenspan oversaw, enabled and approved of, a major transition in the US economy. His infamous “Greenspan-put” in which his actions at the central bank would be driven, if not dictated, by the whims of financial markets, clearly led to higher asset prices. Investors obviously picked up on the strong bias in the Greenspan-Fed’s conduct of monetary policy as they slashed rates at the tiniest hiccup in financial markets, and kept them at low levels for much longer than what would be considered prudent by former administrations. Following markets on the escalator up and taking the elevator down together set a precedent that created a Frankenstein monster, which socialised losses through the printing press while privatizing profits. Such a system was and still is unsustainable as it more or less ensures valuations decouple from underlying fundamentals.

The monetary system in place since the gold-exchange standard that emerged from the rubbles of WWI clearly favours inflation over deflation, so we should expect values expressed in money to have an upward trend imbedded in them. However, a stable system would see nominal valuations rise more or less in tandem. In other words, we would expect a balanced sustainable system to see the price of apples, S&P500, cars, commodities and GDP grow more or less at the same pace.

Note, we are not saying certain markets will never experience idiosyncratic price movements due to their own peculiarities as driven by shifts in supply or demand. On the contrary, shifts inrelative prices are the one thing that make a capitalistic system stable over the long run. What we are saying though is that the upward trend in prices is due to a diminution of the value of moneyper se ,driven by the inherent inflationary bias in monetary policy execution. With stable money,relative prices would change, but not the overall price level. This is important, as any comparative analysis of the pre-Greenspan era versus recent past must take into account the fact that prices do rise, relentlessly. We must thus examine financial asset valuations in relation to other markets to understand what the Greenspan put mean.

One way to do that is to look at equity values relative to GDP. As the chart clearly shows, right after Greenspan takes charge of the Federal Reserve equity valuations move to a completely new paradigm. Monetary policy implementation completely changed under Greenspan’s watch.

Removing uncertainty about the future course of interest rates obviously created a herd mentality among investors. Why would anyone take a contrarian position when the central bank more or less told the public what the Fed would do? Do not fight the Fed emerged as the most profitable market mantra. What used to be extreme overvaluations in the pre-Greenspan era became the exact opposite under his watch. It is almost as Fischer’s unfortunate 1929 “stocks have reached a permanently high plateau“-prediction finally came true. Reversion to mean though, require a 50 per cent drop in equity values. A staggering 90 per cent drop is necessary to compensate for the current extreme over-valuation through an undershoot from the pre-Greenspan mean. 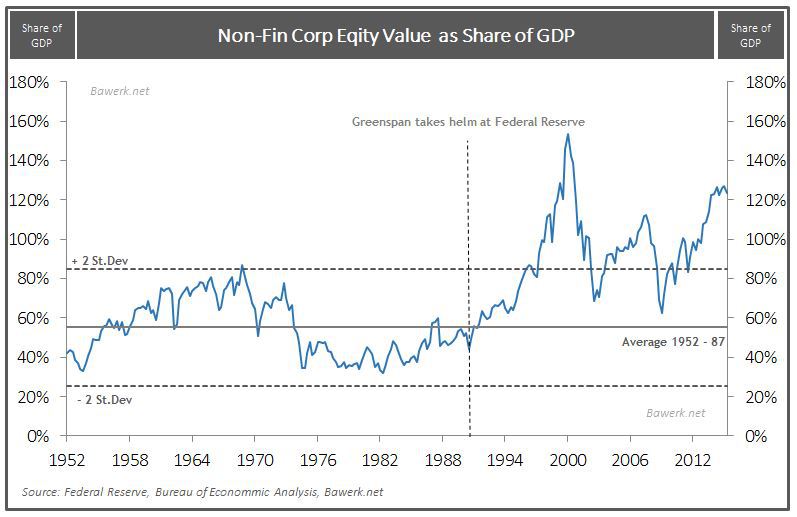 A better way at looking at equity valuations, which does not entail a flawed GDP concept, is to compare it with other asset classes. Our next chart depict US farmland and residential real estate compared to the S&P 500. The idea is that these all reflect somewhat the productive capacity of society and should therefore yield more or less the same. And throughout history they did. While they clearly diverged now and then, such as the equity boom of the 1960s, farmland bubble in the 1970s and housing in the 2000s, the massive divergence in equity valuations starting with Greenspan’s reigns stands out. 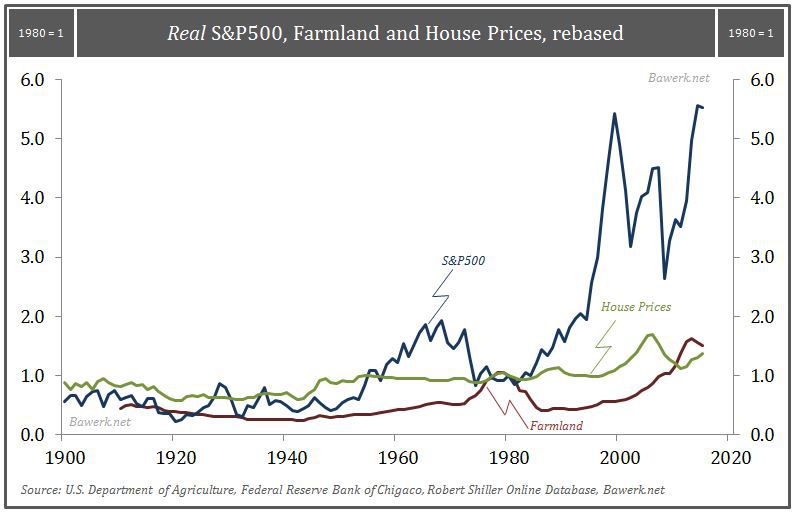 And this is not because farmand productivity suddenly fell. On the contrary, from the 1940s output per acre has steadily risen. This is central bankers herding investors into stocks by altering the risk/reward balance. 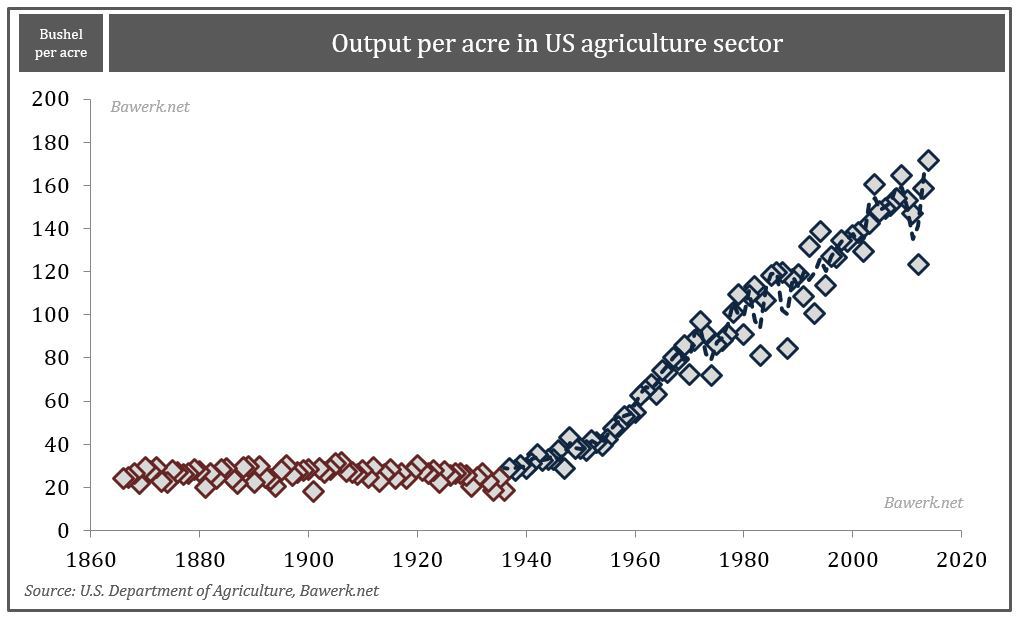 As a side note, with the latest bout of monetary madness farmland prices has indeed reached a new bubble; a bubble so severe that it makes the folly of the 1970s look like good old fashioned mid-western prudence. Turns out there were some unintended consequences of printing trillions of currency units after all. 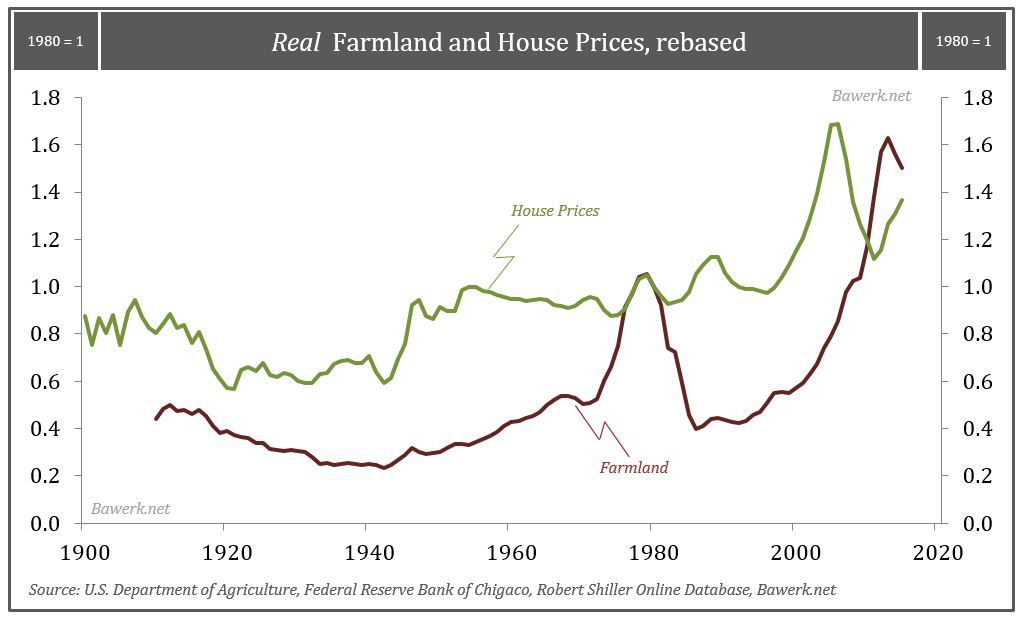 As we have shown here before, the S&P500 is extremely dependent on what happens around FOMC days. Excluding trading on the day of and after an FOMC decision shaves more than 40 per cent off the index.