During the reign of the mighty petro-dollar standard, it was necessary for major oil exporters to recycle their dollar holdings back into the dollar-based financial system to maintain their self-imposed exchange rate pegs. US government bonds are the very centrepiece of this elaborate system and it is thus no surprise to see the dollar price correlate well with overall OPEC TSY holdings. In other words, when oil prices were high, oil exporters amassed a capital surplus that were channelled into, among other things, US treasury bonds. When oil prices fell, oil exporters had to liquidate TSY holdings to cover capital shortfalls. 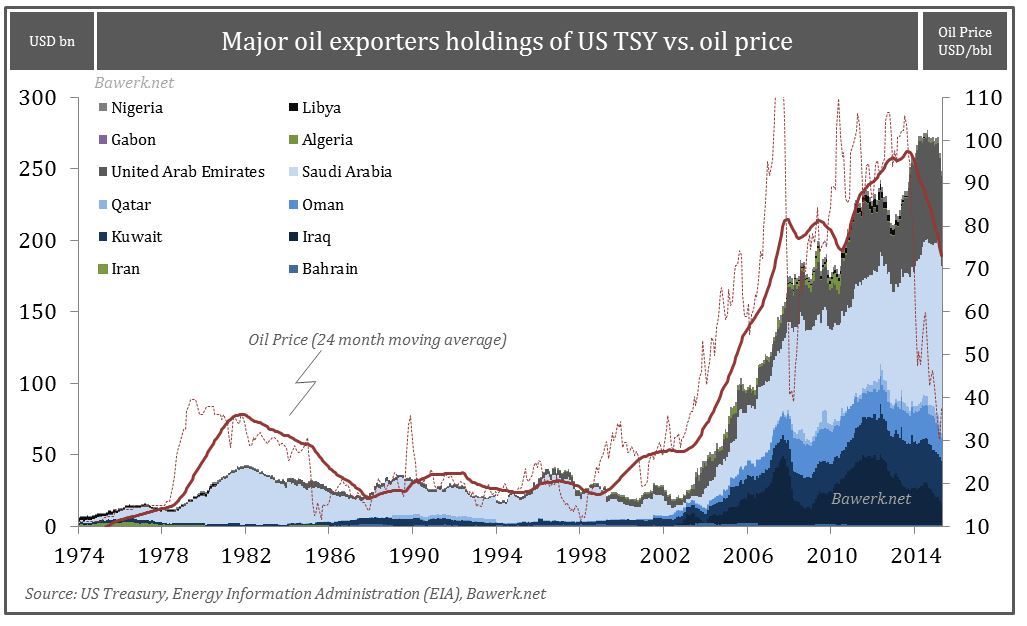 It is interesting to note that the more money and credit issued in the US the more foreign goods could be purchased by Americans and by extension the more foreign demand for US TSYs rose. The savings glut proposed by Bernanke was, and still is, nothing more than exported dollar inflation. There were no savings glut, but rather an indirect form of QE long before QE became an official policy. Home equity withdrawal lines through commercial banks, based on phony asset appreciation promoted by an accommodative Federal Reserve policy stance, increased Americans purchasing power, which inevitably leaked into global markets. Growing financial imbalances were exacerbated by the fact that there were no functioning pricing mechanisms to correct these flows.

With dollars flowing into oil exporting countries it would be natural for the recipient exchange rate to appreciate whilst the dollar depreciate. However, many oil exporters have pegged their exchange rate to the dollar so no such effect took place. Instead, local monetary authorities bought up dollars by inflating their own local currency to maintain the pre-set price. As the chart below shows, in a fixed exchange rate system pegged to a freely floating, and thus rapidly inflating and deflating, currency the LCU will have to inflate and deflate accordingly. With no price effect to soften the impact, any change in demand will be borne by supply. Compared to a flexible exchange rate regime, the inflation and deflation of the LCU will have to be larger with a fixed price of the LCU in relation to the dollar. 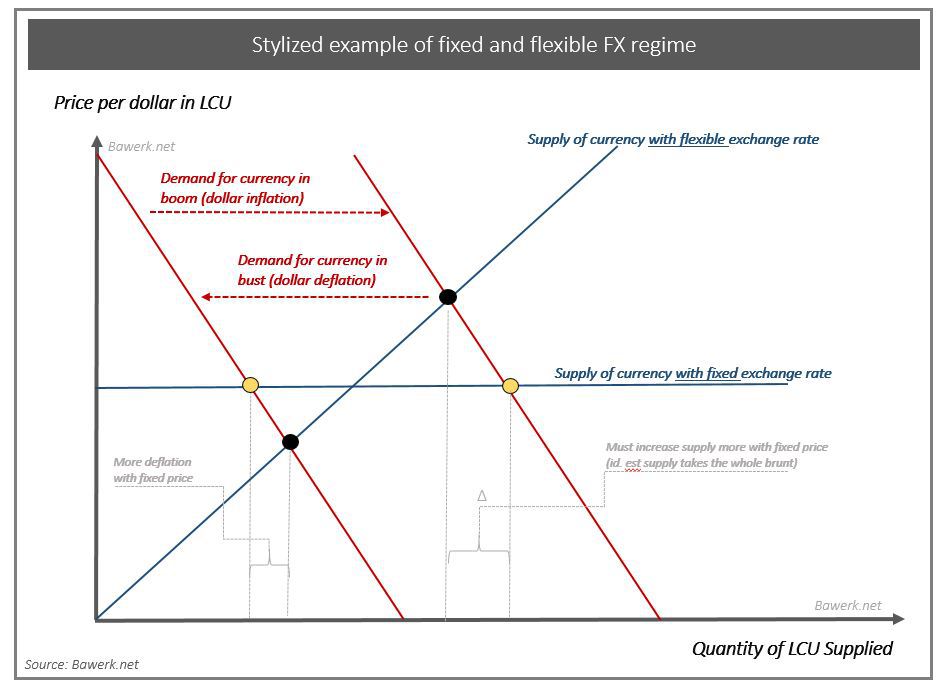 In the boom time it is easy to adjust as the monetary authorities can inflate the LCU to buy up dollars and create the consequent phony boom in the domestic economy. Local businesses thrive, credit is plentiful and asset prices rises. Very few complain.

However, as the dollar deflation takes hold the very opposite effect must by necessity occur. To maintain the exchange rate peg monetary authorities must buy up LCU through sales of previously accumulated dollars.

The key metric to watch for dollar dependent economies with exchange rate pegs is the value of domestic money supply (at the fixed dollar price) relative to FX reserves. If domestic claim to dollars, id est money supply, exceed FX reserves it is highly likely that the monetary authorities will be forced to devalue in order to realign the two metrics. If we look at an economy like Saudi Arabia, where there have been a lot of talk about devaluation, we find that there are more than enough FX reserves to cover the outstanding money supply. Since there will be no positive effect from a devaluation, there are no immediate devaluation threat. 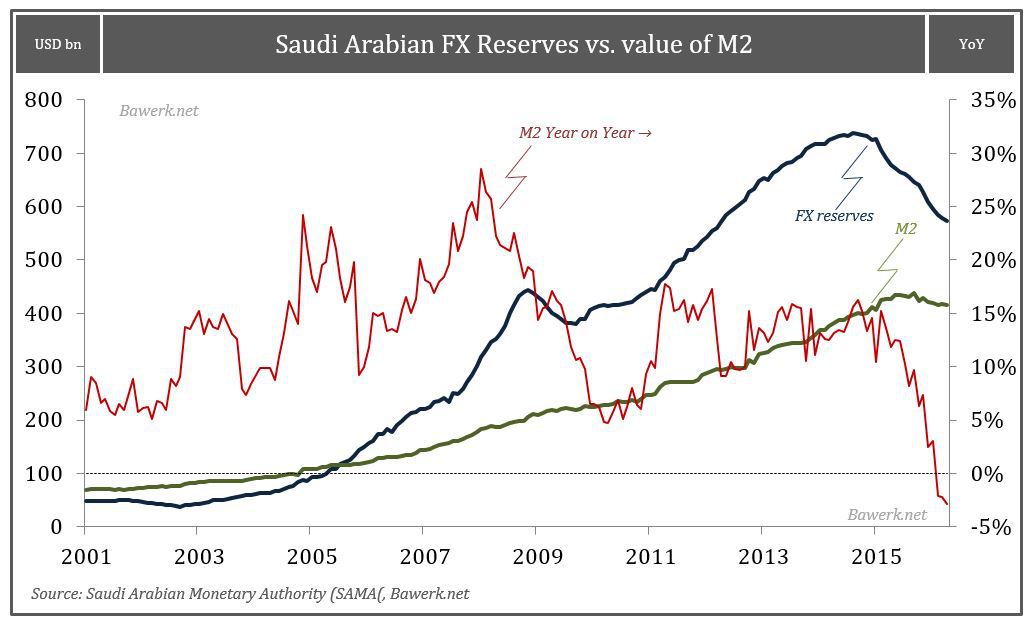 However, at current trends the FX reserves will drop below M2 by late 2017 or early 2018. Current trends does not lead to very pleasant outcomes for the Saudi economy because the domestic money supply is and will continue to deflate. This will expose internal malinvestements, which will show up as increasing NPLs in the banking sector, which in turn will lead to further deflation.

It is thus tempting for the Saudi government to reflate their economy by pushing more Riyals into the system; but this runs the risk of exacerbating the possibility of devaluation as the money supply will soon exceed falling FX reserves.

As most of the rest of the world, also the Saudis have become path dependent; 1) maintain the peg, control price inflation through continued deflation of the money supply and get a full-blown banking crisis; or 2) alternatively, reflate the money supply, increase speculation in riyal forwards, devalue and get massive price inflation through the extremely important import channel.

This obviously begs the question; at what oil price can the Saudi’s mange to muddle through without ending up in either 1 nor 2.  At today’s price of around USD50 / bbl Saudi Arabia will burn through USD90bn worth of reserves per year. 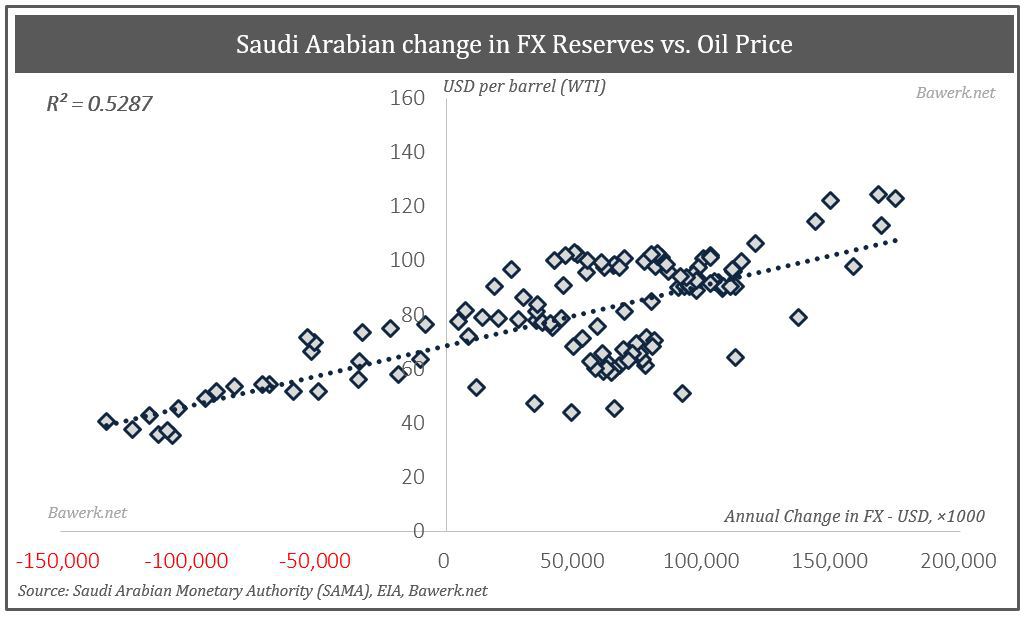 This means under a mild deflationary scenario FX reserves will fall below M2 already by early 2018; even with a 10 per cent cost reduction. At 60 dollar and only 2 per cent reduction in cost Saudi Arabia will probably not have to worry about severing the peg. 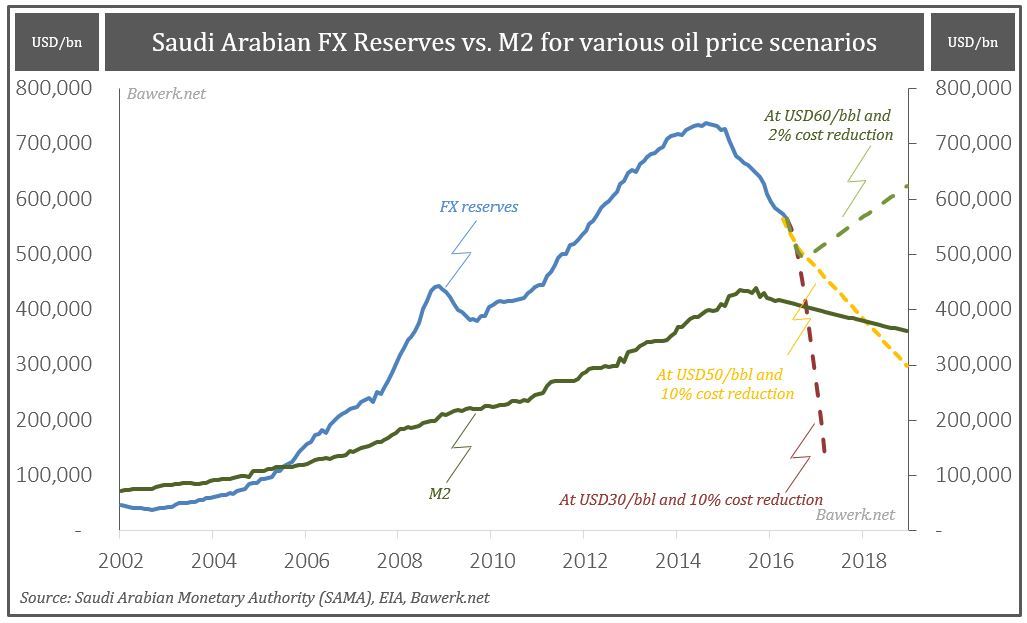 Unless prices continue upwards, it will be interesting see what route, and which risks, the Saudi government is willing to take on. For now it appear route 1 is the preferred one, but as the banking crisis escalates we expect a gradual movement toward route 2. Unless oil prices spikes back to USD60 /bbl plus, and save the day. We doubt it!

Sean Corrigan has been interviewed by the Frankfurter Allgemeine Zeitung. German readers can view the original article. For the sake of the rest of…