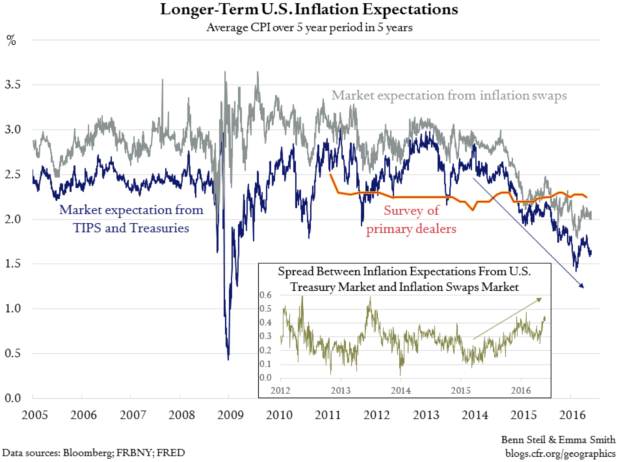 Former Minneapolis Fed president Narayana Kocherlakota says that the Fed has a credibility problem.  Investors, he argues, have lost faith that the Fed will hit its 2 percent inflation goal even in the longer-run.  It should therefore reverse course and ease policy.

As evidence, Kocherlakota points to the decline in the so-called five-year five-year breakeven inflation rate—a market-based measure of inflation expectations. This is the spread between nominal U.S. Treasury securities and those protected against inflation (known as TIPS) over a five year period beginning in five years. As shown in blue on the graphic above, this rate has fallen by 1 percentage point since mid-2014, to 1.6 percent. This is the fulcrum of his argument that the Fed has lost credibility in getting us back to 2 percent inflation.

Yet the five-year five-year breakeven inflation rate, Kocherlakota acknowledges, is determined by factors other than expected inflation—and is therefore not necessarily an accurate measure of it.  It is also influenced by the liquidity risk premium investors demand for holding less-liquid TIPS rather than more-liquid Treasuries.  If this risk is material, then investors are actually expecting, all else being equal, future inflation above 1.6 percent—something closer to the Fed’s 2 percent target.  This would weaken Kocherlakota’s argument.

But is liquidity risk material?  A 2014 Fed paper warns that the liquidity risk premium “significantly distorts the informational content of TIPS breakeven inflation”—meaning that it underestimates expected inflation.  Kocherlakota dismisses its importance in recent years.  But he is wrong.  As the bottom right figure in our graphic indicates, a standard indicator of the liquidity risk premium—the difference between inflation expectations derived from Treasury securities and from inflation swaps (another market-based measure)—has increasedmarkedly since 2015.  This suggests that part of the fall in the breakeven rate since mid-2014 owes to greater perceived liquidity risk rather than lower expected inflation.

Another factor influencing the breakeven rate is the premium investors demand for bearing inflation risk.  This is not the same as their expectation of future inflation, but rather the risk that inflation is higher than expected.  Holders of Treasuries want compensation for bearing this risk.

So what has happened to this risk premium? In mid 2014 respondents to the Fed’s survey of primary dealers assigned a 28 percent probability to inflation averaging above 2.5 percent at the five-year five-year horizon.  This is now down to 22 percent.  Expectations of “abnormally” high inflation (more than 0.5 percent above target) are therefore down. Recent Fed work suggests that the risk premium has also fallen because the expected return on Treasuries has shifted from being pro-cyclical to being counter-cyclical.  Broadly, investors are willing to accept a lower risk premium on assets that perform well in periods of low economic growth so as to smooth expected returns over the course of the business cycle.

The fall in the inflation risk premium suggests, yet again, that it is a mistake to attribute too much of the decline in the breakeven rate to lower expected inflation.  Some – perhaps most – of the decline in the breakeven rate reflects a greater liquidity risk premium and a lower inflation risk premium.  This in turn suggests that the 1.6 percent breakeven rate actually reflects expected inflation closer to 2 percent.  And indeed, as our graphic shows, the Fed’s survey finds current long-run inflation expectations of 2.25 percent.  (These are expectations for CPI inflation, which tends to be slightly above the Fed’s target measure—PCE inflation.)

Kocherlakota argues, however, that a fall in the inflation risk premium would itself be a blow to Fed credibility—even if the breakeven rate is too low as a valid measure of actual inflation expectations.  This is because he says it would reflect a situation in which the market’s estimate of the risk of inflation and employment being low relative to the Fed’s targets is rising.  Yet the Fed’s survey data show that the probability assigned to inflation below 1.5 percent has, in fact, remained steady.

In a detailed 28-minute conversation, I spoke last night to Professor David Howden, Associate Professor of Economics at St. Louis University, in Madrid, about…