Editor’s Note: Philipp’s terrific new book “Blind Robbery! How the Fed, Banks and Government Steal Our Money” is now available (Publisher: FinanzBuch Verlag (June 6, 2016)). You can find it at Amazon here. Below is the introduction. The book gives an excellent outline for beginners as to how our monetary system works and how it extracts wealth from the people. 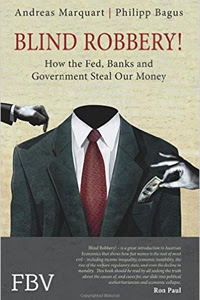 “The biggest disaster in human history.”

That is how economist Roland Baader (1940–2012) describes the state’s control over the money supply. This is a bold statement — because almost no one dares to question the state’s monopoly on money creation these days.1

How about you? Have you ever questioned the monetary system we have? No? Do you think that monopolies are bad? Economists usually describe them as leading to waste, inefficiency, and higher prices. So why should it be any different when it comes to money? Is not money that keeps its purchasing power over time something of great value to everyone? Would you let a state monopoly decide what and how much you eat every day? Of course not. But that is exactly what is happening with money!

If our money is so secure in the hands of the state, then why does it keep losing its purchasing power? You may object that a monetary system controlled by the state is still better than leaving such an important function to the so-called free market. But are you sure? Why is the central bank (the Federal Reserve in the U.S., or the European Central Bank in the eurozone) allowed to create more and more new money? Why does the state allow the commercial bank around the corner from you to create money out of thin air in the form of credit (loans)? Why is your bank allowed to loan out to others money that you have deposited into your checking account? After all, you might need that money again soon! When the money is loaned out (and a large portion of it is loaned out), how can it still be available to you when you want it?

What will happen to you if you print money? One thing is certain: you won’t get past “Go.” You won’t collect $200. But you will go directly to jail! You see, monopolists don’t like competition. They want their monopoly protected.

Based on information from the European Central Bank (ECB), in the eurozone the M2 money supply, which consists of cash, checking deposits, and short-term savings deposits, has doubled since the year the euro was introduced. But if you live in Europe, did the money in your bank account double during that period? No? Did you at least see your income double, then? Again, probably not. Now ask yourself this question: If the money supply in the eurozone doubled, but your bank balances didn’t, then is it not reasonable to conclude that the additional money must have ended up in the accounts of someone else? If that person already had more money than you, then he now has even more. In this case, the person who started out richer than you has become even richer, and relative to him you have become poorer. In the U.S., the M2 money supply has increased at an even faster pace. From 1999 to 2015, M2 almost tripled. Has your American bank account grown three times as large?

But if you expect this book to be a hate-filled rant against the “evil rich” and the CEOs who exploit their poor workers, and who must be forced by law to pay decent wages, or at least a minimum wage, then you would be wrong. Every person — and this includes you — acts from the same motivation. The motivating factor for human action is always the desire to improve one’s own well-being and one’s own situation.2

No one should blame another for seeking to improve his situation by acquiring more money or more wealth. It is just human nature. If this motivation were not part of our nature, we would probably still be living in caves. What is important is which means or tools you use to enrich yourself. Some people are more focused than others in their pursuit of wealth, even to the point of using immoral or even criminal means.3

If you are of the opinion that people are becoming more and more self-centered and ever less willing to help others, then perhaps the real causes are to be found in our monetary system itself. That is to say, in a monetary system that makes possible the creation of a gigantic, debt-financed welfare state. The welfare state destroys the willingness of people to help each other. Instead of helping someone directly and personally, we push the responsibility onto the state, and tell ourselves, “Well, I already paid enough in taxes.”

Do you have the feeling that our society is falling apart? The underlying causes of this are to be found in the nature of our monetary system: this explains why the few profit from the many, why traditional societal bonds continually wear thin, why people become more materialistic and less caring, why the rich get richer and the poor get poorer. This is why we wrote this book: to explain to you why this is so.

And fear not! You do not need to be an economist to be able to understand this. It is probably even an advantage if you have not taken economics classes, since they tend to corrupt your ability to think clearly about economic issues. In any case, what awaits you in this book you would not get in an economics class at a standard government school or university. You just need common sense. We promise.

But let us warn you right now: by the time you have finished this book, you will look upon the world with fresh eyes. So if you think all is right with society and you are happy and content with your life, you can just put this book down right now. Do you really want to read on? Take some time to decide …

Ok. If you are reading this sentence, you have made the decision to join those courageous enough to learn something new. Congratulations! You made the smart choice! Only when enough people know about the perversion and the injustice of our monetary system will there be hope for change. You are our hope. We are counting on you!

After reading this book, you will see many things from a different viewpoint. That is because you will know what constitutes good money, and you will know that our current money is bad money. You will see how important good money is for our economy, and what fateful influence bad money has on income and wealth distribution in a society. You will understand why the state has seized control of the monetary system and why it wants to hold on to that control.

You will learn why bad money always leads to economic downturns and recessions, why banks get into trouble, and why the prices of goods and services always rise.

We will arm you with the knowledge to make you able to tell the difference between good and bad economic theories and teachings. We also offer our book as an antidote to the very popular tome Capital in the Twenty-First Century. This book, written by the French economist Thomas Piketty, generated worldwide buzz and acclaim. According to Piketty’s theory, it is capitalism that is responsible for the increasing inequality in income and wealth. What nonsense!

U.S. President Barack Obama, International Monetary Fund (IMF) boss Christine Lagarde, and even the Pope are said to have read Piketty’s book. If you happen to see one of them, perhaps you could hand them a copy of this book. Otherwise you will be burdened with still more taxes and regulations, which is exactly what Piketty proposes.

You will also learn about the state, government, and politics here. If you have faith in the competence of the state, then it is highly likely that you will lose that faith. And if you have never trusted politicians, you will see your belief confirmed and vindicated here.

And when you have finished reading you will be able to understand why bad money is at the core of what is wrong with our society, even extending down to the most basic societal unit — the family. This connection is not immediately recognized because of a tangled web of state interventions, but it exists just the same.

State interventions cover up the true causes of harmful developments in the economy and society, like the application of many layers of paint. Reading this book will allow you to strip away all the layers of paint, and in the end you will be able to recognize, see, and understand the unvarnished truth.

We hope that you enjoy this book.

Philipp Bagus is Professor for Economics at University Rey Juan Carlos in Madrid. He has just published a devastating critique of the euro: The Tragedy of the Euro. In his book, he explains the political interests behind the common currency and why the euro is a tragedy of the commons. He can be contacted at philipp.bagus@urjc.es. Read more articles at his website, http://www.philippbagus.com/.

“Je ne suis pas Charlie. I am not Charlie, I am not brave enough. “Across the world, and certainly across Twitter, people are showing…