Walter W. Heller was said to have been an “educator of Presidents.” As an economist and Presidential advisor in the inner circles of DC, Heller worked with more candidates and officeholders than perhaps any other man. As he himself described, his influence went all the way back to Adlai Stevenson and kept on through Kennedy, Johnson, Carter, and Mondale. To his mind, he takes credit for turning Presidents into thorough Keynesians starting with JFK in January 1963 and the tax cut “stimulus” that Heller claims was “born on my desk.”

As an economist and advisor, Heller seems to have spent a lot of time about the 1960’s and almost none describing the 1970’s. Perhaps his greatest contribution to that decade was a quote attributed to him describing economics. “An economist is a man who, when he finds something works in practice, wonders if it works in theory.”

Among the most pernicious of these theories to have been backward applied in exactly that manner is “rational” expectations theory. This was developed in the 1980’s to try to explain the disaster of the 1970’s in terms that would save econometrics. Thus, it is applied in great detail and mathematics to “inflation” and is often discussed only in that context. Among the most influential to have used rational expectations theory was John Taylor as the basis for the Taylor “rule.”

In a 2007 speech, then-Federal Reserve Chairman Ben Bernanke described the updated expectations framework as it at that time related to inflation and gradualism in monetary policy (into the onrushing storm).

The traditional rational-expectations model of inflation and inflation expectations has been a useful workhorse for thinking about issues of credibility and institutional design, but, to my mind, it is less helpful for thinking about economies in which (1) the structure of the economy is constantly evolving in ways that are imperfectly understood by both the public and policymakers and (2) the policymakers’ objective function is not fully known by private agents. In particular, together with the assumption that the central bank’s objective function is fixed and known to the public, the traditional rational-expectations approach implies that the public has firm knowledge of the long-run equilibrium inflation rate; consequently, their long-run inflation expectations do not vary over time in response to new information.

His second caveat suggests the dramatic change in central banking behavior after the Great Inflation; though the Fed would not until the 1990’s fully adopt this approach. Prior, central bank policy was believed best kept with as little public information as possible. As 1920’s era Bank of England governor Montagu Norman famously projected, “never explain; never apologize.” Indeed, the world to this day does not know exactly when the Federal Reserve shifted to interest rate targeting during the 1980’s, but now it is commonplace for all kinds of internal FOMC information to be disclosed (though in the case of the 2008 transcripts too late to keep these economists from further wreaking havoc with their naked ignorance).

Rational expectations also has other applications beside inflation; given the state of constant “extraordinary” monetary policy like QE you could argue (from this orthodox perspective) it is all that matters. Mark Sniderman of the Cleveland Fed did in late 2012, around the time of QE3 wonderment:

Not only is transparency important in a democracy for its own sake, but also because it will lead to better economic outcomes. Drawing on the insights from rational expectations, central banks now recognize that the public can make wasteful economic decisions if it constantly has to guess what the central bank is doing, and that the public is not going to be systematically fooled in any event. Fundamentally, if the public does not trust its central bank to make good decisions, it will take actions to protect itself from what it perceives to be the harmful effects of those policies.
Today, best practices in central banking require policymakers to be explicit about their objectives and to gain the credibility necessary to achieve them. To be credible, central banks must have objectives that can be feasibly achieved through time; they must have policy tools that can get the job done; and they must provide the public with the information it needs to understand how the central bank is likely to respond to evolving conditions.

Unfortunately for these monetarists and their “rules”, we the public know without any doubt how the central bank will respond to “evolving conditions.” They will either tell us (with increasing emphasis) conditions aren’t evolving or if they ever admit they are central bankers will just do more of the same. Europe and Japan fall into the latter category; the US by contrast has been pinned to some argument of “full employment” for almost two years now – without much evidence for it beside the unemployment rate moved far, far more by its denominator.

This has tested Sniderman’s common sense thesis about rational expectations in the public realm; “if the public does not trust its central bank…it will take actions to protect itself from what it perceives to be the harmful effects of those policies” or their consequences. In the case of US QE, those include not just failure to restart the economy but also many, many depressive instincts that have gone along with it (and are becoming more apparent by the month). Having chose the former path (recovery is the only future), the Federal Reserve becomes entangled in the lie because now admitting failure of QE (ZIRP and anything else) holds radical consequences to long run stability.

To that point, we see how objectively atrocious retail sales are described continuously as “strong” even though related manufacturing business here and abroad “somehow” falls into obvious contraction. It is public dissonance; the media sells an economic narrative derived from mainstream economists and really the credentials of policymakers that it then has to contradict by statistics that don’t ever match it. Until the past few months that has meant exclusive reliance on the mainstream payroll numbers. The May report, however, threatens to unravel the entire monetary policy basis for more than just the economy this year.

Rather than admit how a weak jobs market would be perfectly consistent with everything else, rational expectations demands orthodox economists continue to claim down is up.The latest:

At an almost nine-year low of 4.7 percent in May, the jobless rate was around the level that most Fed policy makers reckoned was equivalent to full employment when they released their last economic estimates in March.
As Yellen and her colleagues prepare for another policy making meeting starting Tuesday, they face a dilemma. Is the recent slowdown in jobs growth — payrolls have risen 116,000 per month since March compared with last year’s average 229,000 pace — mainly the result of dwindling demand for labor or of shrinking supply?

Yes, you read that correctly. Bloomberg actually published an article raising the prospect that the awful payroll numbers this year might actually have been due to too much economic success; that there has been so much hiring that they aren’t nearly enough workers left to be hired. It’s hard to fathom in an economic system where 15 or 16 million potential laborers have disappeared from the official statistics, but when backed so far into a corner the long run “anchor” of faith in QE and monetary policy must be preserved at the cost of easy ridicule. 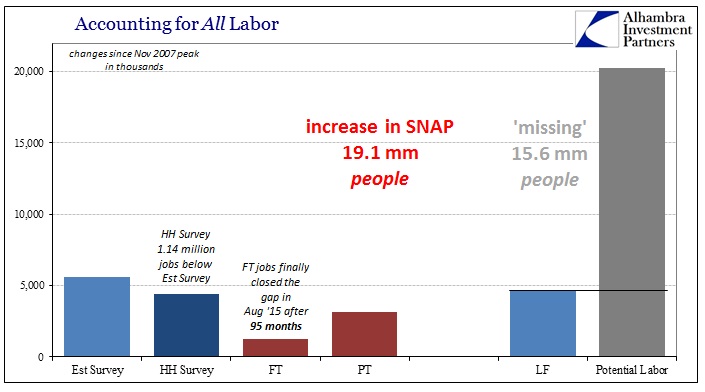 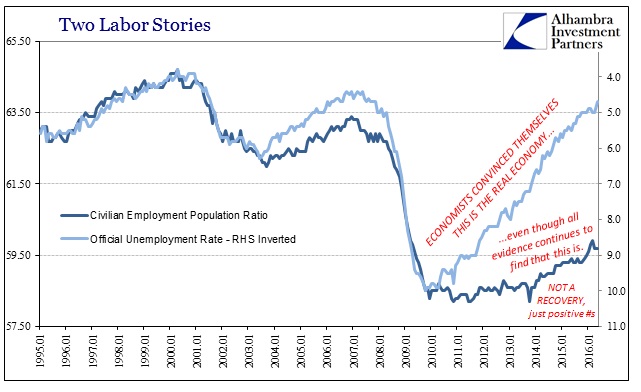 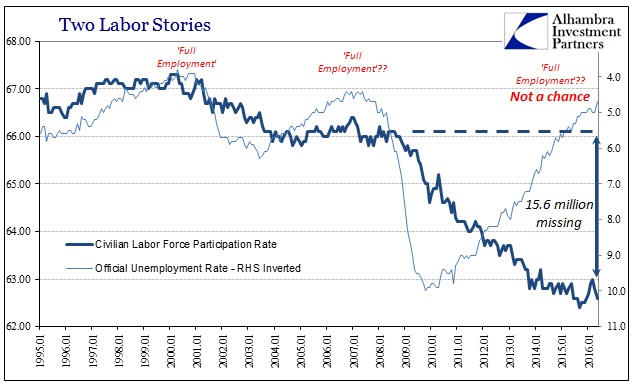 Thus, we have a 21st century update to Mr. Heller’s observation of economists. An economist is a woman who when finding something works in theory cares not about how it goes in practice. The models all say QE works and works well; therefore it will be described in those terms no matter what, where the theory is the immutable fixed point by which everything must be not just described but understood. It certainly isn’t rational, but then again the theory never was owing to its origins in pure mathematics. It leads to this Orwellian world where the only thing that matters to economists and the media is the economy as it “should” be rather than how it actually is.

Last month The Cobden Centre organised the Future of Artificial Intelligence roundtable discussions in the European Parliament. We had the IMF, United Nations, OECD,…