The inexorable effect of contemporary central banking is serial financial booms and busts. With that comes increasing levels of systemic financial instability and a growing dissipation of real economic resources in misallocations and malinvestment. At length, the world becomes poorer.

Why? Because gains in real output and wealth depend upon efficient pricing of capital and savings, but the modus operandi of today’s central banking is to deliberately distort and relentlessly falsify financial prices.

After all, the essence of ZIRP and NIRP is to drive interest rates below their natural market clearing levels so as to induce more borrowing and spending by business and consumers.

The same is true of the hoary doctrine of “wealth effects” stimulus. After being initiated by Alan Greenspan 15 years ago, it has been embraced ever more eagerly by his successors at the Fed and elsewhere ever since.

Here, the monetary transmission channel is through the top 1% that own 40% of the financial assets and the top 10% that own upwards of 85%. To wit, stock prices are intentionally driven to artificially high levels by means of “financial easing”. The latter is a euphemism for cheap or even free finance for carry trade gamblers and subsidized hedging insurance for fast money speculators.

As the stock averages rise and their Fed-subsidized portfolios attain ever higher “marks”, the wealth effects operators supposedly feel, well, wealthier. They are thereby motivated to spend and investment more than otherwise, and to actually double-down on these paper wealth gains by using them as collateral to obtain even more cheap funding for even more speculations.

The trouble is, financial prices cannot be falsified indefinitely. At length, they become the subject of a pure confidence game and the risk of shocks and black swans that even the central banks are unable to off-set. Then the day of reckoning arrives in traumatic and violent aspect.

Exactly that kind of Lehman-scale crisis is now descending on global markets. In two nearby postings today we highlight bookend events which document why the end result of today’s massive central bank intrusion in financial markets is, everywhere and always, crisis.

Today central banks and their affiliates own about $21 trillion of government bonds and related securities. Most of that has been purchased in the last two decades and the preponderant share since the 2008 crisis. 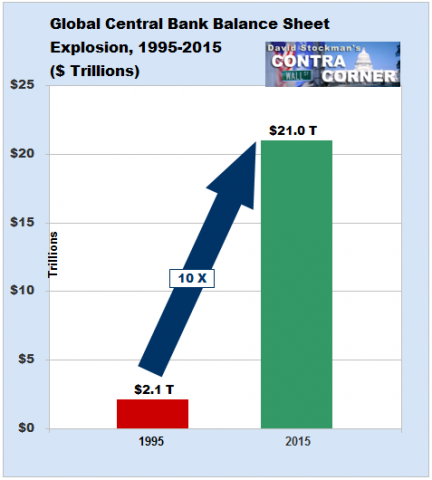 The effect of that giant central bank thumb on the scales at the very interior of the fixed income markets—–that is, the benchmark government securities sector—–has been to radically inflate sovereign bond prices. In turn, that drastic mispricing has spread to the balance of the fixed income spectrum via spread pricing off the benchmarks, and from there into markets for converts, equities and everything else.

Above all else, the QE driven falsification of bond prices means that central banks have supplanted real money savers as the marginal source of demand in the government bond markets. But by their very ideology and function, central bankers are rigidly and even fiercely price inelastic.

For example, the madman Draghi will pay any price—-absolutely any price—–to acquire his $90 billion per month QE quota. He sets the price on the margin, and at the present that happens to be a yield no lower than negative0.4% for a eurozone government security of any maturity. Presumably that would include a 500-year bond if the Portuguese were alert enough to issue one.

Needless to say, no rational saver anywhere on the planet would “invest” in the German 10-year bund at today’s negative 20 bps of yield. The operational word here is “saver” as distinguished from the hoards of leveraged speculators (on repo) who are more than happy to buy radically over-priced German bunds today. After all, they know the Frankfurt madman stands ready to buy them at an even higher price tomorrow.

Yet when you replace savers with central bankers at the very heart of the price discovery process in financial markets, the system eventually goes tilt. You go upside down.

That condition was aptly described in a lengthy Wall Street Journal piece today about a recent development in sovereign debt markets which absolutely defies human nature and the fundamental dynamics of modern welfare state democracies.

That is, modern governments can never stop issuing more debt due to massive entitlement constituencies, special interest racketeers of every stripe and the prevalence of Keynesian-style rationalizations for not extracting from taxpayers the full measure of what politicians are inclined to spend.

Yet there is now a rapidly growing “scarcity” of government debt—-the equivalent of a fiscal unicorn:

A buying spree by central banks is reducing the availability of government debt for other buyers and intensifying the bidding wars that break out when investors get jittery, driving prices higher and yields lower. The yield on the benchmark 10-year Treasury note hit a record low Wednesday.

“The scarcity factor is there but it really becomes palpable during periods of stress when yields immediately collapse,’’ he said. ”You may be shut out of the bond market just when you need it the most.’’

On Wednesday, the yield on the 20-year Japanese government bond fell below zero for the first time, joining a pool of negative-yielding bonds around the world that has expanded rapidly over the past year. In Switzerland, government bonds through the longest maturity, a bond due in nearly half a century, are now yielding below zero. In Germany, government debt with maturities out as far as January 2031 is trading with negative yields.

Owing to this utterly insensible “scarcity” central banks and speculators together have driven the yield on nearly $12 trillion of government debt—or nearly 26% of total outstandings on the planet—into the subzero zone. This includes more than $1 trillion each of German and French government debt and nearly $8 trillion of Japanese government debt. 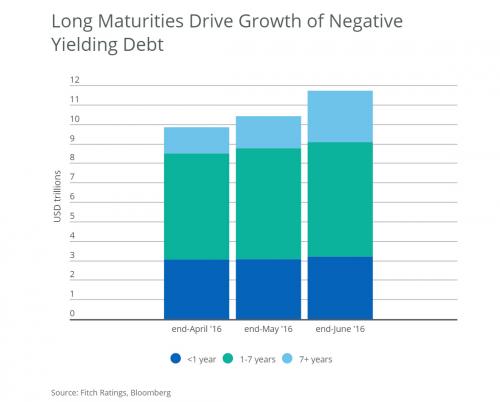 Yet the growing prevalence of fiscal unicorns has an even more bizarre twist. That’s because the ECB’s money printing rules require its bond purchases to be allocated on roughly a pro rata basis among its member countries.

So the punters who piled into bunds in response to the Brexit event, drove even more of the German yield curve below the ECB’s negative 0.4% cut-off points.

Accordingly, there is now a “no buy zone” out to 8-years on the German government yield curve. That’s “scarcity” in spades, and ridiculous, too. 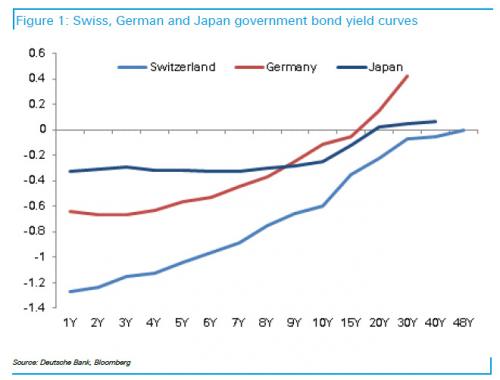 Nor is that the extent of the subzero lunacy. As also indicated in the chart, the Swiss yield curve is negative all the way out to 48 years, where the bond actually traded at -0.0082%. Likewise, the 10-year JCB traded at negative 27 bps today while the 40-year bond yields a scant 6 basis points.

So we do mean systematic falsification of financial prices is the sum and substance of what contemporary central banking does. Forty years from now, for example, Japan’s retirement colony will be bigger than its labor force, and its fiscal and monetary system will have crashed long before.

But no matter. Before it self-destructs, the BOJ will buy all the Japanese government debt, anyway. It already owns 426 trillion yen worth—an amount that equals fully 85% of GDP.

When it comes to government debt, therefore, it can be well and truly said that “price discovery” is dead and gone. Japan is only the leading edge, but the trend is absolutely clear. The price of  sovereign debt is where central banks peg it, not where real money savers and investors will buy it.

Yet that’s only half the story, and not even the most destructive part. The truth of the matter is that the overwhelming share of government debt is no longer owned by real money savers at all. It is owned by central banks, sovereign wealth funds and leveraged speculators.

As to the latter, do not mistake the repo-style funding deployed by speculators with genuine savings. To the contrary, it’s pure credit extracted from the value of bond collateral being driven ever higher by the Big Fat Bid of central banks.

What this means is that real money savings—– which must have a positive nominal yield—-are being driven to the far end of the sovereign yield curve in search of returns, but most especially ever deeper into the corporate credit risk zone in quest of the same.

At the present moment, for example, there is nearly $3 trillion of junk bonds and loans outstanding in the US alone, and that is double the level extant on the eve of the great financial crisis. But double the money embodies far more than double the risk.

That’s because a very substantial portion of current junk credit outstandings went into speculations that even LBO shops wouldn’t have entertained 15 years ago. To wit, it was used to fund radical commodity price speculations in the shale patch, mining and other commodity plays, subprime auto lending schemes and financing for stock buybacks and dividend recaps by highly leveraged companies.

Indeed, the scramble for yield generated by central bank action has systematically impregnated the global markets with FEDs (financial explosive devices). Even as approximately 100 principal central bankers have spent the last seven years pushing interest rates toward the zero bound or below, there have been millions of financial operators and capital users scouring the earth for ways to escape it.

Today, one of these zero bound escape routes blew sky high when the 9.5% contingent convertible bond of 2049 issued by an obscure German bank, Bremer Landesbank (BLB), plunged by 40% from 120 to 73 in just minutes—–a move which has, in turn, spooked broader global markets. 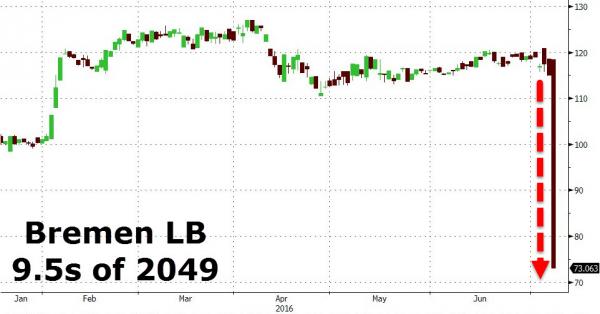 It turns out that Bremen LB is a $29 billion German state-owned bank heavily invested in shipping loans that is now facing massive write downs and the need to raise capital from its principal owners—-German Landesbank NordLB, the city of Bremen, and the savings banks association in Northrhine Westphalia.

Here’s the thing. All the parties involved were into risk that extended way over the end of their financial skis. Indeed, the cliff diving bonds shown above were at the very end of a long chain of mispricings emanating from today’s central banking regime.

It originated awhile back when cheap debt available to households in the US and Europe caused a consumption boom there and an oversized export boom in China and the far east. Next, more cheap capital enabled by the Asian central banks funded an artificially large investment boom in China and among its EM supply chain, which, in turn, caused demand for bulk, crude oil and container ship capacity to surge.

Needless to say, still more cheap capital generated a massive excess of highly leveraged ship-building capacity that needs cash flow to service its debt. So the huge state enabled ship-building industries of China and South Korea built new ships like there was no tomorrow and, to move the iron, priced them near marginal cost.

Then, even more yield hungry capital hooked-up with the growing surplus of these “new builds”, funding on high leverage what is ultimately a day rate commodity (i.e. shipping capacity).

Even then, the daisy chain was not done. The bank arrangers and other intermediaries who bought and financed the surplus ships that the central bankers indirectly built needed to enhance their own returns. So they funded their newly acquired “assets” with yield-bait like the Bremen LB contingent bonds which blew sky high earlier today.

The one thing that is absolutely true in a $300 trillion global financial market is that Bremen LB is not a one-off. After a $20 trillion central bank printing spree and 90 months on the zero bound these kind of FEDs exist in their tens of thousands.

Soon we will know their names. Their fiery demise is what central banks ultimately do.

Two defences of the penalization of prudence, as a response to the current economic circumstances, have been published in the last couple of days….