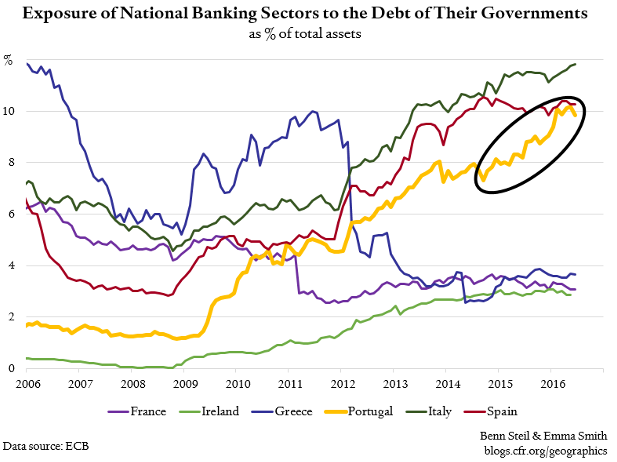 Italian banks have taken a pounding of late from the ECB, the markets, and the media.  They currently hold a whopping €360 billion in nonperforming loans (18 percent of their portfolio), the most in the European Union and double that of the next worst performer—Spain.

As shown in the graphic above, Italy is also the worst performer among major EU nations along another metric of banking-sector fragility—the dreaded “doom loop” of indebted banks and sovereigns.

A doom loop is set in motion when banks load up on debt issued by their government, and the government in turn guarantees, explicitly or implicitly, the debt of the banks.  As banks’ balance sheets weaken with rising bad loans, this impairs the fiscal position of the government backstopping their debt.  And as the government’s fiscal position deteriorates the loss exposure of the banks holding its debt rises.  Thus do weak banks drag down weak sovereigns, which in turn further weighs on the banks—ad infinitum.

The graphic also shows that Portugal’s doom loop metric has soared over the past two years.  Portuguese banks have been gorging on Portuguese sovereign debt, taking it from 7 percent of total assets to 10 percent—the same level as Spain.  If they continuing loading up at this pace, they will reach Italian levels by 2018.

This is worrying because Portugal has a government debt-to-GDP ratio of 129 percent (just below Italy’s 136 percent) and is set to fall short of its deficit target for a third year running.  Spain, with debt to GDP at 101 percent, will fall short for the 9th straight year. And slowing growth means that current budget projections may prove overoptimistic yet again, leading to ratings downgrades.

What does this mean from a practical perspective?  Well, we calculate that a 15 percent fall in the bond prices of their respective sovereigns would erase 35 percent of Italian bank capital, 22 percent of Portuguese bank capital, and 18 percent of Spanish bank capital.  This would fuel already heightened tensions with the EU over new bailout restrictions and revive speculation of a Eurozone break-up.

“What we’ve got here is a failure to communicate.” This became an often-repeated popular line after its use in the 1967 movie Cool Hand Luke….