One year ago we showed the following chart to explain the relative strong dollar that was on everyone’s mind at the time. With a second leg higher in the US dollar imminent, this particular chart will be more important than ever. Claims to dollars, such as demand and time deposits, or even more opaque money-like products created by the shadow banking system is just that, a claim or derivative on the final mean of payment, namely base money. When trust breaks down and owners of dollar claims rush to exchange them for actual dollars, the price of dollars goes up in relation to goods and services because there are not enough dollars to satisfy all the claims outstanding. In monetary terms deflation takes hold and there are no market mechanism that can clear this anomaly (because it was never a proper market to begin with) as the price of the underlying and the derivative will move in perfect proportion to each other. In enter the Federal Reserve with their QE programs, id est base money creation, to meet dollar demand and stem the ensuing panic.

Unfortunately, something even more sinister has been going on with dollar derivatives internationally. In addition to domestic claims to dollars, there are a massive market for dollars internationally called Eurodollars. Foreign banks, particularly European banks, help global investors, merchants, exporters and importers trade and settle in USD, with very few actual dollars present. As long as everybody trust each other, this highly efficient system can operate smoothly with a high degree of leverage. Money market funds and filthy rich commodity exporters have a long tradition for placing their money in these markets allowing the financial system to benefit greatly. 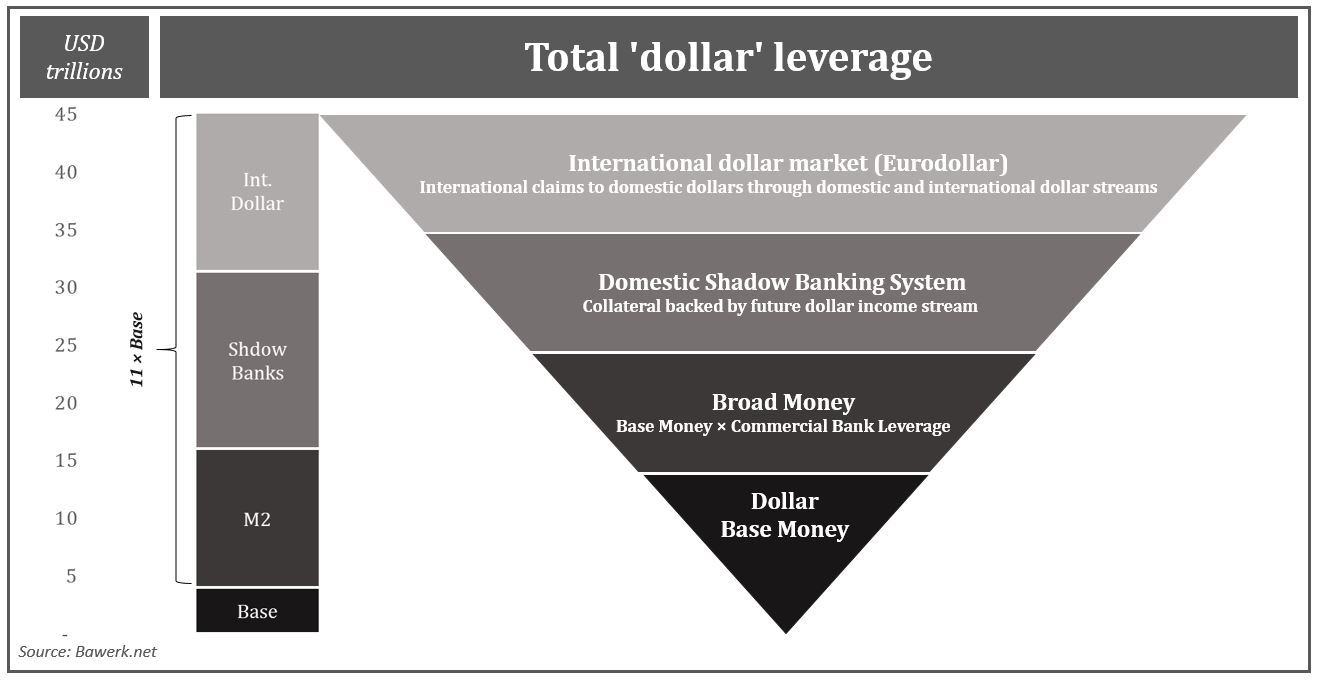 In every over-leveraged system, small changes can have great ripple effects. Money market reform fully implemented last week forced money markets to float their NAV and implement liquidity fees and suspension gates as means to prevent a run on the fund; unless these are invested in government securities of course. If they do, the new rules do not apply. Therefore, it is of no surprise that money has rushed out en masse from prime funds and subsequently into government money market funds. Implementation of the new rules happened just as oil exporters from the Middle East and other SWFs had to pull out from money markets to fund rapidly rising twin deficits. The result has been a notably increase in the TED spread, signalling scarcity in available dollar funding internationally. Troubled banks, like Deutsche Bank and the rest of its brethren in Europe, undercapitalized, burdened by an overzealous DoJ with a “you-tax-Apple-we-take-down-your-banks” attitude and funded mostly by AT1 CoCo bonds have felt the effects of higher funding costs more than any. A scramble for dollars are likely to ensue when one of the European behemoths fall. 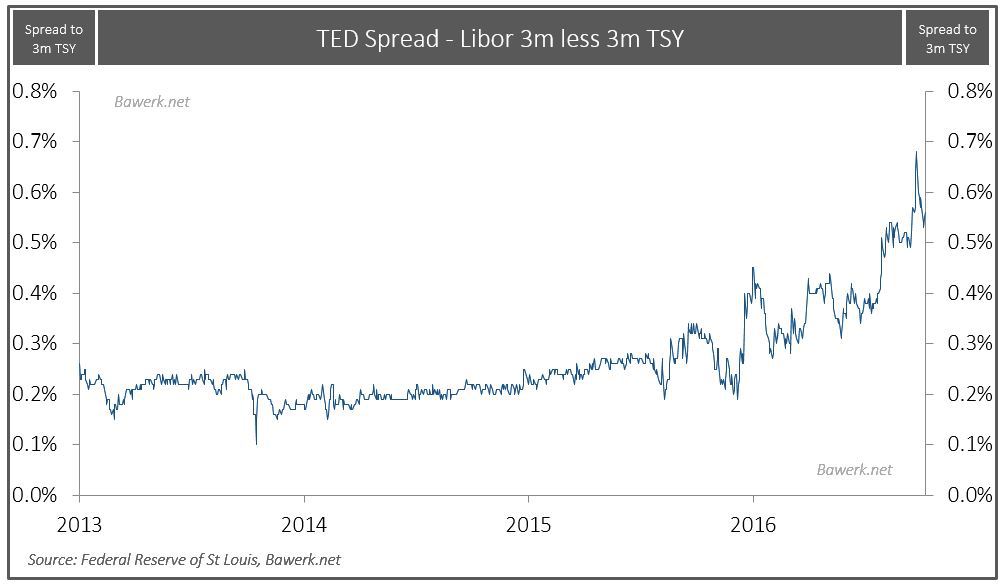 The USD is coincidentally perfectly positioned for a breakout from an increasingly narrow channel. Last year, in November of 2015 it broke out from a similar channel on back of rational asset allocation based on the upcoming Federal Reserve rate hike in December of that year. Further four hikes were communicated in 2016, but so far none as materialized. The USD thus fell back into a new channel. This time it will be pushed up, not from rational expectations of more favorable yield differentials, but from fear as dollar scarcity increases.  The Fed may or may not raise rate in December, we do not care much as the US is heading straight into recession (as we have warned here several times) and that is when the stampede will begin in earnest. 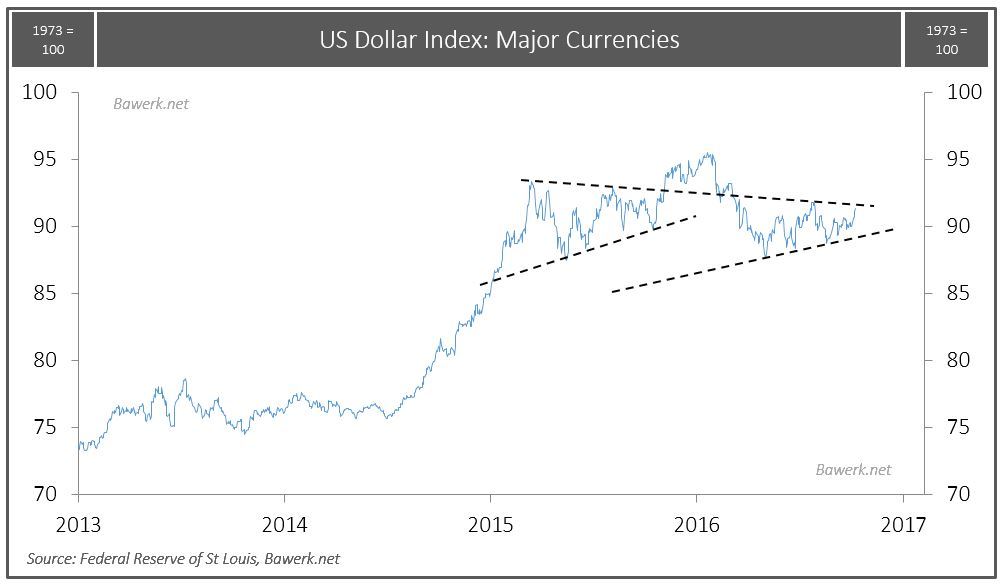 A massively overleveraged financial system is once again on the brink. All it take is a second leg higher in the USD and European banking is dead in the water with monstrosities like Deutsche Bank being one of the most interconnected institutions on the planet. Knock-on effects on the global economy will be severe as dollar funding dries up. The USD SWAP line between ECB and the Federal Reserve will quickly reach a trillion dollars and the newly elected US Congress will throw hissy-fits as they are essentially asked to bail out the international Eurodollar market.

Political risk in Europe are on the rise as the once prosperous middle class are forgotten, both financially (cannot compete with low cost Chinese workers) and culturally (if you do not like what is happening to your neighborhood you are a deplorable and irredeemable racist bigot and we do not need to listen to you). Losing life savings as deposits are bailed in left and right will be the straw that bring down any pretense of political correctness.

A good article from Robert Jackson Smith: Some legislators in the Commonwealth of Virginia are worried about hyperinflation!  See House Joint Resolution No. 557….