As we reported first thing this morning, one of the burning questions troubling Wall Street at this moment, is whether president elect Donald Trump plans on reshuffling the Fed, eliminating its so-called “independent” and perhaps going so far as firing or “requesting” Janet Yellen’s resignation.

To be sure, there has been sufficient animosity between Trump and the Fed chair: recall that in early September, Trump accusedthe Fed of “keeping the rates artificially low so the economy doesn’t go down so that Obama can say that he did a good job. They’re keeping the rates artificially low so that Obama can go out and play golf in January and say that he did a good job. It’s a very false economy. We have a bad economy, everybody understands that but it’s a false economy. The only reason the rates are low is so that he can leave office and he can say, ‘See I told you.'”

Trump’s allegation made it all the way to the September FOMC meeting during which Hilsenrath asked if it is true that the Fed is keeping interest rates intentionally low for the Obama administration. Yellen responded as follows: “I can say emphatically that partisan politics plays no role in our decisions about the appropriate stance of monetary policy. We are trying to decide what the best policy is to foster price stability and maximum employment and to manage the variety of risks that we see is affecting the outlook. We do not discuss politics at our meetings and we do not take politics into account in our decisions.”

Additionally, on several occasions Trump has hinted – if not outright stated – that Yellen should resign. Which is why, as we noted in our earlier post this morning, both JPM and Goldman Sachs had to chime in and address the question, with both major banks suggesting that Yellen would easily coast through the end of her term, if not longer.

Yet this latent question appears to have struck a chord, and prompted the WSJ to seek an answer, which it found when as it reported moments ago, an economic adviser to Donald Trump said Wednesday the president-elect isn’t seeking Federal Reserve Chairwoman Janet Yellen’s resignation, despite a swirl of speculation in recent weeks that he might pressure the central bank leader to step down.

“He’s not urging her to resign at all,” Judy Shelton, an economist and senior fellow at the Atlas Network who advises Mr. Trump on monetary policy, told The Wall Street Journal. As noted previously, Janet Yellen’s term as chairwoman expires in February, 2018.

However, while Trump won’t seen her premature departure, Shelton suggested Trump wouldn’t nominate Ms. Yellen to a second term, and instead would name someone else to take the helm. 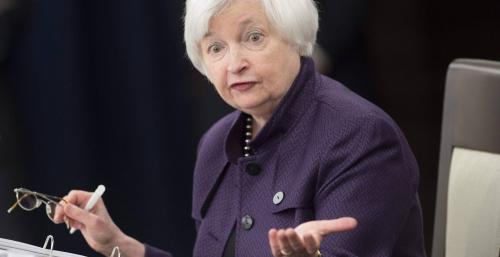 Paraphrasing Mr. Trump’s comments, Ms. Shelton said, “He’s saying he’d want someone whose thinking is more in keeping with his own.”

Someone whose name, we can only hope, is James Grant – the only person who in our opinion is qualified to run the Fed – because if Trump can fix the Federal Reserve then we will gladly forgive him any and all other transgressions.

One of the basic concepts taught in first-year university economics classes around the world is the intuitively powerful though regularly abused ‘multiplier effect’. The…