Trump’s plan is what Keynes would have prescribed

Most economic commentators such as a Nobel Laureate Paul Krugman should be delighted with the US President Elect Donald Trump’s economic plan for it is going to be along the lines of the Keynesian economics.

One of Trump’s promises is a massive infrastructure spending program. According to Trump,

“We are going to fix our inner cities and rebuild our highways, bridges, tunnels, airports, schools, hospitals. We’re going to rebuild our infrastructure, which will become, by the way, second to none. And we will put millions of our people to work as we rebuild it.”

Mr. Trump has said at one point in the campaign that he would double the $275 billion infrastructure plan that Hillary Clinton proposed. According to Trump’s plan he is also promising to create 25 million jobs over 10 years.

Trump has also promised tax cuts for all Americans. His plan includes lowering the rate on the highest earners from its current 39.6 percent to 33 percent and also lowering the corporate income tax rate from 35 percent to 15 percent.

Various estimates have put the cost of his tax cuts at some $6 trillion over 10 years. In addition to this Trump has also promised to boost U.S. military spending.

This is quite disappointing given Mr. Trump’s business credentials one would suppose he would understand the meaning of profitable versus non-profitable activities.

The plan is likely to boost the money supply growth rate

Following the popular way of thinking, the President-elect seems to be concerned with weak demand that the government and the central bank should focus on strengthening.

We suggest that it is quite possible that Trump’s loose fiscal policyislikely to strengthen the pace of monetary pumping by lifting the government borrowings, which ultimately is going to be monetized by the US central bank.

Observe that the yearly growth rate of our monetary measure AMS is already at a lofty level standing at over 16% at the end of October- the highest since 1990. Note that in October last year the growth rate stood at 3.5%. 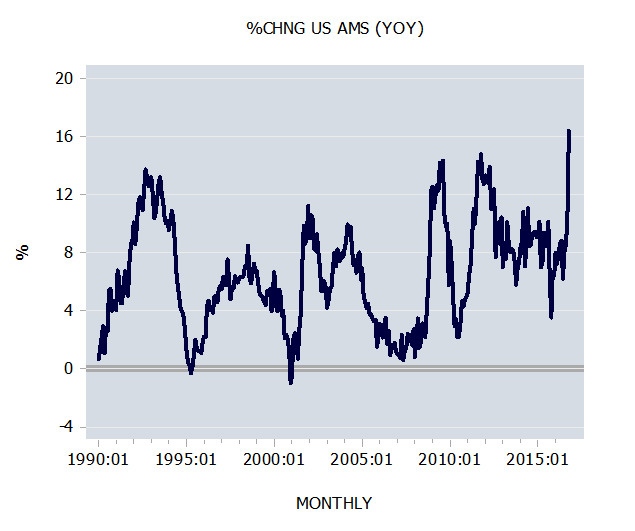 The pool of real wealth and Trump’s plan

Remember to activate any government plan or any investment plan real wealth must be allocated for this. So if during the execution of a plan the current infrastructure doesn’t generate an adequate flow of final goods and services the plan would have to be aborted.

Any attempt to go ahead with the plan will lead to an economic impoverishment.(Because the part of the pool of real wealth is going to be absorbed by various non wealth generating activities, whilst the current infrastructure doesn’t adequately compensates for this, as a result this is going to put pressure on the overall pool of real wealth thereby weakening economic growth).

Why the pool of real wealth could be in trouble

We suspect that prolonged reckless monetary policiesof the US central bank, such as aggressive monetary pumping andnear zero interest rates, has likely severely curtailed the private sector’s ability to generate wealth.(Remember that loose monetary policies lead to an exchange of nothing for something).

The removal of the link between the US dollar and gold in 1968, has given the US central bank the freedom to engage in unrestrained money printing – strengthened the process of the erosion of the pool of real wealth. This attrition was further intensified with the onset of financial deregulations in early 1980’s, which strengthened commercial banks lending out of “thin air”.

A further damage to the pool of real wealth emerged during 2008 with the introduction of quantitative easing by the then Fed Chairman Ben Bernanke to “prevent” the so called economic depression.

It is quite possiblethat the pool of real wealth is currently stagnating. Hence any additional burden on the pool from massive fiscal spending could push it onto a declining trajectory.

In this scenario banks are likely to curtail their lending. This could lead to an economic collapse and in fact to price deflation.

A collapse in the monetary liquidity could force businesses to try to stave off insolvency and sell off their most liquid assets such as Treasuries thus pushing the yields sharply up. Also, the price of gold could come under pressure since most people are likely to chase cash by selling gold to prevent insolvency.

If, on the contrary, the pool of real wealth is still expanding then Trump’s loose fiscal policy and strong increases in money supply could temporarily boost “bubble” activities, price inflation and inflation expectations. This would also push temporarily interest rates higher.

We suggest that the artificial boost in so called economic activity as depicted by GDP and various other economic indicators is unlikely to last for too long. After a brief period a burst in bubble activities and price deflation is likely to ensue.

Mr. Trump has the opportunity to strengthen the pool of real wealth

Given that the Republicans are now in charge of both Houses, the US President-elect Trump now has the opportunity to activate policies that are likely to strengthen the process of real wealth generation.

This means to seal off all the loopholes for money creation out of “thin air” and cutting aggressively the size of the government.

This would require imposing strict controls on the ability of the Fed to expand its balance sheet and curtailing banks ability to expand lending out of “thin air” via the fractional reserve banking.

All this coupled with a small government is likely to leave more real wealth in the hands of wealth generators thus permitting a rapid buildup in the pool of real wealth – the engine of economic growth.

Why profit is the key and not a hindrance to economic growth?

There is no doubt that fixing roads and building bridges is necessary – but is it affordable? If the pool of real wealth is stagnating or perhaps on the verge of declining then such policies could be disastrous as we have shown above.

Some commentators suggest that we need more government fiscal stimulus now because the private sector will not undertake the building of roads and bridges. They blame the private sector on focusing solely on the aspect of profit and ignoring the well being of the nation.

Note that the profit and loss framework is just an indicator as it were – it guides businesses towards the conduct that corresponds to people’s dictate.

In this sense ignoring this framework implies following the wishes of bureaucrats in disregard to people’s wishes, which runs contrary to the spirit of what the democratic process is all about.

Hence labeling businesses that striveto secure profits as heartless and greedy is missing the point.

Allowing the market to do the allocation of resources always leads to better results. Even the founder of the Soviet Union, Vladimir Lenin, understood this when he introduced the market mechanism (NEP –New Economic Policy) for a brief period in March 1921 to restore the supply of goods and prevent economic catastrophe.

Yet for some strange reason, most experts these days cling to the view that the market cannot be trusted in difficult times.

We can only suggest that what the US requires now is less Keynesian loose fiscal policies and more of a free market orientation in order to set healthy foundations for economic growth.

We hold that Donald Trump has the opportunity to implement the so called least “popular” policies that might be painful in the short term. This will lay the foundations for real economic growth by allowing the wealth generating process to repair itself-and benefit all the citizens in the long run.

Effect of changes in money supply on economic activity and prices is a velocity of money.   It is alleged that when the velocity…