Inventories in the fourth quarter rebounded rather sharply, at least in terms of how inventory is calculated as a contribution to GDP. The GDP version of inventory turned negative in Q2, and was only slightly positive in Q3. In the final quarter of 2016, however, the total change is preliminarily estimated to have been $51.1 billion. That isn’t quite back to the high levels of additions that had become common up to 2015, but to get so close to that again with inventory still high by almost any relative measure (including many not related to GDP) raises questions.

Inventory and recession are practically synonymous, as the former plays a huge role in determining the latter. For much of US economic history, marginal excess production was both recession and recovery; the enormous pressure to drawdown in the former, and the sudden and often intense rush to restock in the latter. Alan Greenspan and the monetary policy of interest rate targeting have taken credit for the smoothing out the business cycle since the 1980’s, but it is far more likely that changes in inventory management and tracking (just in time) were as much if not more responsible for at least the appearance of greater economic stability.

As such, as you would expect, inventory closely tracks sales. For individual businesses, excess product is an enormous burden in all terms, including financial. If customers start to thin out, spending less each time while also showing up less, the whole supply chain contracts like a coiled spring. At least it had until 2012. 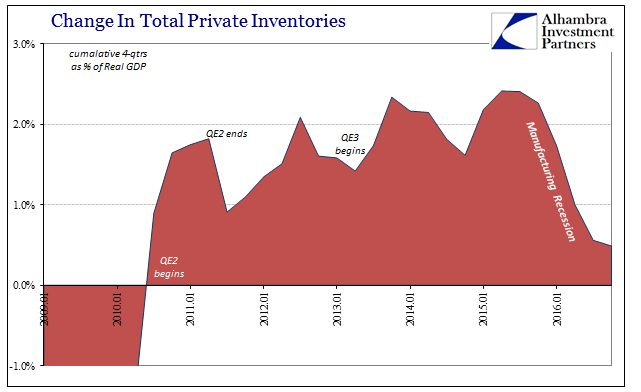 At first glance, the inventory buildup after the Great “Recession” appeared unremarkable. The drawdown of inventories during the contraction was enormous, due to both spending as well as difficulties in financing for everything including working capital; a true liquidation if there ever was one. It would not have been surprising, then, for inventory growth to be toward the high side and even extended in time (due in part to some initial caution on the part of businesses, that didn’t really start to restock until a year after the Great “Recession” ended) during the recovery. Once it got going, however, the runup of excess production was certainly robust, and lasting all the way into 2015 before it started to reverse. Though not producing an official recession this time, it was still more than enough to push GDP down such that it disproved QE and the very idea of recovery. 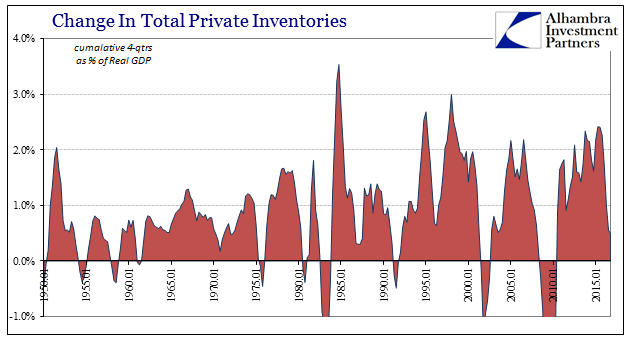 That might be true in more ways that just these numbers. The timing of the inventory reversal more than its intensity is what may ultimately have been the most important aspect. In all prior history, as noted above, spending and inventory shared a close relationship. In the GDP figures, as well as other data series, that broke down conspicuously in and after 2012: 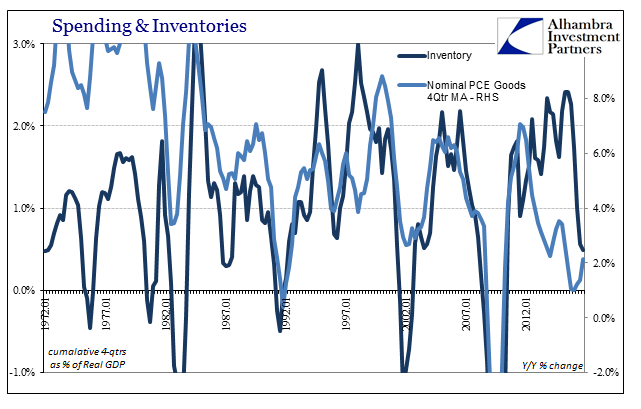 There were small and temporary divergences in the 1990’s, but nothing on this scale or to this extended length. What would cause, collectively, US businesses to continue adding to inventory when customer spending, collectively, had fallen off sharply and more importantly stayed lower for years? Because this was a three-year divergence, starting already three years after the economic trough, it couldn’t have been belated resumption of pre-crisis inventory levels. There must have been some other factor.

I think the difference was Alan Greenspan, or, more precisely, the myths built up around his tenure. In the form of Ben Bernanke, monetary policy was given an aura it never truly deserved. The Great “Moderation” looms over everything in the recent economic past, and by and large it has been attributed to the near omniscient abilities of the Federal Reserve. Nevermind the absurdities of the idea (starting with “moderation” itself), in conventional thinking that was how it was and that was what could be done especially if monetary authorities were ever pushed to do whatever it might take (pace Draghi).

In the aftermath of the Great “Recession” that was QE, the sudden and intense rush of what practically everyone thought was “money printing.” It would be by mainstream standards an act of courage to have bet against it, particularly where policymakers like Bernanke showed no special reluctance to doing it repeatedly if necessary. These sorts of unwashed expectations were not mere fantasy, but trickling down through official channels in the all-too-normal scientism formats that are commonplace when dealing with Economics. I wrote just about two years ago that:

You would expect a gap between inventory and sales in a “recovery” where sales levels are increasing rapidly, however I have to wonder how much of the current gap (dating back to early 2013) is due to artificial interference in companies projecting demand. I am speaking of course about QE and the perpetuity to which sunshine in forecasting is attached to it. Businesses make their pre-orders based on a number of factors, including current levels of demand, but they also take into account orthodox and mainstream projections about the economy (especially the ridiculous Blue Chip Economic Survey, which never met an economic condition it didn’t believe could be totally and permanently improved by monetary “stimulus”).

With inventories having now receded and more importantly when that recession started, I have to believe that was the correct interpretation. No matter how much the real economy actually and persistently slowed after 2011, mainstream projections always made that out to be temporary, especially after QE3 was introduced. Thus, businesses were ordering product for the economy that was just around the corner as told to them by their economists, whether inhouse or outsourced, all of whom based their projections on the same models used by central bankers – those that in every iteration showed, in sciency math, “stimulus” always works.

It was the most “real” expression for the economy that “should be” rather than the economy that actually was. In that respect, it would make perfect sense why in 2015 it just stopped. The early months of that year were where prediction and reality really started to drift apart, and often, in some industries, rapidly and alarmingly. Even if you wanted to still believe in the Blue Chip Economic Survey and its assurances that weakness was “transitory” (Yellen’s word for it), and the rest of 2015 eventually working out to be fine, you would start to hedge at least against the other possibility that was more and more apparent by the month. Remain overall optimistic, but order just a little less inventory just in case.

By the end of 2015, of course, there was very little left of those projections. Even when the FOMC “raised rates” that December for the first time in a decade, intentionally making a big deal out of it, there was a deer-in-headlights quality to it all that was resoundingly appreciated by everyone who could see that it was more or less one final stunt meant as much to preserve the idea of ‘transitory.”

Having only just started to re-align inventory with sales, are businesses now going to fall for it a second time (which really wouldn’t be a second time)? Are they going to be enticed and allured by the next big “stimulus” ideas, even with inventory levels still close upon historic highs? There is an underappreciated human element to all of this, one that monetary policy and QE expectations were predicated on perhaps more than anything else. We used to call it “recession fatigue” but it’s more than that; more like depression optimism, where after suffering so long without any real economic growth many people in business, as well as outside of it, might be forgiven for thinking that it just can’t go on any longer, and the next trick just has to work (especially if it is “different”).

The other side to that “reflation”, however, is how after each the economy overall is left that much further behind. By that I mean inventory levels weren’t much of an issue in 2013 when “reflation” last took hold, but they sure are now. Thus, the economy will have to work that much harder just to get back to even or zero before ever starting in truly forward fashion again. That makes it more likely the economy is tripped up before that point, or just never makes it that far even if there are real economic effects all over again, real as well as imagined. 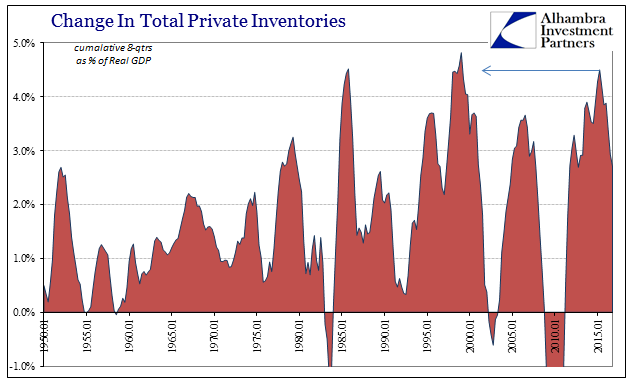 As with inventory, the economy after 2015 has that much bigger of a mountain to climb to truly get going. Without the contribution of that $51 billion in new inventory in Q4, real GDP would have been just 0.86%. That’s an exceedingly small platform for actual positive momentum and capacity with which to get started.

Contrary to the conventional wisdom of the current economic mainstream that the gold standard is but a quaint historical anachronism, there has been an…