Sugar, Honey, Honey – the weighty problem of obesity and substitution

In last week’s Spring Budget, UK Chancellor, Philip Hammond, introduced a Sugar Tax on fizzy drinks. He confirmed that the tax would be levied in two bands: one of 18p/L for drinks with 5 grams of sugar per 100ml; and a higher band of 24p/L for those containing more than 8g per 100ml. He went on to say that it would be unlikely to raise the initially expected level of revenue because the manufacturers were reducing the level of sugar in these products already in order to avoid the tax.

While this may sound like a success story in the fight against obesity it will fail due to substitution.

Obesity in the UK has been rising, as it has in other developed countries, since the end of WWII. According to an international study by the Institute for Health Metrics and Evaluation (IHME) 67% of men and 57% of women in the UK are overweight or obese. More worryingly the study found 26% of boys and 29% of girls fell into these categories, compared to 17.5% and 21% in 1980. The UK now has the third most obese population in Europe.

The chart below shows obesity rates for a selection of developed countries:- 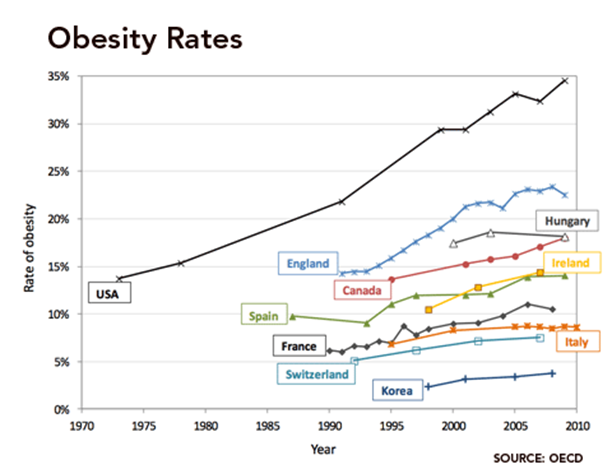 The cost to the tax payer of obesity has been growing. A sugar tax is not the answer.

The idea behind the proposed sugar tax is as follows:-

If there were no substitutes to sugar – and if sugar was the sole cause of obesity – this might work, but there are many substitutes. Obesity is caused by excessive calorie intake, whatever form it may take.

Aside from reducing obesity, other perceived benefits of imposing a sugar tax include: a reduction in the incidence of dental decay – better dental hygiene is probably a more effective solution – and a reduction in Type 2 Diabetes. Whilst Diabetes is treated by carefully managing the level of blood sugar, its cause is related, among other things, to excessive calorie intake rather than the consumption of any specific food group. Even Diabetes UK state:-

It is hard to over-consume lettuce or celery, whilst one can settle down in front of the TV and polish off a packet of chocolate digestives with alacrity. Nonetheless, there are many substitutes to sugar which will deliver sufficient calories to support weight gain.

It’s been tried before

The global obesity crisis prompted the introduction of sugar taxes – recent evidence from Mexico suggests that is does not work.

The British Medical Journal – Beverage purchases from stores in Mexico under the excise tax on sugar sweetened beverages: observational study – took place between January 2012 and December 2014. It observed an unbalanced panel of 6,253 households providing 205,112 observations in 53 cities with more than 50,000 inhabitants. The conclusions are interesting if unsurprising:-

These reductions became larger over time, while the purchases of untaxed beverages increased. This short term change is moderate but important, and it will be critical to continue monitoring purchases to note whether the trend continues or stabilizes; consumers substitute cheaper brands or untaxed foods and beverages for the taxed ones, or adjustments occur in the longer term. This will allow for an understanding of the long term effects of taxes on both sugar sweetened beverages and non-essential energy-dense food on purchases, diets, and ultimately health outcomes.

Substitution, in particular, renders the effectiveness of sugar taxes, as a promoter of lower sugar consumption, impotent.

A broader, alternative solution, is to tax sugar itself. The EU and Japan both operate protectionist policies in relation to sugar – although the EU quota system will finally be phased out in September 2017. The longest continuous example, of why a sugar tax does not work, is provided by the world’s weightiest nation – the US.

The US first imposed import tariffs on sugar in 1789. Between then and 1930, thirty different pieces of legislation related to sugar passed through Congress. It was, however, during the period of FDR’s New Deal in 1934, that sugar became seriously political, when the Jones-Costigan Amendment to the Agricultural Adjustment Act passed. In response to a Supreme Court ruling, that this legislation was unconstitutional, an unrepentant Congress passed the Sugar Act in 1937. It established import quotas and introduced a processing tax to compensate domestic sugar producers for curtailments in domestic production.

The objective of the US sugar program was then and is now, to increase the incomes of American sugar beet and sugarcane producers and processors, rather than weaning the American consumer of that sweet tooth. The program has utilized tariffs, import quotas, domestic processor marketing allotments, and a non-recourse loan program.

In addition to these measures the program has also sanctioned, payment-in-kind programs organised by the Commodity Credit Corporation which allowed farmers to destroy their crops. There have also been bilateral and multilateral trade agreements, such as the International Sugar Agreement. All of these measures were designed to raise US sugar prices. The Mises Institute – Making Sugar a Delicacy – takes up the story:-

In 1976, shortly after the introduction of high fructose corn syrup as a viable substitute, sugar prices should have eased with the expiration of the Sugar Act. Instead, Gerald Ford simply tripled the tariffs on sugar to curry favor with sugar farms before his re-election bid. When Jimmy Carter came into office, he followed in the footsteps of Franklin Roosevelt and opted to simply set up a payment program for the government to buy out excess sugar production, which has the predictable effect of raising the domestic price to whatever level the government is paying for excess quantities.

Under Reagan, import quotas were reinstated. With Clinton, Carter’s payment program set buyout rates at 18 cents per pound of sugar cane and 23 cents per pound of beet sugar. These prices keep the United States sugar prices at roughly double the global price today.

The chart below shows the relationship between US and Non-US sugar prices since 1980. On average the US pays twice as much to satiate its sweet tooth:- 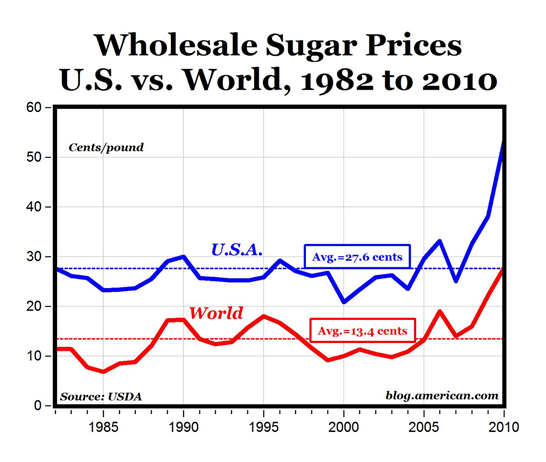 Meanwhile sugar consumption and obesity have diverged, as this chart from the US Department of Agriculture shows:- 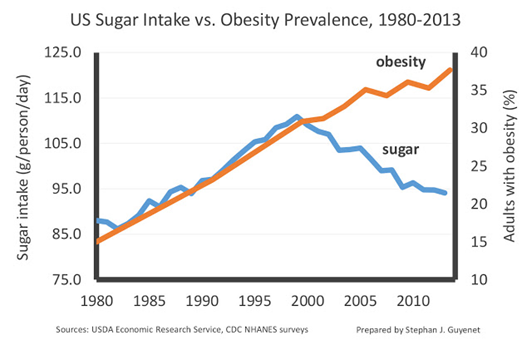 The chart below shows a breakdown of the consumption of different types of sugar – HFCS stands for high fructose corn syrup, which is not subject to the same level of tax as sucrose: itself a minor example of the substitution effect. The World Health Organisation has recently highlighted the risks associated with HFCS and advocates higher taxation:- 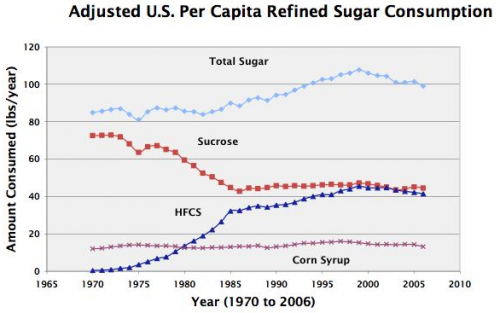 This general decline in sugar consumption since 2000 might lead one to suspect that substitution may be taking place with other forms of carbohydrate. The chart below refutes that theory:- 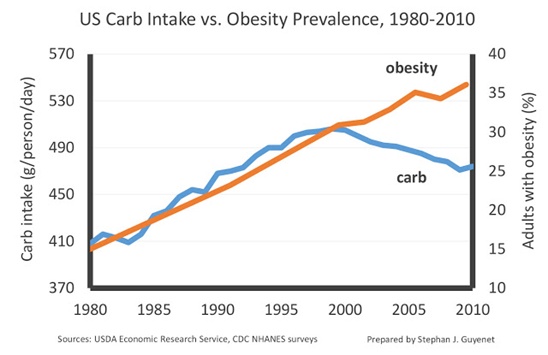 In a quest to discover the source of rising obesity this chart may be a more useful guide:- 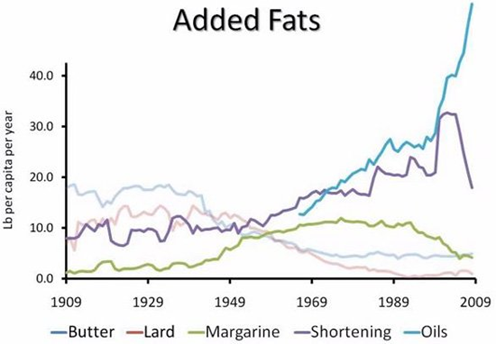 The data for per capita oil consumption appears to correlate with the increase in calorie consumption from the 1970’s onwards:- 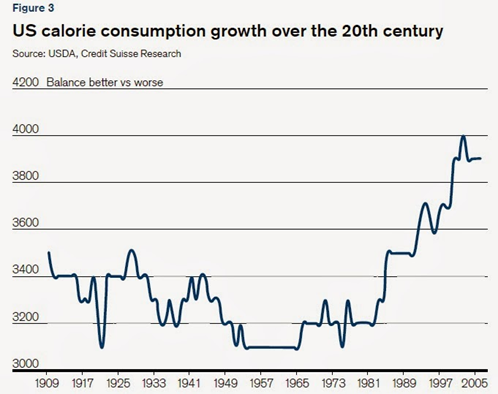 UK sugar consumption per capita is shown below. It appears to have begun to decline as early as the 1970’s:-

A calorie consumption tax would still be problematic. Some foods are healthier than others – yet most people prefer meat or fish to lentils. The best solution, rationing, would have profound political side-effects.

Food rationing, in the UK, lasted from 8th January 1940 until 4th July 1954. Almost all foods, apart from vegetables and bread, were rationed as early as August 1942. The chart below covers the period from 1930 to 2000. The author of the article – Body Weight and Self-Control in the United States and Britain since the 1950s which accompanies this chart, observed that the average UK Body Mass Index (BMI) rose approximately two BMI points between 1900 and 1930:- 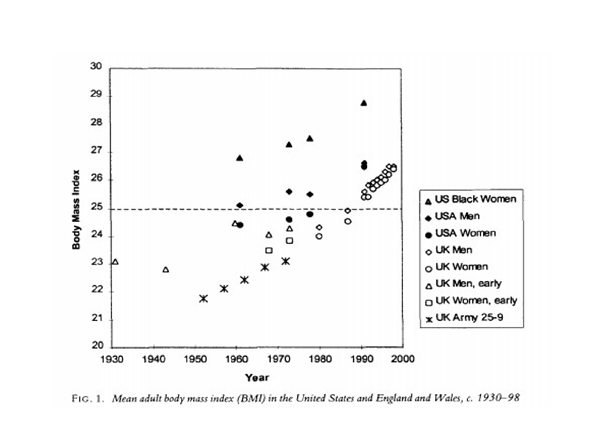 Source: Anver Offer – The Society for the Social History of Medicine

Rationing, during the 1940 to 1954 period, tempered the rise, but the end of rationing led to an abrupt jump in BMI during the six years to 1960.

The Labour party managed to win the 1950 election, with a substantially reduced majority, and lost the 1953 election, primarily due to their support for continued, indefinite, rationing. It is extraordinary, despite the financial devastation that WWII had on the UK economy, that rationing should have continued longer during the subsequent peace than during the duration of the war.

Any attempt to impose rationing during peace-time is likely to ferment serious civil unrest – it would be political suicide equivalent to the “poll-tax plus, plus, plus”. There are several targeted solutions which might be adopted to address the problem of obesity. Here are a few carrots and a stick the nanny state might contemplate:-

Weighing it all up

The problem with obesity is one of excessive calorific intake rather than sugar consumption per se. By targeting sugar in isolation the authorities drive consumers towards inferior goods or substitutes. The imposition of such a tax is “negatively-redistributive” since it will fall more heavily on those with lower incomes. There are more effective ways of encouraging a change in the behaviour of the overweight and obese. If the purpose of imposing this tax is solely to raise revenue there are less discriminatory and more effective solutions. That obesity continues to rise whilst sugar consumption falls suggests that the problem lies elsewhere. The government has a great tradition, as the illustrations below document, of taxing the wrong commodity: they should learn, from past mistakes, that the repercussions of a poorly conceived tax can be severe. 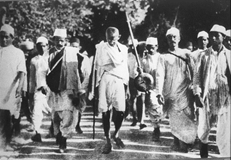 One reply on “Sugar, Honey, Honey – the weighty problem of obesity and substitution”