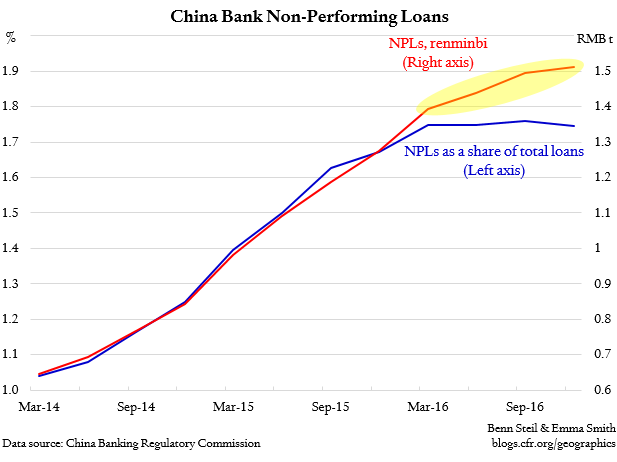 In a recent speech at Bloomberg’s headquarters in New York, People’s Bank of China Deputy Governor Yi Gang reassured his audience on the level of non-performing loans (NPLs) in the Chinese banking sector.  It had, he said, “pretty much stabilized after a long period of climbing.  That’s a good development in the financial market.”

Yi was referring to NPLs as a share of total loans, which, as shown in the figure above, have stabilized over the past year.  But this is misleading.  NPLs have actually continued to grow—by RMB 238 billion ($35 billion) in 2016, reaching a total of RMB 1.5 trillion ($220 billion).  The reason the NPL ratio has stabilized is that Chinese banks have extended more loans, boosting the denominator—not because they have reduced their exposure to bad loans.

On Tuesday, I spoke at the IEA’s The State of the Economy conference, participating in a panel discussion on Fiscal Policy and Government Expenditure…