During her testimony this morning, Fed Chair Janet Yellen urged Congress to take into account the growth trajectory of the federal debt when making decisions about spending and taxation.

She said lawmakers need to work toward achieving “sustainability of this debt path over time,” …

“Let me state in the strongest possible terms that I agree” the U.S. federal debt trend is unsustainable, may hurt productivity, and living standards of Americans.

Of course she is correct, but we do not remember her being so forthright during the last few years of President Obama’s reign as he doubled the national debt?

As a reminder, the Congressional Budget Office estimated last month the national debt could reach 91% of gross domestic product by 2027. Lawmakers are weighing major fiscal policy changes, including tax cuts, changes to health care and infrastructure spending, that could drive deficits higher in the coming years. Furthermore, at the cuirrent spending/taxation rates, debt/GDP expected to hit 150% by 2047 if the current government spending picture remains unchanged. 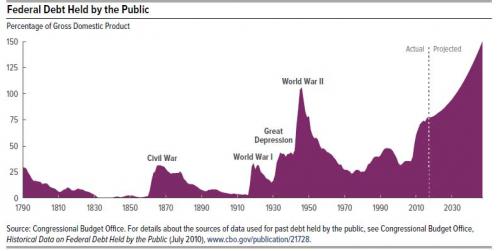 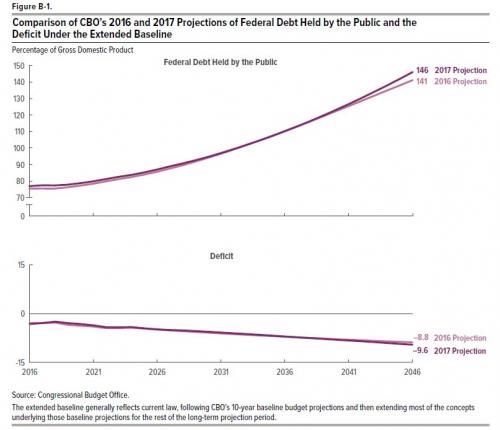 According to the CBO, “at 77 percent of gross domestic product (GDP), federal debt held by the public is now at its highest level since shortly after World War II. If current laws generally remained unchanged, the Congressional Budget Office projects, growing budget deficits would boost that debt sharply over the next 30 years; it would reach 150 percent of GDP in 2047.“

A comaprison of government spending and revenues in 2017 vs 2047 shows the following picture: 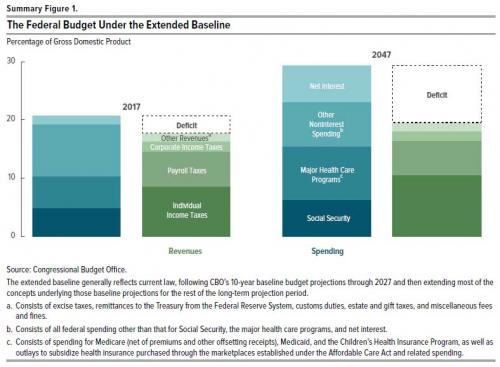 The CBO also mentions rising rates as another key reason for the increasing debt burden. The Federal Reserve has kept rates low since the financial crisis but is on track to gradually hike rates in the coming year.

On the growth side, the CBO expects 2% or less GDP growth over the next three decades, far below the number proposed by the Trump administration. 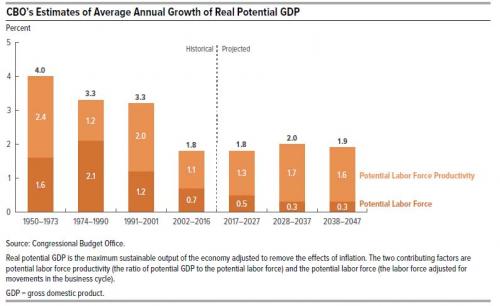 The budget office breaks down the primary causes of projected growth in US spending as follows: not surprisingly, it is all about unsustainable social security and health care program outlays. 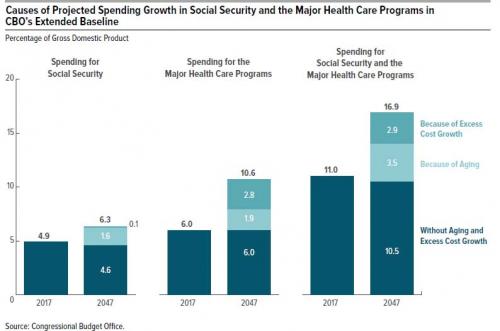 Greater Chance of a Fiscal Crisis. A large and continuously growing federal debt would increase the chance of a fiscal crisis in the United States. Specifically, investors might become less willing to finance federal borrowing unless they were compensated with high returns. If so, interest rates on federal debt would rise abruptly, dramatically increasing the cost of government borrowing. That increase would reduce the market value of outstanding government securities, and investors could lose money. The resulting losses for mutual funds, pension funds, insurance companies, banks, and other holders of government debt might be large enough to cause some financial institutions to fail, creating a fiscal crisis. An additional result would be a higher cost for private-sector borrowing because uncertainty about the government’s responses could reduce confidence in the viability of private-sector enterprises.

It is impossible for anyone to accurately predict whether or when such a fiscal crisis might occur in the United States. In particular, the debt-to-GDP ratio has no identifiable tipping point to indicate that a crisis is likely or imminent. All else being equal, however, the larger a government’s debt, the greater the risk of a fiscal crisis.

The likelihood of such a crisis also depends on conditions in the economy. If investors expect continued growth, they are generally less concerned about the government’s debt burden. Conversely, substantial debt can reinforce more generalized concern about an economy. Thus, fiscal crises around the world often have begun during recessions and, in turn, have exacerbated them.

If a fiscal crisis occurred in the United States, policymakers would have only limited—and unattractive—options for responding. The government would need to undertake some combination of three approaches: restructure the debt (that is, seek to modify the contractual terms of existing obligations), use monetary policy to raise inflation above expectations, or adopt large and abrupt spending cuts or tax increases.

Then again, as the past 8 years have shown, only debt cures more debt, so expect nothing to change.

Also, we find it just a little confusing why the CBO never warned of an imminent “fiscal crisis” over the past 8 years when total US debt doubled, increasing by $10 trillion under the previous administration.