The European Central Bank will increase the overall volume of its bond purchase program to 2.550.000.000.000 euros by September 2018. The main refinancing rate will remain at zero. Mario Draghi has stressed that this policy shall continue until inflation picks up sustainably (which is unlikely to happen in the foreseeable future). The works of Friedrich August von Hayek (1931, 1944, 1976) help to explain why the tremendous monetary expansion is increasingly causing growing economic and political instability in Europe.

Hayek’s (1931) Production and Prices explains boom and bust with central bank mistakes. During the upswing, the central bank keeps the interest rate too low. Investment projects with comparatively low marginal efficiency are launched, financed by credit creation of the banking sector. Share prices hike, because profit opportunities of enterprises and banks increase, while deposit rates are low. Wages do not rise as long as idle capacities in the labor market exist. As soon as wages start to rise, enterprises lift prices and inflation picks up. When the central bank increases the interest rate to contain inflation, investment projects with low marginal efficiency have to be dismantled. The boom turns into bust. The central bank aggravates the recession by keeping the interest rate too high.

To understand the economic development of the industrialized countries since the mid 1980s Hayek (1931) is important, but two modifications have to be made (Schnabl 2016). In line with Hayek, central banks around the globe have tended to keep interest rates too low during upswings, thereby causing exuberant booms. In contrast to Hayek’s theory, they cut interest rates fast during crisis to avoid painful recessions. In addition, increasingly expansionary monetary policies became visible in rising asset rather than goods prices (see Figure). Therefore, interest rates could converge towards zero and central bank balance sheet could be inflated without inflation targeting central banks being forced to tighten monetary policy.

The increasingly expansionary monetary policies have two important negative side effects. First, productivity increases have become paralyzed, as low-return investment projects were encouraged during booms and are kept alive during recessions. Today zombie banks—which rely on the low-cost liquidity provision of central banks—prolong credits to unprofitable zombie enterprises to prevent bad loans from showing up in their balance sheets. The negative effect of such a hidden nationalization of banks and enterprises on productivity gains and growth are well described in Hayek’s (1944) Road to Serfdom.

Development of Consumer and Share Prices in G4 Countries 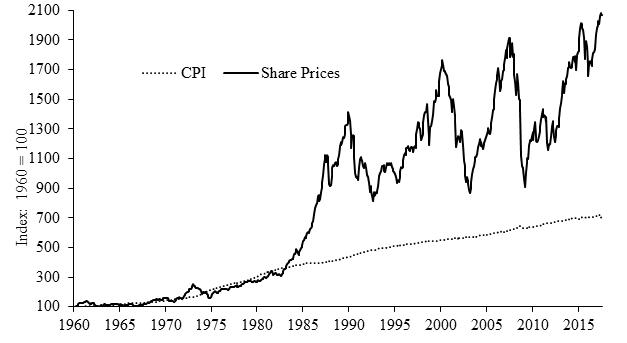 Source: IMF and OECD. Arithmetic averages for the US, UK, Japan and Germany. After 1999 the CPI for the euro area replaces Germany.

Second, there are adverse redistribution effects. As the liquidity issued by central banks is first transferred to financial institutions, they can profit first from fast rising asset prices. Also, the wealth of rich people grows, as they hold the major share of stocks and real estate. In contrast, the interest rate on the bank deposits of the middle class is nudged towards zero.

As the ultra-expansionary monetary policies depress the spread between lending and deposit rates, the traditional lending business of commercial banks is undermined, leading to a concentration of economic activity in large entities. Banks are forced to redirect their business towards investment banking, where scale effects clearly work in favor of large financial institutions. Small and medium banks get into financial trouble and merge. As the small and medium banks are forced to tighten credit because of low profitability, the financing conditions for small and mediums enterprises deteriorate. In contrast, large enterprises have direct access to capital markets, where they can raise funds at historically low interest rates. Often, these funds are used to take over smaller competitors.

If the large enterprises and financial institutions are clustered in specific regions, regional economic activity becomes concentrated as well. Regions with only small and medium enterprises shrink, with young people being forced to migrate to the economic centers. There, they will tend to find only low-paid jobs (compared to former generations), as the fading productivity gains have eroded the basis for real wage increases. They cannot buy a home for their families, as central banks continue to push up real estate prices.

Hayek (1976) has argued in Law, Legislation and Liberty that the granting of privileges to specific groups of the society is regarded as unjust by the citizens. This is in particular the case, when low growth prevents the compensation of the unprivileged groups. This is the reason why frustration and political instability are growing all over Europe (and beyond). Because political stability is a precious good, central bankers around the world should terminate the excessive monetary expansion better today than tomorrow. The Fed and the Bank of England have already taken the lead. The others should follow!

Since The Cobden Centre was established by original founder Toby Baxendale, Dr Tim Evans, Dr Anthony J Evans and the author, we have assembled…