Chinese 10yr bond yields have been rising steadily since October 2016. They never reached the low or negative levels of Japan or Germany. 1yr bonds bottomed earlier at 1.76% in June 2015 having tested 1% back in 2009.

The pattern and path of Chinese rates is quite different from that of US Treasuries. Last month rates increased to their highest since 2014 and the Shanghai Composite index finally appears to have taken notice. The divergence, however, between Shanghai stocks and those of the US is worth investigating more closely.

The chart below shows the yield on 10yr Chinese Government Bonds since 2007 (LHS) and the 3 month inter-bank deposit rate over the same period (RHS):-

From a recent peak in 2014, yields declined steadily until October 2016, since when they have begun to rise quite sharply.

The next chart shows the change in yield of Government bonds and AAA Corporate bonds across the entire yeild curve:- 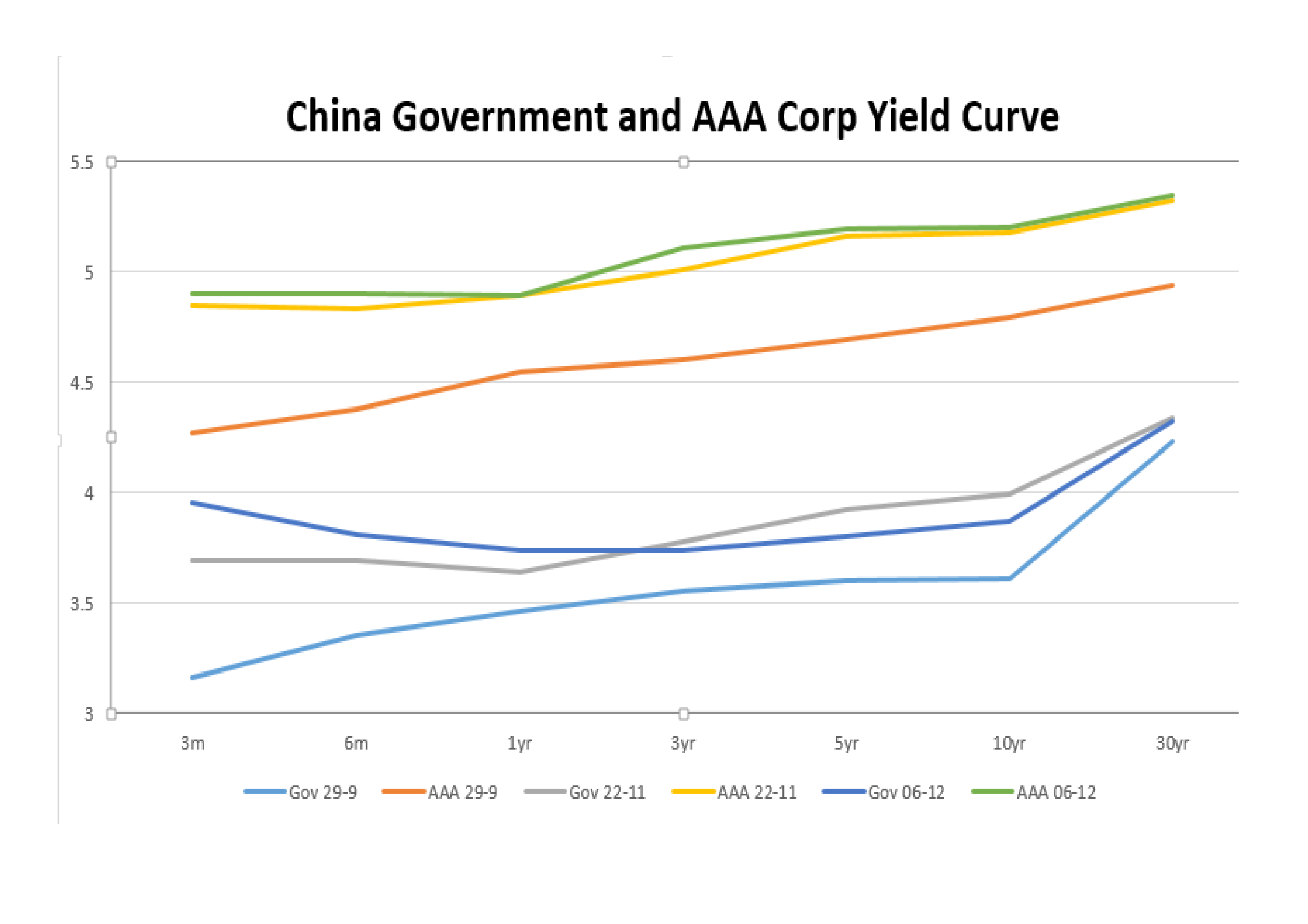 The general observation is simply that yields have risen across the maturity spectrum, but the next chart, showing the change in the spread between government and corporate paper reveals some additional nuances:- 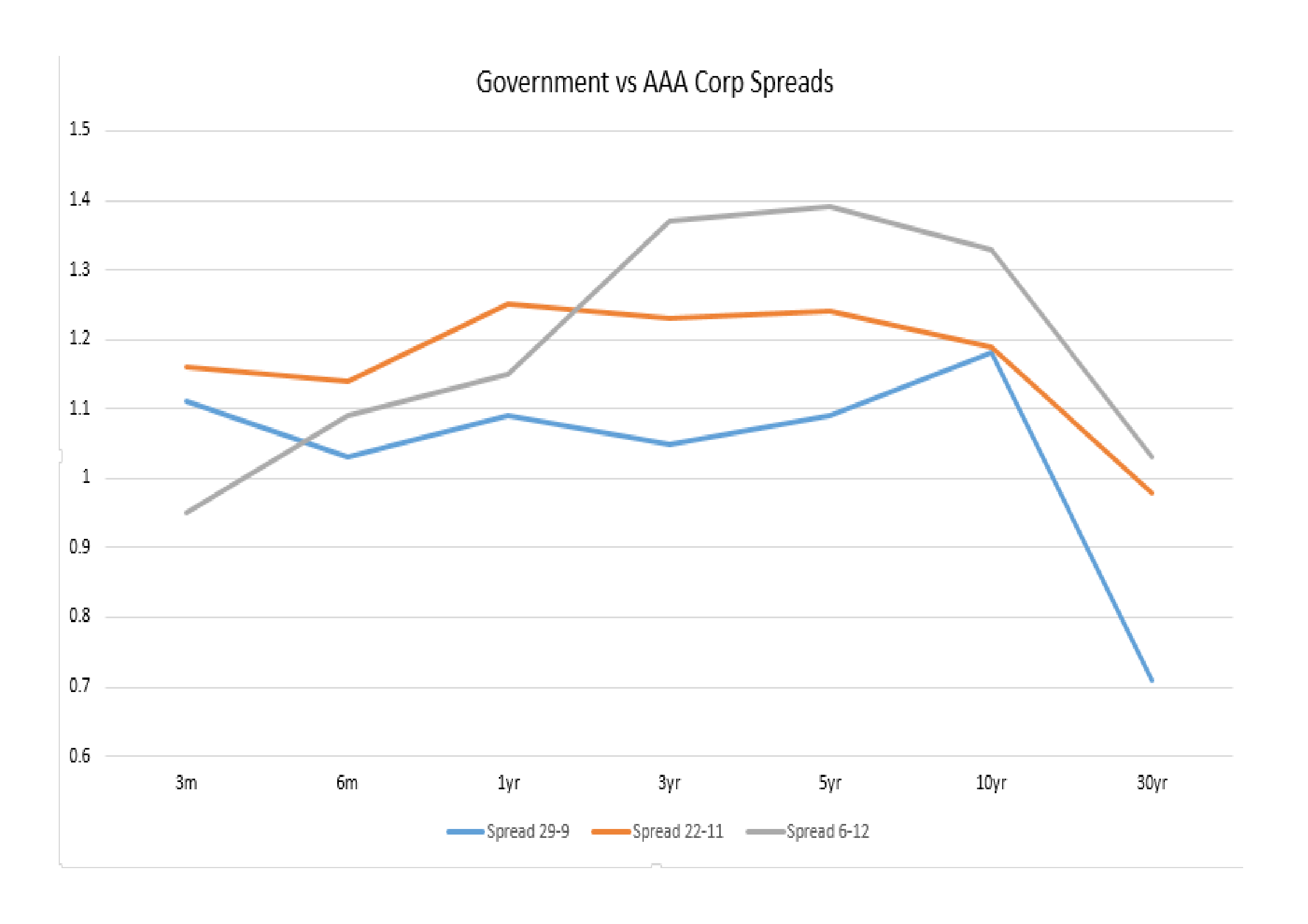 Spreads have generally widened as monetary conditions have tightened. The widening has been most pronounced in the 30yr maturity. The widening of credit spreads may be driven by the prospect of $1trln of corporate debt which is due to mature between now and 2019.

Another factor may be the change in policy announced by the PBoC on September 30th. Bloomberg – China’s Central Bank Unveils Targeted Lending Plan to Aid Growth provides an excellent overview:-

Banks will enjoy 0.5 percentage point RRR cut if eligible lending exceeds 1.5 percent or more of their new lending in 2017

Deduction will be 1.5 percentage point if eligible lending reaches 10 percent or more of new lending in 2017, or if “inclusive finance” loans take up 10 percent of total outstanding loans in 2017

The RRR is the Reserve Requirement Ratio. This is a targeted easing of lending requirements aimed at directing credit to small and medium sized enterprises (SMEs) rather than state owned enterprises (SOEs) and encouraging lending to the agricultural sector. It also favour banks over the shadow banking sector. This policy shift was a rapid response to a trend which has been evident this year. Whilst credit continues to expand the percentage of credit directed to SMEs dropped from 50% in 2016 to 30% in 2017 – this policy aims to rebalance the supply of credit.

Despite expectations that the first half of 2017 would be strongest, the Chinese economy continues to grow above official forecasts, Q3 GDP came in at 6.8%. M2 money supply growth, by contrast, was only 8.8% in October versus 9.2% in September. The chart below shows the declining pattern over the past five years:- 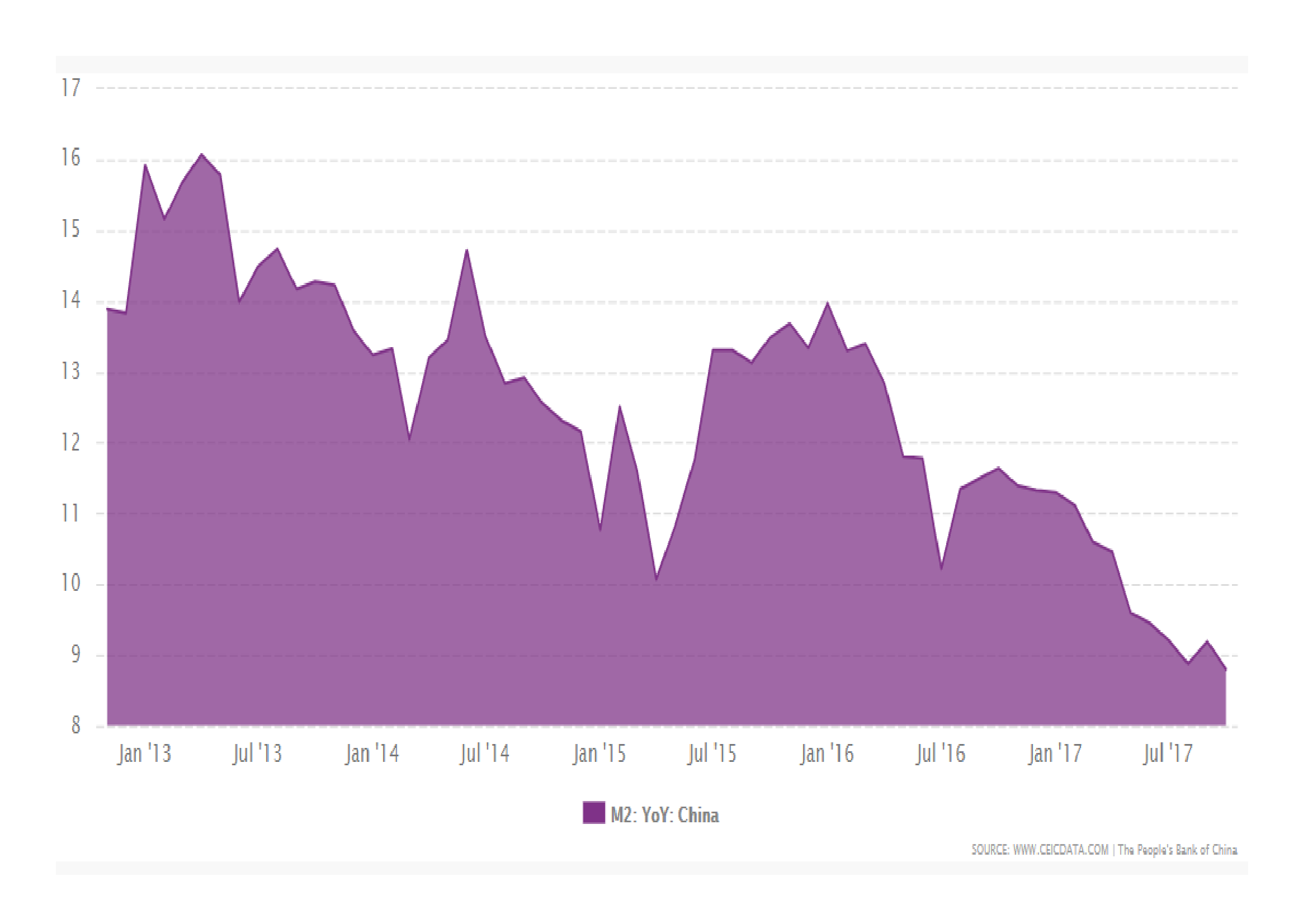 What impact has this had on stocks? Not much, so far, is the answer:-

Chinese stocks, as I have mentioned previously, do not look excessively expensive by several measures, however, this is not to suggest that they will not fall. According to Star Capital, at the end of September the PE ratio for China was 7.6 but the CAPE ratio was a much higher 17.3. The Dividend yield (3.9%) offers some comfort nonetheless.

Chinese economic growth remains spectacular but the authorities are interested in promoting inclusive growth rather than encouraging individual speculation. Official interest rates have been 4.35% since October 2015, which is the lowest they have ever been, however, the reverse repo rate was increased in January from 2.25% to 2.45% and the standing loan facility rate increased in March from 3.1% to 3.3%. The bond market expects this mild tightening bias to continue. Meanwhile, inflation, which was 1.9%, up from 0.8% in February, is hardly cause for concern.

Chinese stocks can be divided into SOEs and Non-SOEs. Since the beginning of 2017 the sectors have diverged sharply, as this chart of the WisdomTree China ex-State-Owned Enterprises Fund (CXSE) versus the MSCI China Index (NDEUCHF), indicates:- 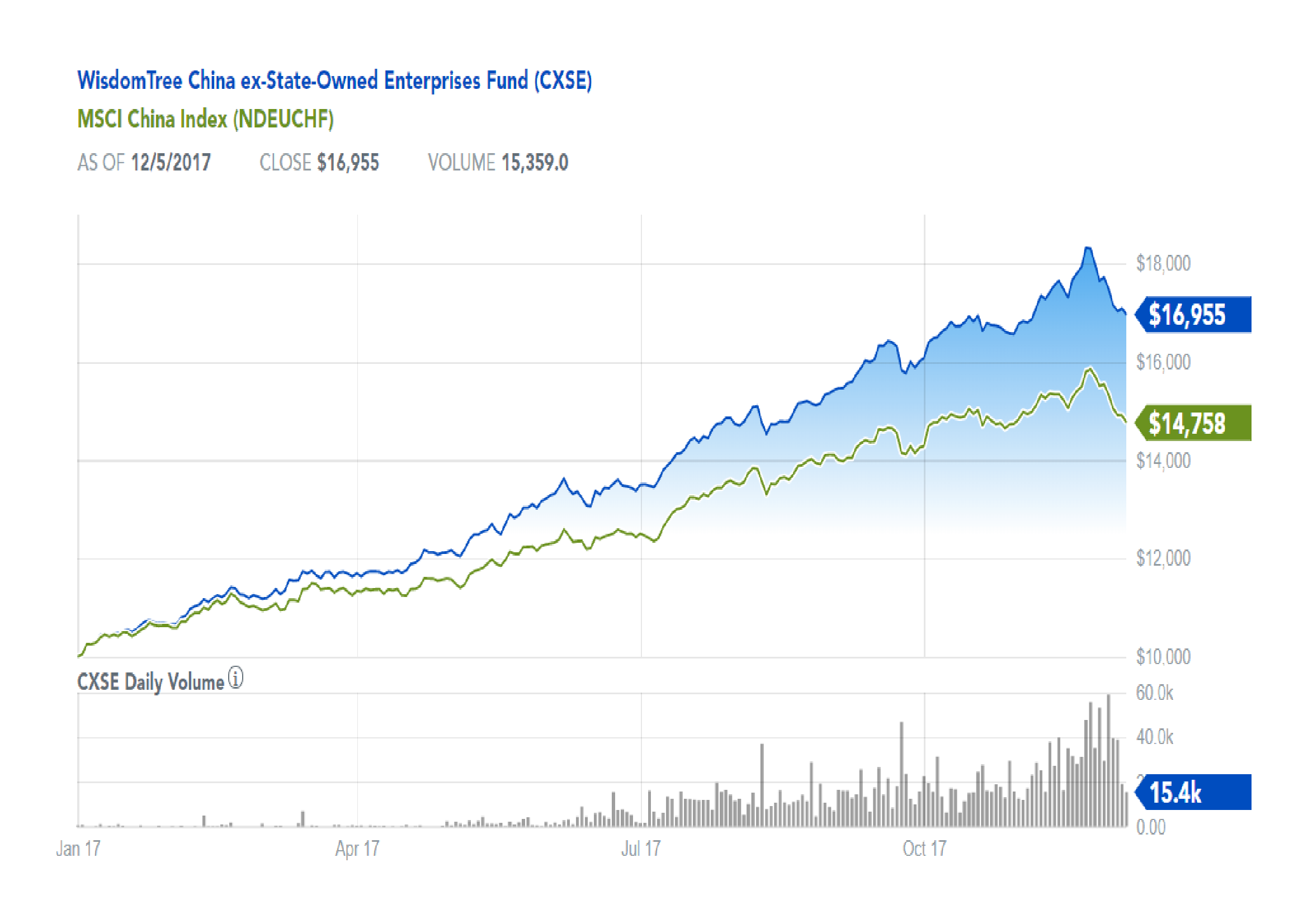 Even since the end of November, when stocks fell abruptly, the outperformance of, what some are calling new-China, has been maintained. This is not to suggest that PBoC policy is deliberately designed to support the new-China economy, but when the interests of the Chinese people and that of enterprises align it can be a winning combination.

It is still too soon to predict the end of the rise in Chinese stocks, the authorities, however, are determined not to allow a repeat of the speculative bubble of 2015. The combination of a continued decline in the pace of money supply growth and higher bond yields, may see Chinese stocks decline in response to monetary tightening before those of developed nation countries. Chinese stocks trade differently to those listed in more open markets, nonetheless, the importance of China should not be underestimated: it might even be the leading indicator for world markets.

This chapter from Human Action is spot on for today: Part 4, Chapter XVII. INDIRECT EXCHANGE 18. The Inflationist View of History A very…