Before we discuss the economic situation of China, a few words about China’s strongman, Xi Jinping. The “new Chinese emperor” has engineered a meteoric rise. He started off as simple rural laborer but is now the most powerful Chinese president since Deng Xiaoping. Such a career path requires strength, tact, and probably a dash of unscrupulousness.

While the rulers of China have been able all along to hedge their plans over longer periods than their Western counterparts have, the new legal situation has extended this planning horizon even further.1 In comparison with those of Western economies, China’s countermeasures against the crisis in 2008 were significantly more drastic. While in the US the balance sheet total of the banking system increased by USD 4,000bn in the years after the global financial crisis, the balance sheet of the Chinese banking system expanded by USD 20,000bn in the same period. For reference: This is four times the Japanese GDP. 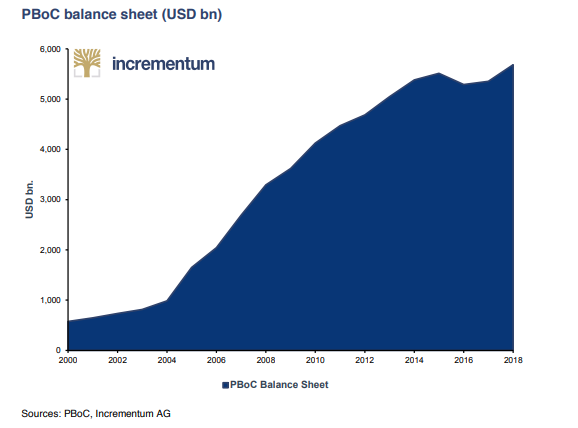 The following chart shows the expansion of the bank balance sheet total as compared to economic output. Did the Chinese authorities assume excessive risks in fighting the crisis? 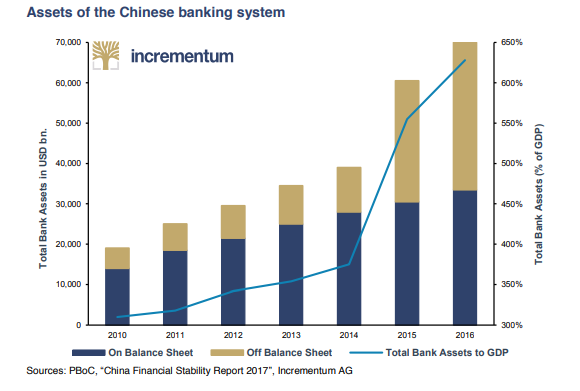 Neither the fact that China’s bank balance sheets amount to more than 600% of GDP nor the fact that they have doubled in terms of percentage of GDP in the past several years suggests a healthy development. Our friends from Condor Capital expect NPL ratios51F to rise in China, which could translate into credit losses of USD 2,700 to 3,500bn for China’s banks, and this is under the assumption of no contagion (!). By comparison, the losses of the global banking system since the financial crisis have been almost moderate at USD 1,500bn

The most recent crisis does teach us, however, that the Chinese are prepared to take drastic measures if necessary. China fought the financial crisis by flooding the credit markets: 35% credit growth in one year on the basis of a classic Keynesian spending program is no small matter. 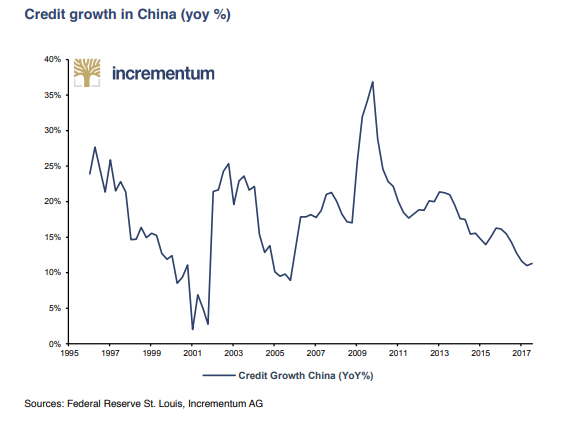 Chinese money not only inflates a property bubble domestically but also around the globe (e.g. in Sydney and Vancouver). Further support for the global property markets is in question, given the measures China has recently launched. Due to financial problems, Chinese groups such as Anbang and HNA will have to swap the role of buyer for that of seller.

The IMF has forecast a further doubling of total Chinese debt outstanding from USD 27,000bn in 2016 to USD 54,000bn in 2022. By comparison, in 2016 China’s GDP amounted to USD 11,200bn. This spells debt-induced growth at declining rates of marginal utility. From our point of view, this development – which we can also see in the West – is unsustainable. 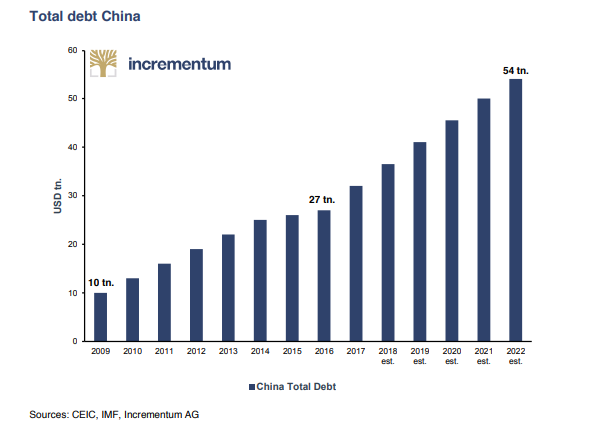 In its most recent report, “Credit Booms – Is China different?”, the IMF states that in 43 cases worldwide of strong credit growth (i.e. the ratio of credit to GDP grows more than 30% over five years), only five cases ended up without a significant slowdown or a financial crisis. The IMF also points out that no expansion of credit that started at a debt to GDP ratio above 100% of GDP ended well. It is worth noting that China has a high percentage of domestic as opposed to foreign debt, which definitely makes matters easier for the country. But the question is: Will it be different for China this time?

The 19th-century Opium Wars that China fought with England, which are deeply rooted within the collective memory of the Chinese people, are historical events that are of great importance in connection with the punitive tariffs imposed by the US, as they remain a fixed and integral part of the Chinese history curriculum in schools.2 If necessary, China could stir up anti-Western sentiment in order to implement measures that are hard on its own population, even if they are unpopular. The buck would of course stop with the Americans. Thus, the US could shoot itself in the foot with any escalation of the trade war, as we regard the ability to bear hardships and the cohesion of Chinese society as much stronger than those of the American society.

The demographic development of China is also worth a quick sidebar. The World Bank forecasts a population peak of 1.4bn for China in 2028. The decline in population that is predicted to set in around that time should proceed at a similar pace as the increase towards the peak. 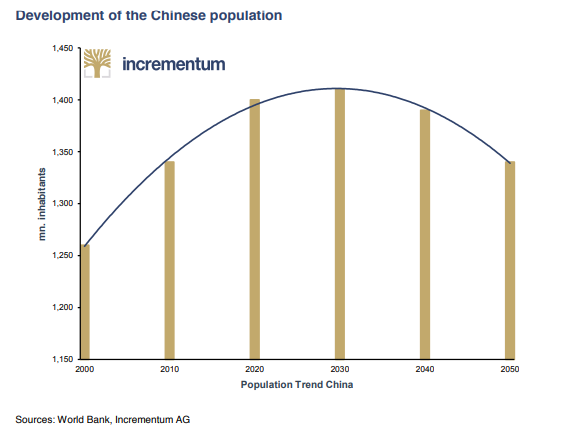 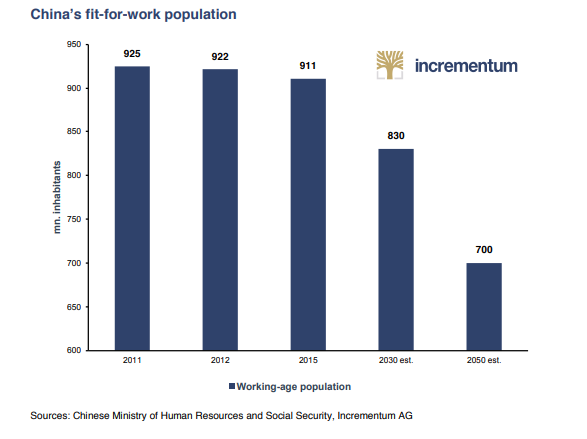 Unlike his Western competitors, China’s new strongman, Xi, can implement his long-term strategy in a targeted and gradual fashion. Xi explicitly underlined his goal of asserting China’s interests in the world by referring to military, economic, political, and diplomatic means in his speech at the National Congress in October 2017.3 He left no doubt that China was not willing to compromise in any shape or form with regard to its territorial integrity (N.B. Taiwan, Hong Kong, Tibet), and he issued point-blank threats against separatist tendencies.

However, the transformation of the economy could (intentionally or otherwise) cause economic distortions not only in China but globally. Recent years have been dominated by a massive expansion of credit. In fact, it is often said that China has blown the biggest credit bubble in history.

It seems, there are greater similarities between China and the US than may be visible at first glance. China builds real estate for a shrinking population, invests for an overindebted client (the US, which even insists on a drastic reduction of the bilateral trade deficit) and finances all this with money it does not have.4

Ronald-Peter Stöferle is managing partner and fund manager at Incrementum AG, Liechtenstein. He invests using the principles of the Austrian school of economics.

0 replies on “China is in Trouble”