In Macro Letter – No 96 – 04-05-2018 – Is the US exporting a recession? I speculated on whether US tightening of monetary policy and the reversal of QE was causing more difficulty for emerging markets – and even perhaps Europe – than it was for the domestic US economy. I was therefore delighted to receive an update on 9th December from the Federal Reserve Bank of Dallas, entitled, Reserve Adequacy Explains Emerging-Market Sensitivity to U.S. Monetary Policy. The authors, J. Scott Davis, Dan Crowley and Michael Morris, remind readers that Past-Chairman Greenspan made the following observations after the Asian crisis of 1997/98: –

In a 1999 speech to the World Bank, Greenspan summarized the rule stating “that countries should manage their external assets and liabilities in such a way that they are always able to live without new foreign borrowing for up to one year.

Personally I find the choice of one year to be a conveniently arbitrary time period, but the remark was probably more concerned with prudence, after the event, than an attempt to model the sudden-stop over time. It also ties in with the generally agreed definition of a country’s short-term debt, that which has to be repaid or rolled over within a year.

The authors go on to discuss reserve balances: –

The burning question is, what level of reserves is necessary to insure the stability of one’s currency? The authors suggest that this should be the following equation: –

Their solution is to observe daily changes in the interest rate spread between the Corporate Emerging Market Bond Index (CEMBI) and 12 month Fed Fund Futures. To relate this to the level of central bank reserves an ‘interaction term’ is constructed which describes to relationship between reserve levels and credit spreads. An iterative process arrives at a level of reserves relative to a countries GDP. One may argue about the flaws in this simple model, however, it arrives at the conclusion that a 7.1% central bank currency reserve adequacy to GDP ratio is the inflection point: –

The chart below shows the level of reserves for selected EM countries since 2010, the colour coding shows in red those countries with reserves less than 7.1% of GDP and in blue those above the threshold: – 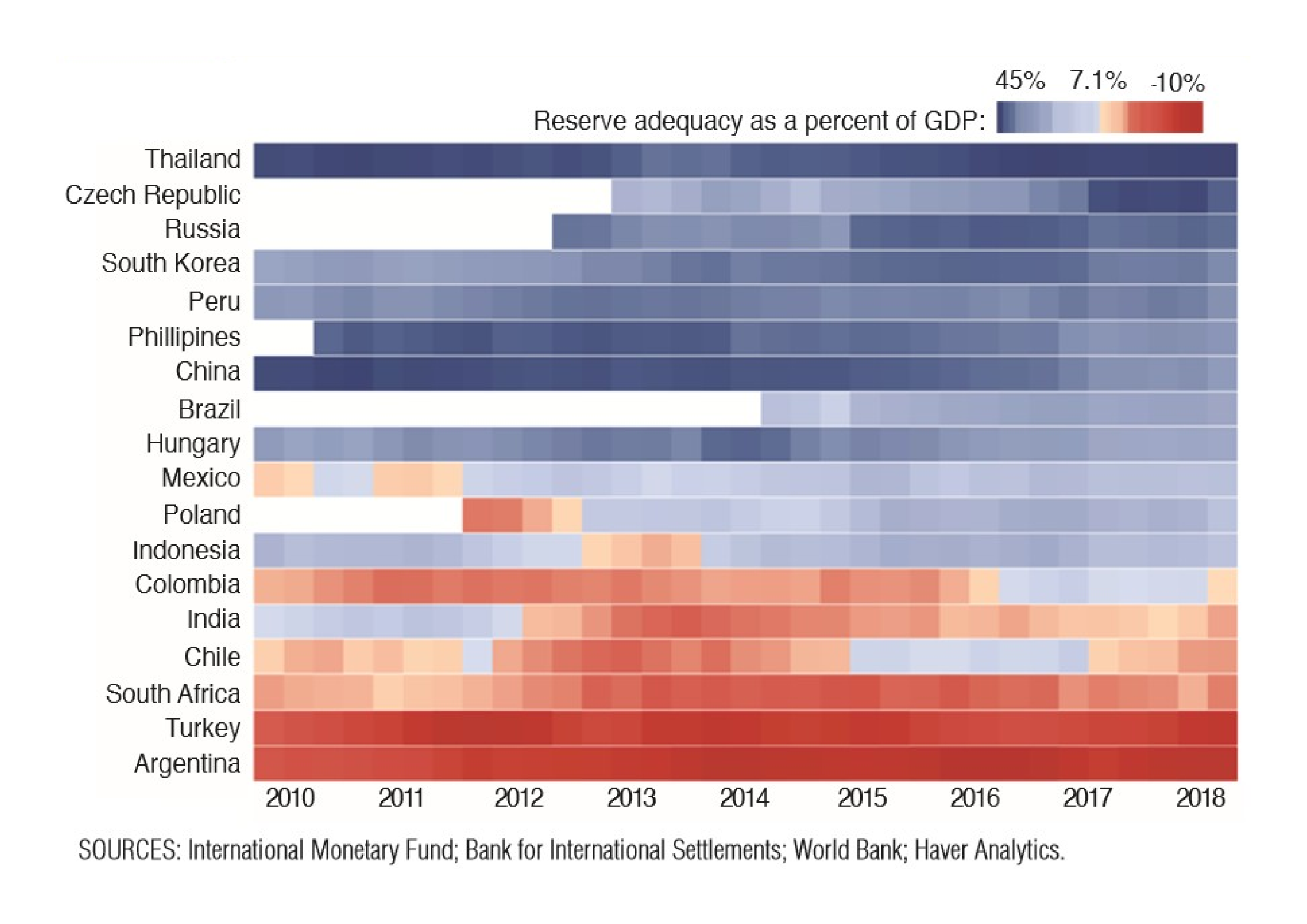 The Fed model is elegantly simple, it would be interesting to investigate its applicability to smaller developed economies; I imagine a similar pattern may be observed, although the reserve requirement inflection point might be lower, a reflection of the depth of their domestic capital markets. I also wonder about the effect of the absolute level of interest rates and the interest rate differential between one country and its reserve currency comparator – not all emerging markets peg themselves to the US$.

This study could also be applied to frontier economies although it may not necessarily be so effective in measuring risk when the statistical basis of GDP and other statistical measurements is suspect – consider the recent upward revisions of the economic size of countries such as Nigeria and Ghana. This paper from World Economics – Measuring GDP in Africa – March 2016 – has more detail.

As part of an initial screening of EM markets for potential risk, the central bank reserve to GDP ratio is easy to calculate. It will not reveal the exact timing of a currency depreciation but it is an excellent sanity check when one is tempted, for other reasons, to invest.

Last year Turkey and Argentina both saw a sudden depreciation, but, with the Federal Reserve now indicating that its tightening phase may have run its course, now is the time to look for value even among the casualties of the Fed. India is, of course, my long-term EM of choice, but as a shorter-term, speculative, recovery trade Turkish or Argentine bonds are worthy of consideration. With inverted curves, shorter duration bonds are their own reward. Argentine 4yr bonds spiked to yield 36% in November and currently offer a 33% yield. Turkish 1yr bonds are even more beguiling, they spiked to a yield of 32% in October but still offer a 22% return. Momentum still favours a short exposure so there is time to take advantage of these elevated returns.

Slovakia’s parliament recently voted against the proposed increase to the EFSF. The BBC’s Rob Cameron says “a second vote could be held soon and…