Inasmuch as we pay any homage to macro, our investment thesis is straightforward. There is too much debt in the world, and not all of it will get paid back. As something of a cinéaste, this correspondent is fond of citing the 1983 Cold War film War Games in defence of this investment approach: if you don’t understand the rules of the game, sometimes it’s better not to play.

No doubt certain traders think they understand why it makes sense to own debt issued by insolvent governments at negative yields (duh ! QE !), but we’re in the business of capital preservation as opposed to speculating in return-free risk at its all-time highs. As the financial analyst and market historian Russell Napier points out in his Solid Ground newsletter of 19th June (‘The jolt of the needle: record low bond yields and the earthquake that follows’), many key government bond yields have fallen below both their 2009 and 2016 lows:

As a financial analyst one is often asked, “Where do you see financial bubbles today ?” When risk-free rates are this low it is easy to see them everywhere, but of course the biggest bubble must be in those so-called ‘risk free rates’ themselves. Remember these are the ‘risk-free’ assets many financial institutions are forced to hold to reduce their balance sheet risk !

So, absent a modest allocation to near-cash short term government debt and only the most objectively creditworthy and inflation-linked corporate debt, bonds are basically out.

That isn’t necessarily a problem, though, as it still leaves us with a massive investment opportunity set, incorporating value stocks from around the world, systematic trend-following funds, and real assets, notably the monetary metals. (Our best attempt, to date, to solve the riddle of owning a variety of sensible assets that are also uncorrelated against each other.)

For anyone owning listed stocks, the latest Bank of America Merrill Lynch fund manager survey makes for interesting reading. Their 7th to 13th June survey, which polled 230 panellists accounting for some $645 billion in assets, amounts to the most bearish survey of investor confidence since the Global Financial Crisis. Respondents cited “concerns over trade war / recession; monetary policy impotence; and low strike prices for policy puts”. Average uninvested cash levels jumped from 4.6%  of portfolio NAVs to 5.6% – the biggest jump in cash since the 2011 US debt ceiling crisis. Given that institutional fund managers are not known for their moral courage or independence of thought, the logical response to the BAML survey is to feel amazingly bullish about the shorter term prospects for the stock market (and notably the US).

But there’s not so much compelling value on offer in the US market, relative, say, to what’s available overseas. At the risk of sounding like a broken record, the really compelling value is still on offer in Japan. The chart below, courtesy of CLSA’s John Seagrim, shows price to tangible book value for the S&P 500 (dark blue), MSCI Europe (light blue) and Topix (red). 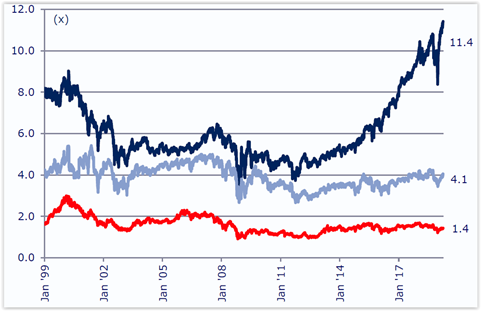 But if you like the look of those apples, you’ll love these. Strip out financials, and Japan moves from being spectacularly cheap to being unbelievably, mind-alteringly cheap. 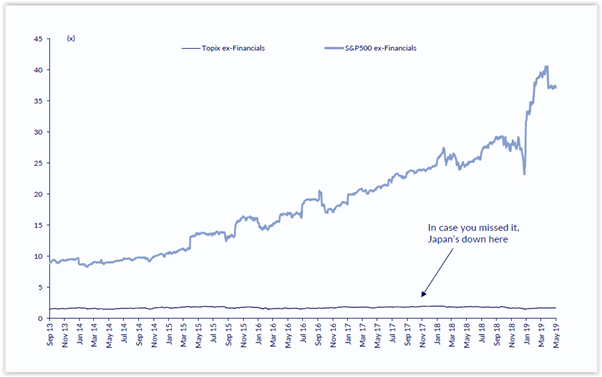 And no, you are not reading it wrong. Exclude financials, and against tangible book value, the US trades on 37.1x and Japan trades at 1.67x. (You can perhaps see why we have more exposure to Japan in our fund than any other market.)

Systematic trend-followers have admittedly been sub-par performers for some time. But we like the risk-reward. The risk is that we incur perhaps a few years of relatively modest losses. The reward is that we own vehicles that are genuinely uncorrelated to stock and bond markets and which offer the potential to generate outsized gains as and when substantial price trends emerge (not least on the downside).

Which brings us to real assets. If you believe, as we do, that the endgame of this absurd monetary experiment will be a messily inflationary one (albeit perhaps with a dash of deflationary black comedy before we get there), then it makes sense to own an inflation hedge. Perhaps a store of value that has remained such for 5,000 years.

As the good folk at Incrementum point out in their magisterial assessment of prospects for the yellow metal, In Gold We Trust,  it turns out that gold hasn’t been a bad store of value even over the last extraordinary two decades of widespread financial fraud and currency and interest rate debauchery: 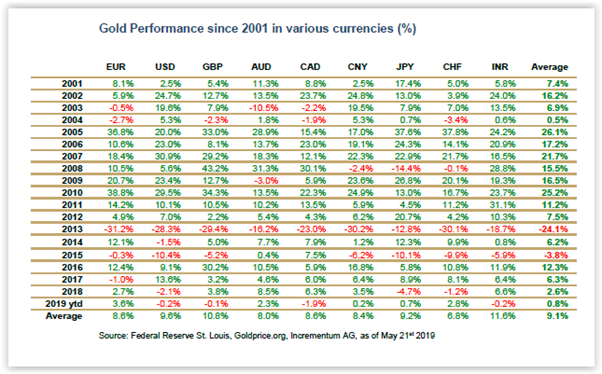 The past 12 months have shown that the seemingly invulnerable economic upswing has begun to crack deeply. The worldwide boom, driven by low interest rates and a ceaseless expansion of credit and money, now stands on feet of clay. The probability that the boom will turn to a bust is high, or at least significantly higher than the mainstream assumes.

The developing political, social, economic, and technological upheavals are enormous. On many fronts confidence in the existing order is crumbling, while the new order has not yet gained enough trust to have a stabilizing effect. This trend will intensify in the coming years. In addition, the bubbles in the equity, bond, and real estate markets – the Everything Bubble – and the corrosive dynamic of overindebtedness further exacerbate the fragility of markets – month after month, week after week, day after day.

As we’ve remarked, we don’t really do macro. Instead, we try and move client capital away from the more obvious red flags and towards the more obvious opportunities displaying high quality, and / or a lack of correlation to traditional markets, and / or otherwise defensive characteristics. Value stocks; trend-followers; gold. So what colour is your parachute ?

The world is facing the worst financial crisis since at least the 1930s “if not ever,” the Governor of the Bank of England said…