Sean Corrigan, Chief Investment Strategist at Diapason Commodities Management, has kindly agreed to the reproduction of his briefing “Material Evidence” by the Cobden Centre. In this, 9 July 2009, edition, Sean restates the his position on banks: that they should have to comply with basic, everyday property and contractual law. 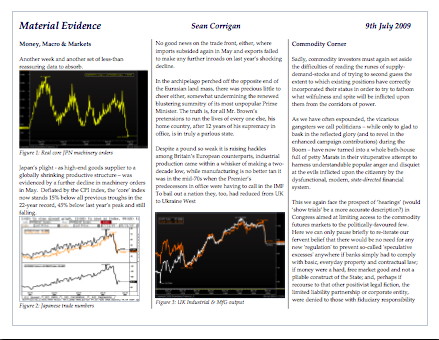 As we have often expounded, the vicarious gangsters we call politicians – while only to glad to bask in the reflected glory (and to revel in the enhanced campaign contributions) during the Boom – have now turned into a whole bath‐house full of petty Marats in their vituperative attempt to harness understandable popular anger and disquiet at the evils inflicted upon the citizenry by the dysfunctional, modern, state‐directed financial system.

This we again face the prospect of ‘hearings’ (would ‘show trials’ be a more accurate description?) in Congress aimed at limiting access to the commodity futures markets to the politically‐favoured few. Here we can only pause briefly to re‐iterate our fervent belief that there would be no need for any new ʹregulationʹ to prevent so‐called ʹspeculative excessesʹ anywhere if banks simply had to comply with basic, everyday property and contractual law; if money were a hard, free market good and not a pliable construct of the State; and, perhaps if recourse to that other positivist legal fiction, the limited liability partnership or corporate entity, were denied to those with fiduciary responsibility for other peopleʹs affairs. It would be much more effective ‐ if politically inconceivable – to address the root cause of all our ills, rather than to visit economically‐illiterate prejudices on its symptoms. If we cut the shoals of ʹvampire squidʹ down to their proper size, we could abolish the CFTC, the FDIC, the OCC, the SEC and the rest of the New Deal alphabet soup altogether, rather than uselessly empowering yet another tool for arbitrary, legislative grandstanding.

As I was reading of yet another spectacular mismatch between bank managers’ competence and their remuneration, and this time at JP Morgan no less,…