By kind permission of Sean Corrigan, we reproduce his report Tangible Ideas – Goodbye to All That, in which he explains the end of an economic era.

The sheer violence of this reversal of fortune – something akin to the sudden, mortal swoop of a melted‐wax Icarus after long hours of patiently spiralling heavenward on the thermals rising off the Cretan coast ‐ has perplexed everyone from Her Britannic Majesty and her hapless First Minister to the fallen idols of investment practice, like Bill Miller and Bruce Bent – yet while its pattern may be a complex tangle of circumstances, there are, in truth, only a few basic threads in the weave, all of them very familiar to those with an Austrian perspective on the case: fiat money, gross government interference with markets, and the avid, rent‐grubbing irresponsibility it fosters in everyone involved from the most prominent financial flesheater to the most pathetic, Forgotten Man structured‐product stuffee.

And malinvestment arising from the system of money:

The reason [the nature of modern money] has been so pernicious is that it has circumvented the very business of reserve management and so has turned what should be the semi‐automatic self‐equilibration of the classical specie‐flow mechanism into a positive feedback of ever wider current account gaps, ever more profound misallocation of capital, ever more inflation ‐ albeit one masked in terms of finished good prices, as we have already seen, by the supply side impact of shifting production to where labour is cheap and the local politburo is happy to connive with its buddies in the state‐owned enterprises to provide near‐costless finance, inexpensive land, export tax incentives, and even subsidised utilities to a producer who is therefore relatively indifferent to the price he has to pay for his commodity inputs (remember those relative price trends we discussed earlier).

In a fair system, based on a proper, hard currency, the country running a deficit settles up by losing the bullion on which its circulation is based: domestic credit then contracts, prices fall, activity shifts to import substitution, and competitiveness is hence restored – an adjustment quickened by the fact that equal and opposite changes are taking place in the surplus country. ‘The monetary sin of the West’, however (to employ another Rueffism), is that while the surplus country today uses its excess foreign exchange receipts to expand the stock of high-powered money at home and so triggers its own production‐lengthening cycle, it simultaneously loans those same receipts straight back to their creators, preserving their credit pyramid in turn and thus encouraging them to continue their gross overconsumption.

Adding to the dangers, the deficit nation central bank sees the low‐price imports and artificially stabilized exchange‐rate as helping achieve its monophthalmic goal of suppressing ‘inflation’ which – being typically mainstream in its analysis – it imagines to consist only of rises in its favourite (usually pared) consumer price index. It is thus perilously predisposed to running far too loose at the same time as its foreign counterpart is relaxing, all despite the obvious warning sign which the trade deficit itself constitutes, namely, that demand has already outstripped the potential for domestic output to meet it.

Inevitably, in the over‐financed, speculative milieu in which we live, the excess credit thus called into existence soon spills over into asset markets (whose inordinate rise does not at all figure in the wholly naïve policy settings being followed) and so begins that unstable spiral of financial convection which sees notional net worth increasing and effortlessly generating the fresh collateral which will form the basis for yet more asset price‐boosting loans in the next iteration. Tempted by the capacity to engineer illusory and prematurely capitalised ‘profits’ in such a conducive current, the ever more hubristic bankers – by now not so much on Cristal Roederer as on crystal meth (metaphorically speaking, of course) – soon allow their hired‐in, mathematical idiot savants to ferret out highly explosive ways to cheat shareholders and regulators of due disclosure and so arrange to heap a Pelion of non‐linearity upon an Ossa of over‐leverage and undercapitalization.

And on the role of credit in the crisis:

Perhaps the quickest and cleanest way to show this was indeed the case is to look at the behaviour of the BIS series for member‐country banking balance sheets over the relevant periods. Indeed, if we consider that inflation – i.e. excess money creation – is, these days, primarily an increase in (demand) liabilities at banks, it is instructive to look at the explosion in their size (here, strictly speaking, we have performed our calculations on the other side of the balance sheet for convenience, but the difference is not significant). 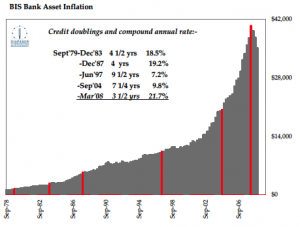 In the 3 ½ years to the March 2008 quarterly peak of $40 trillion, total banking claims grew virulently at a ~22% compound annual rate, achieving the fastest nominal doubling in a three‐decade data series. Though it took a while for consumer prices to respond, if you wanted inflation (properly defined), you certainly had it in spades going into the Crash!

The market may have to suffer a nasty bout of disillusion before it reconciles itself to the fact that the halcyon days are long gone and that the clock is everywhere ticking toward a reckoning with the government debt market.