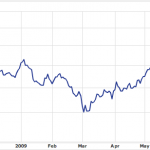 The FTSE 100 Share Index has been riding high since it fell to a low of 3,512 on March 2, and continues to flirt with the 4,700 barrier. With the economic data being still so poor and underlying company results being very weak, why would this be so?

In the UK, we have seen, in the space of a year, the Bank of England Balance Sheet climb by 158%. This is in large part due to the £175 billion QE (Quantitive Easing – crudely speaking, printing money (Zimbabwe style) out of thin air) program. This is where in short, one arm of the government (the Bank of England) buys existing outstanding securities such as Treasury Bonds, that the other side of the Government, has issued to various creditors of the government with freshly minted cash, created out of thin air. This new money needs to ultimately be banked somewhere in the banking system. At the bottom of the banking system upon which all reserves of the banks sit, we have the Bank of England itself. Hence its balance sheet rises.

What happens to this new money?

If more money exists today than yesterday then all other things being equal, we can deduce that there is a surplus of money in relation to money demanded. What happens to this surplus? The only way to get shot of a surplus of money is to spend it. This spending increase prices of the goods and services that it is being spent on. One of the most liquid places for you to spend this surplus is to put it in near liquid assets such as highly traded shares. As excess liquidity builds up all over the world, over and above money demanded, we see various stock exchanges rising. In a separate article, our colleague Sean Corrigan points out that the huge increase in M1 in China has set the Shanghai Composite reaching for the top of Mount Everest!

What is Money Demanded?

Does a stock exchange index reflect the value of the companies that make it up?

The monetary value of something is what the next person is prepared to pay for it. The stocks in the FTSE are no different. There as been a 30% increase in the value of the FTSE100 over the last 5 months, is this because underlying corporate earning have substantially, no, astronomically recovered? No, it is more to do with the fact that there is excess liquidity in the system created by the Government to provide the illusion of wealth. This is a dangerous policy to continue for the reasons mentioned here.

I would also suggest to any investor that they should watch the size of the Bank of England’s Balance Sheet as a key determinate in liquidity in the most liquid of markets such as the stock exchange. When the Bank starts to reverse its asset purchase program, this liquidity effect will start to unravel and put downward pressure on the Stocks. The only thing that will stop this unraveling is genuinely more production taking place, more efficiently with the given factors of production, by entrepreneurs in real business doing real things. This will create real demand for the service of money and real exchange for real goods and services that people want. We need to hope that the productivity gains that this recession is foisting on the private sector outpace the decline in liquidity that must happen when the Bank starts to reverse its process of QE.

Written By
Toby Baxendale
More from Toby Baxendale
There are 2.7 million people claiming Incapacity Benefit in this nation. I...
Read More

One reply on “Why is the FTSE going up?”