Should banks be permitted to operate with a fractional reserve on demand deposits or should 100% reserves be a legal requirement? Should there be a central bank with a monopoly on note issue? What are the consequences of these choices? These were mainstream questions in the 19th century and they demand attention today. Here, following the ESCP Europe/Cobden Centre “Colloquium on Honest Money”, Steve Baker  frames the debate to be had about money and banking.

Today, people are well aware that we have a banking crisis, a “credit crunch“. That is, there is a problem in the financial system, a system which is centrally planned — see Economic Interventionism, Banks and the Crisis — and an approach which necessarily works badly — see Strip the Bank of England of its power. So, what are the features of the present system and what are the alternatives?

The two important features of the present, orthodox system are:

Stepping back from today’s monetary orthodoxy — a fractional reserve and a central bank — the options are plain: we can have a 100% reserve on demand deposits, or not, and separately, we can have central banks with a monopoly on the supply of currency, or not. Hence, Jesús Huerta de Soto models (PDF) the banking debate as follows: 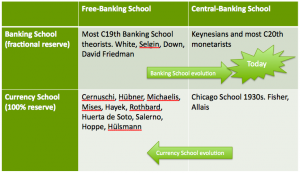 As Irving Fisher, one of the founders of Monetarism, pointed out in the sub-title and content of his book 100% Money, there are potential benefits to be gained from moving to another system. For example, Fisher identified the following as the headline benefits of moving to a 100% reserve requirement:

Since we have had a run on a bank, since the money supply has deflated, since attempts to reflate the money supply risk price inflation and distort the economy, since the boom-bust cycle is evidently still in progress and since we are doubling our national debt, it is perhaps worth taking seriously the question of how our system of money and banking is organized.

Furthering that discussion was the purpose of the recent ESCP Europe/Cobden Centre Colloquium on Honest Money directed by Founding Fellow Dr Anthony J. Evans, Chaired by Corporate Affairs Director Steve Baker and attended by Chairman Toby Baxendale amongst 9 other academics and practitioners in the field of money and banking.

We will continue to develop and promote a range of ideas to open up and further the debate on money and banking.

Dear Professor Mankiw: I am writing in response to your article in the New York Times, “The Puzzle of Low Interest Rates”. I commend…