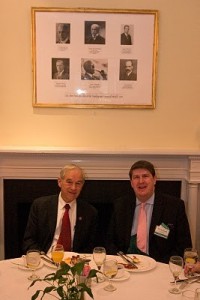 As previously mentioned on this blog, TCC’s Chairman Toby Baxendale and I traveled to Jeykell Island in the US the weekend before last to attend a major conference hosted by the good people of the Ludwig von Mises Institute. Headed ‘The Birth and Death of the Fed’ not only was the event very impressive in its own right – very well organised with several hundred people in attendance – but there were lots of excellent speakers exploring money and banking from an Austrian school perspective. You can listen to the main highlights here through these links:

Robert P. Murphy – Only the Austrians can Can Explain Depressions

Christopher Westley – Why the Fed Got Birthed?

Joseph T. Salerno – The Macroeconomics of the Fed: Mainstream and Austrian

Mark Thornton – What Were They Saying in July 2007?

Gary North – Heckle and Jekyll: How Murray Rothbard Got the Fed’s Story Right

Thomas E. Woods, Jr. – The Source and Workings of the Latest Crisis

Ron Paul – My Battle Against the Fed

For me, it was not only a delight to listen to and meet Lew Rockwell but it was also a particular pleasure to meet and talk with Congressman Ron Paul. A most intelligent and moral person, I found him to be every bit the gentleman I had expected.

Written By
Dr Tim Evans
More from Dr Tim Evans
Ten years ago, I got into a lot of (understandable) trouble when...
Read More

2 replies on “Austrian economics, meeting Lew Rockwell and having time with Ron Paul”