Prof J Guido Hülsmann of the University of Angers gave a private talk on the 10th of July called “Honest Savings and Dishonest Money” The slides of the talk are available below (PDF). I strongly recommend a flick through them. Unfortunately the talk was not recorded, however I give you my personal take on what was said at the time. 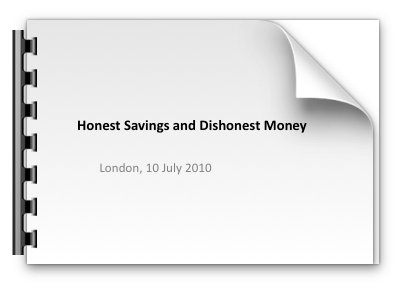 If you consume only, you will enjoy yourself for sure, but not putting anything else away means you can only consume out of current income. I explain to my Keynesian friends that if we can not save and only consume from income, we need to be an inter galactic hedge fudge manager or some super star celebrity to be able to afford to by a car or a house out of current income!

Savings are a voluntary act of forgoing consumption so that you can spend on consumption in the future.

When you save, someone is investing those savings to produce goods for you to buy in the future.

Savings are 2/3rds more than current GDP. Remember, as we strip out all intermediate goods in the formation of GDP statistics, we do not measure the savings that support the whole productive apparatus of the economy . I buy my fish off a boat, I cut and prepare it and sell it to a fish and chip shop who batters it, puts it in some paper and adds chips and sells fish and chips to you, the end consumer. What gets measured is fish and chips only, the rest of the production sectors of the economy whose engine is driven by savings is totally discounted as far as virtually all economists are concerned because of their erroneous understanding of capital and what constitutes a double count. To really make this clear, what the current regime of economists are telling us is that when we eat fish and chips, from an economic point of view, we eat the difference (incremental gain) between the cutting of the fish, the battering of it and the paper and the chips. This consumption envy drives the way people think at the expense of understanding the role of savings and is supported by an odd measure of the economy at the outset.

Without constant replenishment of this pool of productive savings, we will consume our way into oblivion. 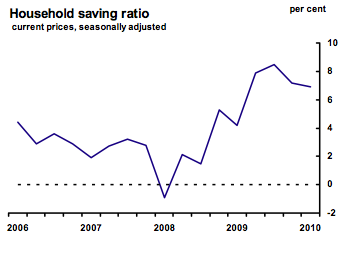 This graph I have added which shows that in early 2008, a few months before the “Lehman event” we had gone into negative savings and started to hollow out the kitchen cupboards! If this graph is not “case proven My Lord” to everyone that 100% consumption is very bad for the economy, I do not know what is!

Sophism 1: A “leak” in the circuit of spending? – In Glory of Hoarding

To Keynes, a act of savings is a leak from the economy. If I choose to sit on all my money under a matters then I increase the purchasing power of all the money in ownership of others not under my mattress. I enrich people by an act of hoarding as their money units have more command on the same level of goods offered for sale.

Sophism 2: “The Paradox of Savings” – Circular Flow of Income

One man’s spending is another man’s income. Save, i.e. cut back on spending in the economy as a whole, and the workers’ income will fall. This will cause a depression. If the arguments in the above do not solve this then you must add, what matters is not that income will fall, but the relative difference between the level of costs and profits is the thing that really matters. If incomes all fall and thus the costs of labour has fallen, the companies costs positions go down in a greater percentage to their overall cost base, so they remain profitable, then there is no system wide depression as this adjustment process (bringing costs into line with expenditure and making business profitable once more) takes place. Relative cost and income matters, not absolute cost and income.

This is government-created money, created out of thin air, and private sector-created money created via the banking system (i.e. bank credit). The issue of this new money allows the holders of these instruments to consume something that they have not have had to work for; they give up nothing in exchange. This allows the State and its principal agents, the bankers, to be lawful counterfeiters.

This can never increase wealth. Only by the productive efforts of entrepreneurship, producing more goods in better ways, using less or more efficient factors of production, can we produce more wealth. If it was not so, and immaterial money was the answer, then world poverty could be ended today in one second with the opening electronically of zillions of demand deposits for the poor of the world.

Only a money rooted in a commodity (or a series of them) could prevent this. Since the dawn of man, the preferred commodity for use as money was gold. The government can’t create gold out of thin air; it is material, it is honest.

The push for consumption at the expense of savings means that we have funded this activity by more immaterial debt, credit, created ex nihilo. When people realised it was impossible to pay for all of this mess, there was a banking crisis. The State stepped in and bailed out the banks with promises of the minting of more immaterial money and indeed the printing of some as well . The result is that we now have a sovereign debt crisis. The only way out is to print more immaterial money i.e. monetise the debt which will decrease the purchasing power of all, to default, or to extract more money from the people via the tax system. As income tax only produces £142 bn PA and the deficit is larger than this, let alone any consideration to actually paying down any of the national debt itself, it is likely that our government will resort to monetisation or default.

These are my personal notes and thoughts on the presentation of Prof Hülsmann. The slides and presentation were excellent.