Beneath, I explain that, under the condition that the current financial system is not restructured, the proportion of the economy run by government, rather than reduce (as is currently proposed by the coalition) is instead much more likely to increase. This would certainly result in a reduction in rate of improvement of the standard of living at the very least and potentially could cause standards of living to drop. The situation is eerily reminiscent of Japan some 20 years ago. The fact that the current system can lead to such a consequence implies that a wholesale restructuring of the banking system should be considered.

In order to maintain monetary inflation, the central bank is bound to print money and give it to someone.

In the UK, we have a situation where the private sector is paying down its debts. It is doing this due to the following three reasons:

Private sector debt-paydown results in money instruments being destroyed. This will tend to have a negative effect on prices.

The UK coalition government has expressed a wish to reduce government spending [1]. If this is the, case, this would also have a deflationary effect since at the very least, the rate of increase of creation of new debt instruments would reduce.

However, the central bank has a mandate to “maintain low inflation”, i.e. not negative, but low and positive. Prices are broadly affected by the amount of money in the system, allied to the willingness of individuals/government to spend it.

The private sector is no longer creating additional credit. However, the central bank still needs to fulfil its inflation mandate. Its typical method of doing this is to print new money to buy government bonds. This gives the government money which it spends in the economy, which achieves the central bank’s objective of raising prices over time.

Hence, on the assumption that the central bank acts to cause inflation and does this through the purchase of government bonds, it is almost guaranteed that the government will be the entity that engages in the additional spending. Of course, this can result in a vicious circle as the more the government spends, the more that the private sector saves to fund it, which results in deflation of prices and compels the central bank (under its idiotic inflation mandate) to print even more.

I predict that UK government spending, far from falling from its current level, will rise beyond all expectations over the next five years. Unfortunately, due to the government being an appalling investor of other people’s money, most of this spending will inevitably be wasted, which results in fewer goods produced by our nation and declining living standards for all.

Much as the creation of credit by private banks creates distortions, the new money created by banks at least gets lent by private institutions in order to make a profit. Hence, the return on these projects is likely to be greater than on those sponsored by governments. By this measure at least, credit-creation by banks is preferable to money-printing by governments (though neither is desirable).

This is not idle theory. We have seen this precise situation played out in Japan over the last 20 years following its debt crisis. The graph beneath shows what has happened to government debt in Japan since its banking crisis in 1990. 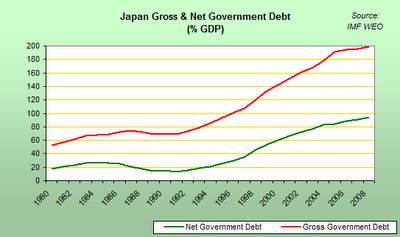 There is a way out. This is to allow businesses to go bust, to allow the loans in the system to go bad, allow interest rates to rise and to cut the size of the government. Unfortunately, this was not allowed to happen in Japan and there is absolutely no evidence that this is happening in the UK.

The current consensus is that the system is too fragile to allow this to happen. If this is the case, then there is clearly a problem with the system. The proposal put forward by Toby Baxendale is by far the best of any to reform the banking system that I have seen. It should be given more consideration than it currently has been.

[1] Or at least not increase spending — the Tax Payers’ Alliance recently examined HM Treasury’s numbers and concluded that government spending under our chancellor’s current forecasts would fall by a mighty 4% in real terms over this parliament; hardly austerity.

One reply on “Government spending to decrease? You’re having a laugh!”