On Friday July 30 the St. Louis Federal Reserve Bank President James Bullard, speaking on CNBC television, said that the Fed must weigh medium-term inflation risks at the same time as it faces the worry that in the near term, falling prices, or deflation, poses a problem.

For most economists and various commentators a general fall in prices, which is labeled deflation, is a terrible thing. It is held that a fall in prices generates expectations for a further decline in prices. As a result of this it is held, consumers postpone their buying of goods at present since they expect to buy these goods at a lower prices in the future.

Consequently, this weakens the overall flow of spending and this in turn weakens the economy. A fall in consumer expenditure subsequently not only weakens overall economic activity but also puts further pressure on prices, so it is argued. Note that from this it follows that deflation sets in motion a spiraling decline in economic activity.

According to this way of thinking one could conclude that a general fall in prices should be associated with an economic slump. Indeed during 1932 the fall in the CPI of 10.3% was associated with a fall in industrial production of 21.6%.

But is it true that a fall in prices should always be bad news for the economy? Take for instance a case where a general fall in prices has taken place as a result of an expansion in the production of goods and services. Why should this be classified as bad news?

On the contrary, every holder of money can now command a larger quantity of goods and services i.e. people’s living standard are going up – so what is wrong with this? 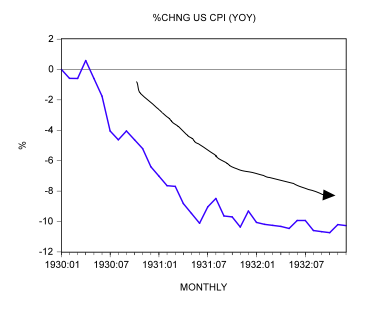 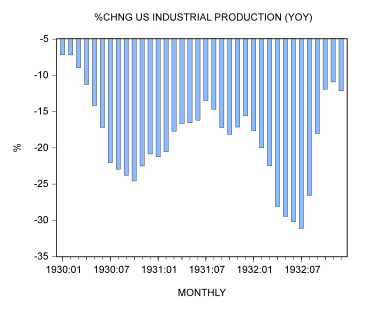 Does a general fall in prices cause people to postpone buying?

Also, if prices are trending down does it mean that people will stop buying at present? As a rule most individuals are trying to maintain their life and well being. This of course means that they will not postpone their buying of goods at present. 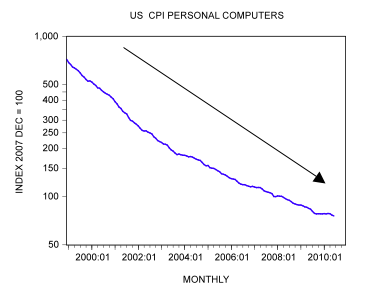 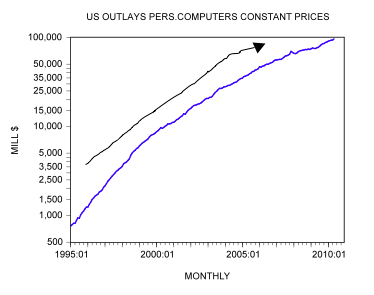 Now if deflation leads to an economic slump then following the logic of the popular thinking, policies that reverse deflation should be good for the economy. Since reversing deflation means introducing policies that boost general increase in the prices of goods i.e. inflation, this means that inflation could actually be an agent of economic growth.

For most experts a little bit of inflation can actually be a good thing. Hence they would like the Fed to generate an inflation “buffer” to prevent the economy from falling into a deflationary black hole.

They hold that a rate of inflation of around 3% could be the appropriate protective “buffer”. It is held by mainstream thinkers that inflation of 3% is not harmful to economic growth, however inflation of 10% could be bad news.

On this way of thinking at an inflation rate of 3% consumers will not postpone their spending on goods and hence will not set in motion an economic slump.

But then, at a 10% rate of inflation, it is likely that consumers are going to form rising inflation expectations.

According to popular thinking, in response to a high rate of inflation consumers will speed up the expenditure on goods at present, which should boost the economic growth. So why then is a rate of inflation of 10% or higher regarded by experts as bad thing?  Clearly this type of thinking is problematic.[1]

A general fall in prices can also emerge as a result of a fall in the money stock. An important cause for such a fall is a decline in fractional reserve lending. The existence of the central bank and fractional reserve banking permits commercial banks to generate credit which is not backed up by real saving i.e. credit out of “thin air.”

Once the un-backed credit is generated it creates activities that the free market would never approve, i.e. these activities consume and do not produce real wealth. As long as the pool of real saving is expanding and banks are eager to expand credit various false activities continue to prosper.

Consequently, the performance of various activities starts to deteriorate and bank’s bad loans start to rise. In response to this, banks curtail their loans by not renewing maturing loans and this in turn sets in motion a decline in the money stock.

(It must be realised that it is only commercial bank lending that is not backed up by proper savings (fractional reserve banking) that can disappear into “thin air” thus causing the decline in the stock of money. Money, which is fully backed up by savings, once repaid by the borrower to the bank, is passed back to the original lender and therefore cannot disappear unless the original lender decides to physically destroy it. From this we can infer that the greater the percentage of credit out of “thin air” is in relation to overall credit the greater is the risk of a large fall in the money stock once the pool of real savings starts declining).

The point that must be emphasized here is that the fall in the money stock that precedes price deflation and an economic slump is actually triggered by the previous loose monetary policies of the central bank and not the liquidation of debt.

It is loose monetary policy, which provides support for the creation of un-backed credit. (Without this support banks have difficulty practicing fractional reserve lending). The un-backed credit in turn leads to the reshuffling of real savings from wealth generators to non-wealth generators. This in turn weakens the ability to grow the pool of real savings and in turn weakens economic growth.

It must be also emphasized here that another important factor that undermines the pool of real savings is government outlays. The larger the outlays are the more real savings are diverted from wealth generators.

Many commentators including Bernanke are of the view that a fall in prices raises the debt burden and causes consumers to repay their debt much faster. (Rather than using the money in their possession to buy goods and services, consumers use a larger portion of their money to repay their debt).[2]

On this way of thinking a continuous debt liquidation could put severe pressure on the money stock and in turn on households demand for goods and services. All this, it is held, could lead to a prolonged decline in the price level.

A fall in the price level in turn raises the debt burden and leads to a strengthening in the process of debt liquidation. Hence to prevent this downward spiral aggressive monetary pumping by the central bank is recommended.

Again the debt liquidation and emerging price deflation are not the causes of the economic slump but the necessary outcome of the previous loose monetary policies of the Fed that have weakened the pool of real savings.

Also note that it is not a fall in prices as such that raises the debt burden and intensifies price deflation but the declining pool of real savings. The declining pool weakens the process of real wealth generation and in turn weakens borrowers’ ability to serve the debt.

Contrary to the popular view, in this situation the more money the Fed pushes into the economy the worse the economic conditions become. The reason for this is that more money only weakens the wealth generating process by stimulating non-productive consumption (consumption that is not preceded by the production of real wealth).

Why deflation heals the economy

This amounts to the disappearance of money that was previously generated out “of thin air.” This type of money gives rise to various non-productive activities by diverting real saving from productive real wealth generating activities.

A fall in the money stock undermines various non-productive activities; it slows down the decline of the pool of real savings and thereby lays the foundation for an economic revival.

The emergence of deflation is the beginning of the process of economic healing. Deflation arrests the process of impoverishment inflicted by prior monetary inflation. Deflation of the money stock, which as a rule follows by a general fall in prices, strengthens the producers of wealth, thereby revitalising the economy.

Obviously the side effects that accompany deflation are never pleasant. However, these bad side effects are not caused by deflation but rather by the previous inflation. All that deflation does is shatter the illusion of prosperity created by monetary pumping.

Contrary to the popular view then, a fall in the money supply i.e. money out of ‘thin air’, is precisely what is needed to set in motion the build-up of real wealth and a revitalising of the economy. Printing money only inflicts more damage and therefore should never be considered as a means to help the economy.

Despite the almost unanimous agreement that deflation is bad news for the economy’s health, this is not the case. As we have seen deflation comes in response to previous inflation. This amounts to the disappearance of money that was previously generated out “of thin air.” This type of money gives rise to various non-productive activities by diverting real saving from productive real wealth generating activities.

Obviously then, a fall in the money stock on account of the disappearance of money out “of thin air” is great news for all wealth generating activities since the disappearance of this type of money arrests their bleeding. Since a fall in the money stock undermines various non-productive activities it slows down the decline of the pool of real savings and thereby lays the foundation for an economic revival.

One reply on “Is deflation the root of all evil?”