Tim Congdon’s recent article, for the excellent Critical Reaction website, illustrates only too clearly the MPC’s complacent disregard for its remit to target inflation at 2%.

Tim Congdon’s recent article, for the excellent Critical Reaction website, illustrates only too clearly the MPC’s complacent disregard for its remit to target inflation at 2%.

Even if (Andrew) Sentance is right, a relaxed monetary stance serves the useful purpose at present of making it easier for the UK government to press on with necessary fiscal consolidation. Admittedly, the Bank of England’s job is to keep inflation in line with the official target, not to support the government’s programme to restore fiscal sustainability. Even so, there may be a tacit understanding of some sort between the Bank and the government, that the Bank will take a relatively permissive view of the inflation target while the deficit is being curbed. And in my opinion, quite right, too.

This comes close to admitting what many of us have suspected that the Bank and HMG, while paying lip service to inflation targeting, actually, post the credit crunch, are only concerned with promoting growth and ensuring there is not a double dip. Without debating the legitimacy of the formal Bank of England remit (this author believes that the remit is far too narrow) this policy risks disaster.

It is clear that the Bank of England has, to date, consistently underestimated the persistence of inflation. The charts below show RPI and CPI since early 2007. Despite the worst recession in 50 years CPI (which underestimates inflation) has remained well above the official target while RPI has now reached 5%. The Bank persists with the notion that the ‘output gap’ will mute inflation and so called one off factors, like the increase in VAT. Given the official remit of the Bank this complacency is staggering. Indeed despite recent strong GDP numbers, and persistent inflation, the MPC still whisper that they may even need to extend QE as well as maintain rates at near zero for the foreseeable future. Only Andrew Sentance sees sense. 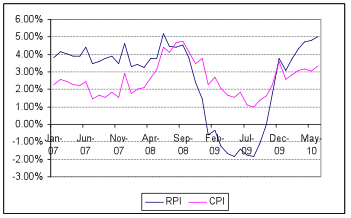 However Tim Congdon’s article is important because he implies that the Bank is in cahoots with HMG in believing a little bit of inflation might be a tad useful ‘to help the government press ahead with the necessary fiscal consolidation.’

If true, this is a highly dangerous strategy indeed. Inflation, once embedded, can be very difficult to eradicate and I would argue that the current policy, started by the previous Government, and broadly continued by this administration risks a loss of monetary confidence. Certainly the Keynesian aspect of the last regime is in the process of being ditched, as, thankfully, public sector austerity seems to be taken seriously. This is important and will be a genuine achievement of the Coalition, if implemented, but the monetary policy remains highly dangerous. ‘Near free’ money coupled with £200bn of newly minted QE, with the threat of possibly yet more, has expanded the monetary base of the banks and arguably distorted, downwards, the yield curve. Propensity to lend today may be low, but it is from highly elevated aggregate levels, and monetary velocity, as Congdon accepts, is a notoriously difficult animal to predict. To assume it will remain subdued, with the greatly expanded monetary base, is dangerous.

The ‘helicopter monetarists’ like Congdon believe, like the central planners of the old Soviet Block, that they can omnipotently manage the money supply — print a bit here when it contracts, magically withdraw a bit there when it over heats, and take our economy to the high plateau of stability. The reality is that this arrogance could well spell disaster. It is in any case a million miles from a market solution.

Despite strong evidence of the embedded nature of inflation, the MPC persists in talking about the mythical output gap, which in  a modern, global, service based economy, is in my view increasingly irrelevant. Lending growth may be subdued, but let’s not forget that consumers and HMG remain very heavily in hock. Sterling, despite its recent modest recovery, is still in the doldrums making imports somewhat more expensive. Asset prices are through the roof. Without the inappropriate monetary policy real estate values would be 25-40% lower than the highs now achieved. This may sound good for property owners, like this author, but it is a major distortion and leaves individuals impotent to make decisions as they try and second guess the machinations of the central monentary policy makers.

It creates moral hazard. It rewards the imprudent over the prudent, the elderly and those of fixed income. A poor example indeed.

Congdon’s article in Critical Reaction does us all a favour. It is honest and explains very clearly that the MPC and HMG are quite happy with a bit of inflation — it suits their purpose. For the rest of us, don’t be a bond holder, don’t hold cash, don’t be old and don’t be prudent.

0 replies on “The Cat is out of the Bag”