It’s the injustice of the current system that feels so appallingly wrong.  If you do not work in the financial services industry or for the government, then you should feel angry at the political shenanigans of last few years, for it is you who have paid for their mismanagement and extravagance and both you and your children who will continue to pay for years to come.  Not content with the shameful plunder of these last 30 years, the vested interests seek to maintain the same structures in place to allow it to persist, enriching themselves at the expense of the rest.

The common man has an inkling of who is to blame.  A straw poll of grievances of the bloke down the pub will often finger ‘bankers’ and ‘politicians’ as the rogues in our society, but he is unable to identify just how they pulled off this trick of empoverishing him.  He doubts himself as he does when he looks in his wallet leaving the pub after one beer too many thinking “I’m sure I had another tenner here somewhere”.

The free market is a fair system through which an entrepreneur can only become rich through serving the needs of his customers better than any other provider.  This should therefore result in beneficial systemic effects that all can enjoy.  As Von Mises wrote

‘A “chocolate king” has no power over the consumers, his patrons. He provides them with chocolate of the best possible quality and at the cheapest price. He does not rule the consumers, he serves them. The consumers are not tied to him. They are free to stop patronizing his shops. He loses his “kingdom” if the consumers prefer to spend their pennies elsewhere’.

So how did the bankers manage to pickpocket our pub-goer without him realising?  How did he cheat the free market system?

At its most basic, banking should be a management function whereby transactions are facilitated and savings passed efficiently to investment opportunities with the best prospects.  It is the success of these projects that provides the goods for all to consume in the future, and they are only successful if – like the chocolate king’s chocolate – consumers are willing to buy them.  Financial services are an indispensable part of the economy, created for and ultimately demanded by consumers.

But, we ask ourselves, how did there get to be so many of these financial managers, and why are they paid so much money?  Ordinarily the right number in any industry and remuneration will also be decided by market processes.  Too many financial managers will mean that any profits from the financial firm are eaten away, such that the industry is forced to shrink.  Surely it cannot be an efficient allocation of resources to see their numbers growing faster each year relative to the size of the economy.  And yet this is what we have.

In the chart above the term “value added” does not seem apposite.  However, it is be indicative of the size of the industry relative to the overall national economies.

As banks create new credit, all these new loans earn interest, making the banks more profitable, allowing the hiring of new people so that their businesses can expand.  Banks have been able to expand their loan books without fear of these loans being called in, only because of they have a direct credit line from the central bank, which was has the ability to print new money.

The creation of new credit has pushed down the interest rate available below its sustainable long-term rate, and has allowed consumers pay more for assets, and so bid up their prices.  All those therefore working in areas of the economy who charge a fee on assets have also therefore benefited (fund managers, estate agents etc.).  This is captured in the numbers above.

Is it reasonable that more than 30% of the UK economy is now engaged in providing financial paper shuffling of one kind or another? This is not just due to the UK selling financial products overseas.  The trend of financial services becoming a greater proportion of overall economies is global, ubiquitous and is entirely down to over-cheap money.

Credit created today has the effect of driving up asset prices as mentioned.  It causes inflation down the line but this does not hit wages for the non-banks’ employees until much later.  The credit created tends to be deployed in the loans market first (the central banks’s favourite way to inject money into the system is to buy government debt).  This in turn has forced up the value of other financial assets, equities and houses.  However, the price inflation does not hit the average wage earner’s pocket until all the other prices have gone up beforehand.  Although his wages do not decline in pounds sterling, his purchasing power is taken from him, just the same, expropriated by the banks.

This situation is only possible as a result of the existence of the central bank.  Without it, the commercial banks would be checked in their efforts to create more credit and the government would have no funding instrument and would have to reduce its spending.  Back in the days before central banks, governments themselves went bust.  Alas no longer.

So where does this leave our bloke down the pub?  He should be livid! He is squeezed between a hungry bank and a bloated government.  He can do little about it other than attempt to join these two favoured groups, which of course explains their expansion. 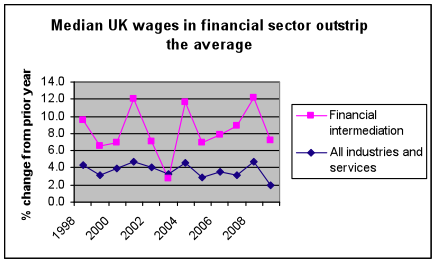 Note that the chart above tracks nominal wages.  When adjusted for inflation, we see that the median man has made little progress at all, if any, over the last 10 years.

The average man works hard in order that he might share in the gains that result from our society becoming more productive, is robbed every single day that he picks up his wage packet, the gains that would normally be seen as a result of falling prices spirited away out of his wallet without his knowledge.

It would be easy to blame individual bankers, or even the whole industry for this sordid con-trick.  However, each of the participants within the banking industry is only acting in his best interests.  The individual banker that did not take advantage of the subsidy granted to the entire industry in the form of central bank printing would be at a severe disadvantage relative to his competitors and may go out of business as a result.

The US Federal Reserve is playing with the idea of raising interest rates, possibly as early as September this year. After a six-year period…