Most commentators are of the view that the key for US economic recovery is drastically lowering the number of unemployed Americans. Once more people will be employed, this is going to lift overall spending in the economy and consequently general economic activity will follow suit, so it is held. We suggest that unemployment is not the key issue for economic growth. What matters for individuals is not whether they are employed as such but the purchasing power of their earnings. The key for this is the infrastructure individuals utilize in the production of goods and services. What permits an increase of the production of goods and services and hence raises people’s living standards is an expansion and enhancement of infrastructure. What in turn permits this is an expanding pool of real savings. Contrary to popular thinking, the Fed’s and the government policies that are aiming at lowering unemployment don’t improve people’s living standards, but on the contrary they undermine the process of real wealth generation and thus set in motion an economic impoverishment. In fact the latest government data indicates that many more Americans have fallen below the poverty line in 2009 despite all the massive stimulus packages. For the time being, the latest US economic data remains subdued. Also in China a visible fall in the growth momentum of money supply M1 raises the likelihood of a visible fall ahead in economic activity indicators.

Is a reduction in unemployment the key to US economic recovery?

Most experts are almost unanimous that the key to economic recovery is a reduction in the unemployment rate, which stood at 9.6% in August. The number of unemployed stood in August at almost 15 million. Also the under-employment rate climbed to 16.7% in August from 16.5% in the month before. 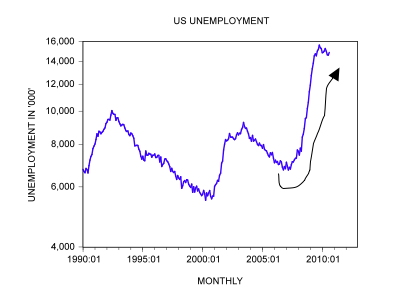 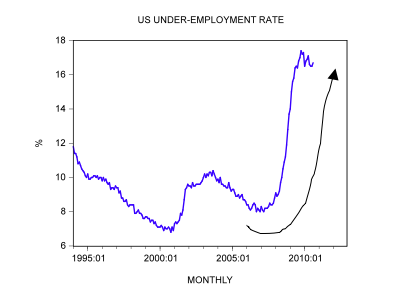 In our report last week we have shown that the main driver of economic growth is an expansion in the pool of real savings. Fixing unemployment without addressing the issue of real savings is not going to lift the economy.

We have seen that it is real savings that fund the enhancement and the expansion of the infrastructure. An enhanced and expanded infrastructure permits an expansion in the production of final goods and services required to maintain and promote individuals life and well being.

Now, if unemployment were the key driving force of economic growth then it would have made a lot of sense to eradicate unemployment as soon as possible by generating all sorts of employments. For instance, policy makers could follow the advice of Keynes and Paul Krugman and employ people in digging ditches, or various other government sponsored activities. Again the aim is just to employ as many people as possible.

A simple common sense analysis however would have quickly established that such a policy would amount to a waste of scarce real savings. Remember that every activity whether productive or non-productive must be funded. Hence employing individuals in various useless activities would lead to a transfer of real savings from wealth generating activities and thereby undermine the real wealth generating process.

Now the unemployment as such can be relatively easy fixed if the labour market were to be free of tampering by the government. In an unhampered labour market any individual that wants to work will be able to find a job at a going wage for his particular skills. Obviously if an individual will demand a non market related salary and is not prepared to move to other locations, etc, there is no guarantee that he will find a job. For instance, if a market wage for John the baker is $80,000 per year yet he insists on a salary of $500,000 obviously he is likely to be unemployed.

Over time a free labour market makes sure that every individual earns in accordance to his contribution to the so called overall “real pie”. Any deviation from the value of his true contribution sets in motion corrective competitive forces.

As we have seen the key for an enhanced and expanded infrastructure is the increase in the pool of real saving. Consequently any government and central bank policies aimed at lowering unemployment by means of stimulus policies amounts to a policy of redistribution, which leads to economic impoverishment, i.e. undermines the living standards of most individuals.

According to the government data the percentage of Americans living in poverty rose to 14.3% in 2009 from 13.2% in 2008 – its highest level since 1994. A record 43.6 million Americans were living in poverty last year, the Census Bureau reported. Note that the increase in poverty came about in-spite of massive fiscal and monetary stimulus measures, which supposedly meant to lift people’s living standards. 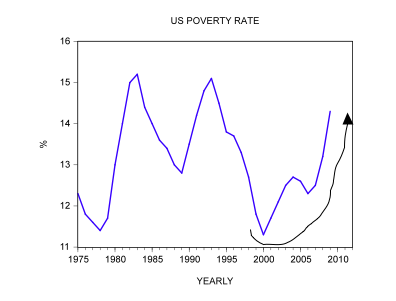 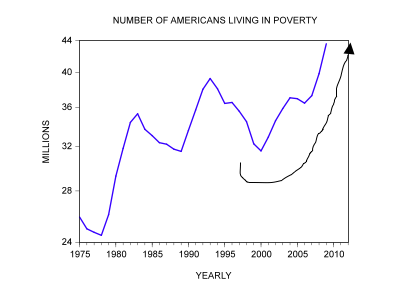 Even the former Fed Chairman Alan Greenspan is getting uneasy with all the stimulus measures to which the American economy has been subjected. At the gathering on September 15 held at the Council on Foreign Relations in New York he said,

We have to find a way to simmer down the extent of activism that is going on with government stimulus spending and allow the economy to heal itself.

Unfortunately Alan Greenspan is currently in the minority on this issue. As a result, we have been constantly reminded that the Fed is carefully watching the unemployment market and other economic activity data.

This means that if the unemployment does not show any sign of a reasonable decline then the Fed is likely to push more money into the economy.

For the time being we have been spared another onslaught by the Fed because US central bank officials differ on the question of how weak the economic outlook should get before they start pushing a massive amount of money.

In the event Fed policy makers do agree to renew their stimulus program, a likely option is that they will adopt resuming a bond-purchasing program.

The point of buying bonds is to drive down long-term interest rates and encourage more private borrowing. This it is held will give boost to economic growth.

The artificial lowering of interest rates cannot as such lift the supply of credit if the pool of real savings is in trouble. Remember that banks just fulfill the role of intermediaries – they can facilitate available real savings. However, they cannot create real savings – the key for economic growth.

It follows then that an artificial lowering of interest rates cannot generate more lending that is fully backed by real savings. The only credit that commercial banks can expand is credit out of “thin air”, or inflationary credit.

At present we are observing that commercial banks are starting to make use of the massive amount of cash reserves pumped by the Fed during September 2008 to October 2009. (For instance the yearly rate of growth of the Fed’s balance sheet jumped to 152% in December 2008 against 3.8% in January of that year).

In early September the level of commercial bank excess reserves stood at $1.007 trillion versus $1.026 trillion in August and $1.192 trillion in February.

As a result the latest data shows that the inflationary credit of commercial banks is starting to display a visible strengthening. The yearly rate of growth of this type of credit stood at 4.2% so far in September against minus 13.6% at the end of February. 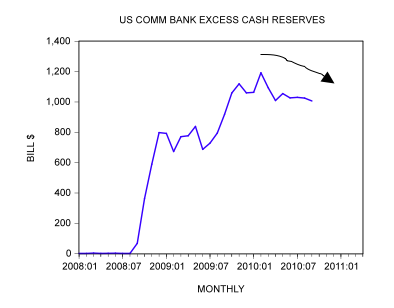 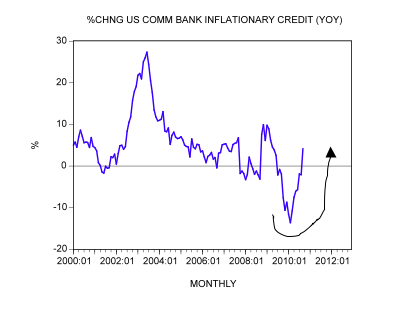 After closing at 2.4% in June the yearly rate of growth of our monetary measure AMS, which excludes Treasury special financing accounts, climbed to 3.9% in early September. 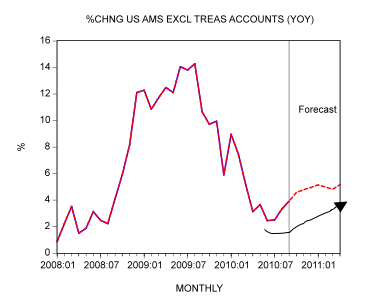 We suggest that if banks were to start utilizing the surplus cash reserves much faster than what they are doing currently this is likely to prompt Fed officials to express concern. 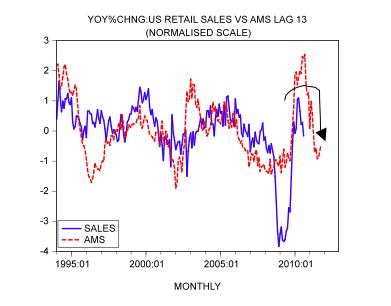 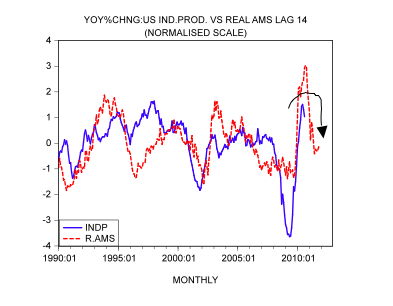 Furthermore, the New York Fed manufacturing index fell to 4.14 in September from 7.1 in the previous month. A record number of US homeowners lost houses to their banks in August. Banks foreclosed on 95,364 properties in August, topping the May 2010 record by 2%. Total foreclosure actions last month, including notice of default, scheduled auction and repossession, were made on a total of 338,836 properties in August, up 4% from July. One in every 381 housing units got a foreclosure filing last month. 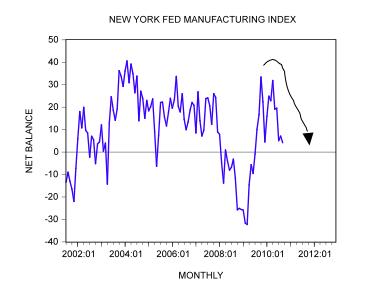 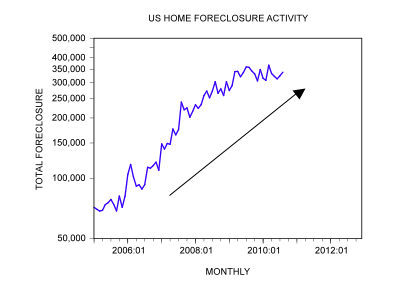 0 replies on “Is there a link between unemployment and economic growth?”