A professionally-shot and edited video of Cobden Centre Senior Fellow Jesús Huerta de Soto’s recent scintillating and inspirational speech at the LSE, delivered on the 28th of October, 2010, will be available soon at the Cobden Centre. In the meantime, Brian Micklethwait and I thought that we would release an audio podcast preview of this speech on Cobden Centre Radio, to share and spread the message of this incredible Promethean bearer of the economic torch of Ludwig von Mises, himself a Promethean bearer of the torch of the University of Salamanca, led by the Spanish theologians, rooted in the scholastic work of Francisco de Vitoria, brought to us through the ages and linking us through to Thomas Aquinas and Aristotle. 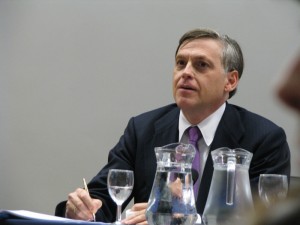 Look forward to the video; in the meantime, here is the complete speech as recorded via the technical wizardry of Brian with his Zoom H2 Handy recorder and some guerilla recording techniques as employed in the Sheikh Zayed theatre, at the London School of Economics, for the 2010 Hayek Memorial Lecture, as sponsored by Toby Baxendale, our Cobden Centre Chairman; Professor Huerta de Soto is introduced by Professor Tim Besley of the LSE:

The full text of the speech can be found here.

There is an alternative MP3 recording of the speech, provided by the LSE, which you can listen to here.

[By the way, listen out for the spontaneous break out of applause towards the end of the lecture when Huerta de Soto calls for a ‘Bank of Amsterdam’-style return to a 100% monetary reserve standard based upon gold.]

Written By
Andy Duncan
More from Andy Duncan
There are three books that take pride of place in my Austrian...
Read More