Money growth differential puts pressure on the US$

At the end of September the price of the Euro in US$ terms closed at 1.357 – an increase of 7% from the end of August. The yearly rate of growth of the price of Euro stood at minus 7.3% in September against minus 11.5% in the month before. 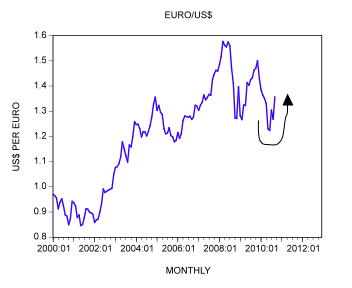 An important factor in setting the purchasing power of money is the supply of money. If over time the rate of growth in the US money supply exceeds the rate of growth of European money supply, all other things being equal, this will put pressure on the US$. Since a price of a good is the amount of money asked for the good, this now means that the prices of goods in dollar terms will increase faster than prices in euro terms, all other things being equal.

As a result an identical basket of goods is priced now, let us say at $2, as against 2.5 euro. This would imply that the exchange rate between the US$ and the euro will be now 1.25 euros per one dollar. Note the fact that changes in a money supply affect its general purchasing power with a time lag means that changes in relative money supply affect the currency rate of exchange also with a time lag. (When money is injected into the economy it starts with a particular market before it goes to other markets – this is the reason for the lag. When it enters a particular market it pushes the price of a good in this market higher – more money is spent on given goods than before). This in turn means that past and present information about money supply can be employed in ascertaining likely future moves in the currency rate of exchange.

Let us say that the Fed raises its policy interest rate while the European central bank keeps its policy rate unchanged. We have seen that if the price of a basket of goods in the US is one dollar and in Europe two euros, then according to the purchasing power framework the currency rate of exchange should be one dollar for two euros. As a result of a widening in the interest rate differential between the US and the Euro-zone an increase in the demand for dollars pushes the exchange rate in the market toward one dollar for three euros. This means that the dollar is now overvalued as depicted by the relative purchasing power of the dollar versus the euro.

In this situation it will pay to sell the basket of goods for dollars then exchange dollars for euros and then buy the basket of goods with euros – thus making a clear arbitrage gain. For example individuals will sell a basket of goods for one dollar, exchange the one dollar for three euros, and then exchange three euros for 1.5 basket, gaining 0.5 a basket of goods. The fact that the holder of dollars will increase his/her demand for euros in order to profit from the arbitrage will make euros more expensive in terms of dollars – pushing the exchange rate in the direction of one dollar for two euros.  (We suggest that the arbitrage will always be set in motion if the rate of exchange deviates, for whatever reasons, from the underlying rate of exchange).

Since November 2009 the money growth differential between the US and the Euro-zone has been in a visible increase. After closing at minus 24% in November 2009 the differential jumped to minus 4.2% in August this year. We suggest that the strengthening in the differential is the key reason for the underlying strengthening in the Euro against the US$. Given the relatively more conservative Euro-zone central bank versus the US central bank it is quite likely that the money growth differential will continue to strengthen further – thus providing further support to the Euro. 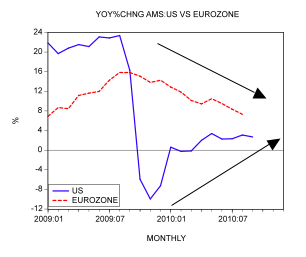 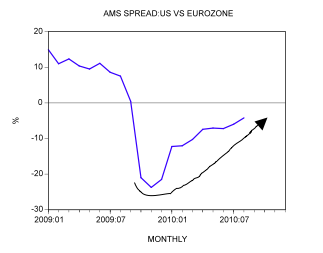 After closing at minus 3.7% in April the growth differential between US and Euro-zone industrial production climbed to 0.11% in August. We envisage that in the months ahead the differential is likely to stabilize at the August figure. So from this perspective the slight increase in the differential is likely to provide only marginal support to the US$ versus the Euro. The differential between the federal funds rate and the European central bank policy interest rate is likely to stand at minus 0.75% in the months ahead. (The fed funds rate is forecast at 0.25% while the ECB rate at 1%). So from this perspective it is going to have neutral effect on the price of Euro in US dollar terms. 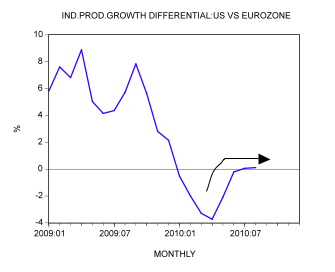 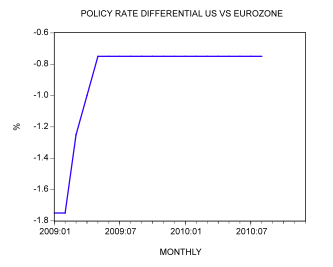 Again we maintain that the strong support for the Euro versus the US$ is on account of a strengthening in the money growth differential since November 2009. (Note again that the effect from changes in money supply and the differential works on the currency rate of exchange determination with a time lag). This means that the US$ is likely to remain under pressure. An increase in the industrial production differential is likely to mitigate the strengthening of the Euro against the US$. On a short-term basis the price of the euro in US dollar terms appears to be just about “right” as far as the valuation versus its 12-month moving average is concerned. The price to its 12-month moving average ratio stood at 1.0 in September versus 0.9 in August. Note that in September last year the ratio stood at 1.08. 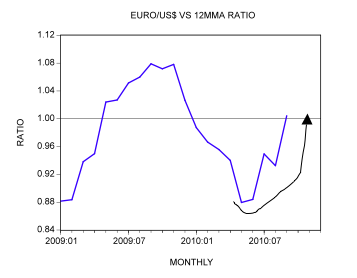 Prospects for the Yen against the US dollar 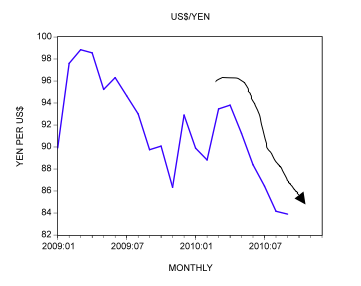 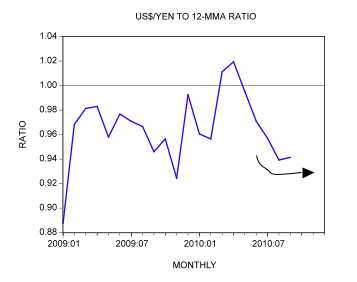 Since November 2009 the money growth spread between the US and Japan has been trending up. The differential stood at 2.8% in August against 2.1% in July and minus 13% in November last year. Now after falling to minus 29.1% in February the industrial production growth spread between the US and Japan climbed to minus 9.2% in August. In the months ahead we expect the growth spread to stabilize at around the August figure. The interest rate spread doesn’t have much importance at present given the policy rates in US and Japan are close to nil. We suggest that in the months ahead the money growth differential is likely to dominate the currency rate of exchange scene. This implies that the price of the US$ in yen terms is likely to remain under pressure. 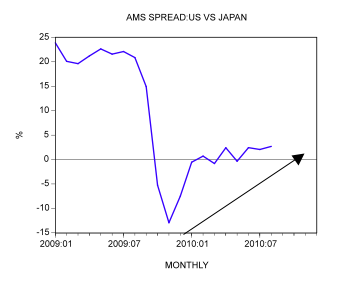 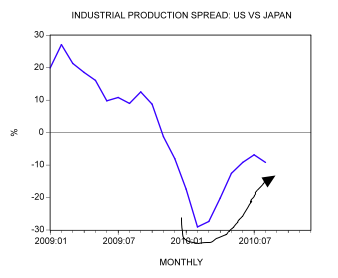 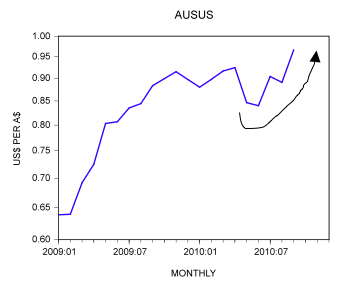 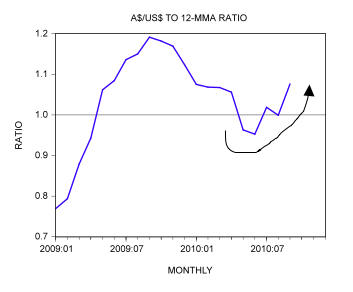 A major factor behind the strengthening in the A$ against the US$ is a visible strengthening in the money growth differential between the US and Australia. After falling to minus 15% in November last year the differential shot up to 9.1% in June before settling at 7.6% in August. From the demand for Aussie dollars perspective a strong increase in the price of gold provides important support for the Australian currency versus the US dollar. From these two key factors we suggest that for the time being the Aussie dollar is going to be well supported in the months ahead, all other things being equal.

0 replies on “Money supply and the US dollar”